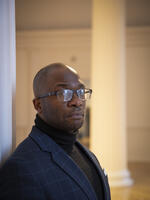 Horace D. Ballard, Ph.D. is the Curator of American art and Curator-in-charge of Photography at the Williams College Museum of Art (WCMA). He is also a lecturer in the Graduate Program in the History of Art at The Clark Art Institute, where he teaches courses on eighteenth-, nineteenth, and twentieth-century portraiture of the Atlantic world; the visual cultures of religion; the history of landscape in black aesthetics; and queer visual taxonomies. Ballard received bachelor degrees in English Literature and American Studies from the University of Virginia and his M.A. in Religion and Visual Culture from the Institute of Sacred Music [ISM] and Yale Divinity School. He graduated from the doctoral program in American Studies and American Visual Culture at Brown University. Before joining the team at Williams, Ballard worked in the education, interpretation, and public programs departments of Monticello, the home of Thomas Jefferson; the Fralin Museum of Art; the Birmingham Museum of Art; the Yale University Art Gallery; and the Museum of Art of the Rhode Island School of Design.