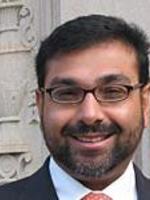 The Rev. Neal Christie is Assistant General Secretary of the United Methodist Board of Church and Society (GBCS) for Education and Leadership Formation. Neal has served GBCS since 1996 and is an ordained Elder in the Greater New Jersey Conference of The United Methodist Church. In addition to his degree from Yale Divinity School, Neal holds degrees from New School for Social Research in New York City and Princeton Theological Seminary in New Jersey and has done additional graduate work in conflict resolution at the School of International Service, The American University in Washington D.C.

Neal has not only served in churches in New York City, Connecticut, and New Jersey, but also as a hospital chaplain and in prison ministry. For the Conference Board of Church and Society, Neal served as chair of the Conference Commission on Religion and Race, and on the Conference Evangelism Committee.  Employing his ministerial expertise, Neal has authored numerous publishes prayers, articles, and chapters, and has produced DVD resources for use by congregations, “Forged by Fire” and “Out of Egypt.”

Neal has also recruited, designed, and facilitated experiential seminars and workshops and served as keynote speaker at events focused on spiritual formation and justice for youths, young adults, college students, laity and clergy leaders in conferences across the U.S. He has also led advocacy seminars in Jordan, Egypt, Turkey, Israel and the West Bank.