HomeNews & MediaNewsDean Greg Sterling: 'I stand in solidarity with you'

Dean Greg Sterling: ‘I stand in solidarity with you’

Yesterday was a very long day. Like many of you, I got up early to see the final results of the election. I thought that I knew what they would be before I went to bed. I then headed to the airport to travel to Los Angeles. As I flew across the continental United States, I glanced down and thought about our country: the terrain was familiar, but the feeling was not. 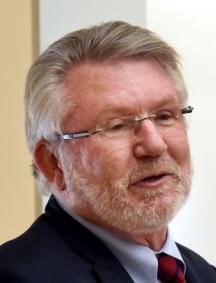 We are a democracy, a form of government that allows for change–change for the better and change for the worse. I am grateful to belong to a system that permits people to exercise power, even when I do not like the results of that power. May we all remember this.

We are now on the other side of one of the most contentious political campaigns in American history, a campaign that exposed our differences more than it highlighted our similarities. What role should our community play–and churches more broadly–in addressing those differences?

Let me suggest three. First, we need to be agents of conversation and change. One of the things that became apparent Tuesday was that there are a large number of Americans who do not think that their voices have been heard. Red-faced pollsters have been trying to explain where they went wrong in their predictions. It is not simply that the pollsters overlooked a segment of society, they did not grasp the frustration of so many–of people on the right and the left. The most impassioned citizens in the election were those who supported candidates who articulated their anger and called for the greatest changes. There is a great deal of sentiment for change. The question is what direction will that take in the long run?

Some are thinking that now is not the time to talk, but to act. However, there is no real change without having conversations first. One of the problems that we have is that we do not have reasoned dialogue; we have accusatory debates. We are either silent or we shout in impassioned ways that drive wedges deeper rather than providing occasions for genuine exchanges. We need to listen in order to understand rather than to refute. I urge churches to become places where moral issues can be aired and discussed, places where more than one side of the issue can be voiced and heard. We have failed to do this in the past, but can no longer afford to fail in this role.

Second, we need to awaken the moral consciences of Americans–a role that churches and Christians have played in the past, but much less so in recent years. We must do this on a number of major issues. At this moment, I am particularly concerned about a number of groups: women, African-Americans, Latinos/as, LGBTQ individuals, immigrants, refugees, and Muslims to mention the groups foremost on my own mind. If you are part of one or more of these groups, you must feel that America has rolled back the clock and exacerbated your worst fears. As a straight white male I will not pretend to see through your eyes, but I can–and do–stand in solidarity with you. We must all stand together to protect the most vulnerable. This is an issue not only of human rights but of moral right for those of us who consider ourselves Christians.

Third, we need people who will lead in society and do so with the conscience of a Christian. I do not mean that we should impose values on others, but that we should take up the role of a public servant. I think of Senator Chris Coons ’92 M.A.R. and Representative David Price ’64 B.D., whom I know personally. They have modeled this kind of leadership as have many others. When I arrived in Los Angeles last night I had dinner with Marylouise Oates ’73 M.Div. and her husband Bob Shrum. Oatsie–her preferred name–is best known for her society column in the Los Angeles Times; however, she has devoted her life (and so has Bob) to supporting civil rights for many groups. Ministry is not limited to a church building. Ministry is a call to service that can be answered in many fields.

I have tried to learn to think of challenges as opportunities, opportunities to make things better. We cannot afford to be naïve, but neither can we afford to be paralyzed. We can do a great deal if we work together. The opportunity awaits.