Will Willimon earned degrees from Wofford College (B.A.), Yale Divinity School (M.Div.), and Emory University (S.T.D.). A dozen colleges and universities have awarded him honorary degrees. He is the author of roughly 90 books and has served as Bishop of the United Methodist Church. One of his most recent books is Accidental Preacher: A Memoir, which portrays his formative years at YDS. For 20 years he was Dean of Duke University Chapel. Earlier this year, Will’s preaching was the subject of a PBS documentary, “A Will to Preach.”

In his Beecher Lectures, Willimon explored what he describes as the “astounding claim” at the heart of Christian faith: the claim that God speaks. “Against all odds, preachers dare to speak to, with, and for the God who has spoken to us,” Will explains. “The best justification for the practice of Christian preaching is theological: God in Christ is determined to be in conversation with creation through a peculiar people who respond to God’s address by daring publicly to repeat what they’ve heard.”

The title of his Beecher Lectures, “preachers dare,” was coined by Karl Barth, whose work Willimon began to study during his student days at YDS and has remained one of his long-standing research interests. It is also the title of a book he published in 2020 (Abingdon Press).

One of the most distinguished lecture series on preaching in the world, the Divinity School’s Lyman Beecher Lectureship was founded in 1871 by a gift from Henry W. Sage of Brooklyn, N.Y., as a memorial to “the great divine whose name it bears,” to sponsor an annual series of lectures on a topic appropriate to the work of the ministry. 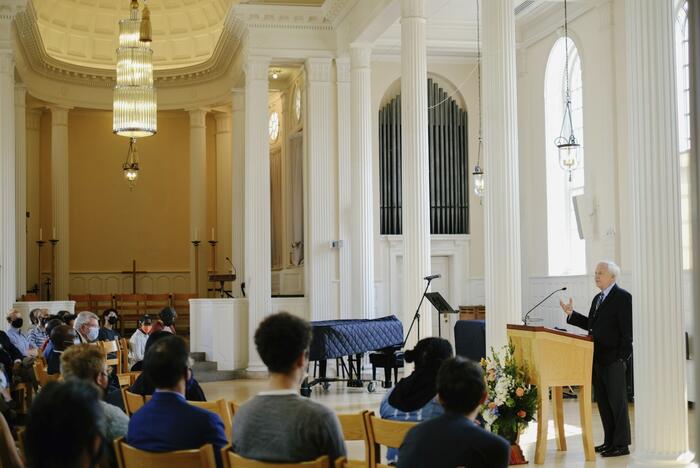