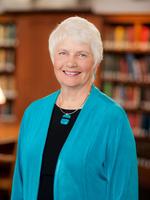 Barbara Lundblad is the Joe R. Engle Professor of Preaching at Union Theological Seminary in New York City. She received a B.A. in English from Augustana College, an M.Div. from Yale Divinity School, and a D.D. from Lutheran School of Theology in Chicago. She is an ordained minister in the Evangelical Lutheran Church of America (ELCA) and served 16 years as a parish pastor in New York City. She has been a campus pastor at Lehman College and New York University and has taught homiletics at several schools, including Yale Divinity School, Princeton Theological Seminary, Hebrew Union College, and in the D.Min. program of the Association of Chicago Theological Schools. She also served as president of the Academy of Homiletics in 2007 and has served on the Board of the Lutheran Medical Center in Brooklyn. As an accomplished author, her writing has been featured in the Lectionary Homiletics journal, an edited volume titled Women’s Voices and Visions of the Church: Reflections from North American (2005), and The New Interpreter’s Handbook of Preaching (2008). She has also published two books, Transforming the Stone: Preaching through Resistance to Change (2001) and Making Time: Preaching Biblical Stories in Present Tense (2007) which grew out of the Beecher Lectures she delivered at Yale Divinity School in 2000.