Office of the Dean

The mission of the Divinity School is to foster the knowledge and love of God through rigorous scholarly inquiry, the preparation of students for lives of transformative service, the promotion of broad inclusivity and diversity in our communal life, encounter with the sacred through music and the arts, and the advancement of the sustainability of the earth. Traditionally and primarily Christian in character, the school welcomes persons of all faiths and those of no faith.

A professional school within Yale University, the Divinity School is uniquely positioned to prepare leaders who will address the major issues confronting the global community. YDS prepares students through rigorous scholarly inquiry, corporate worship and spiritual formation, and engagement in a variety of practicing ministries for three major venues: lay and ordained Christian ministries; the initial stage of graduate preparation for the Academy and other professional guilds; and for public service or other careers. In all cases the school seek to help students understand the theological dimensions of their vocations.*

Nature of the Divinity School

Yale Divinity School is interdenominational and completely nonsectarian. The faculty is drawn from the major Christian traditions as well as other world religions. Students represent several dozen denominations and faith groups. Instruction is provided in the history, doctrines, and polity of all the major church bodies.

The Institute of Sacred Music was founded in 1973. It is affiliated with both the School of Music and YDS.

YDS offers programs of study leading to the degrees of Master of Divinity (M.Div.), Master of Arts in Religion (M.A.R.), and Master of Sacred Theology (S.T.M.). Programs for the degree of Doctor of Philosophy (Ph.D.) are offered by the Department of Religious Studies in the Graduate School of Arts and Sciences.

History of the Divinity School 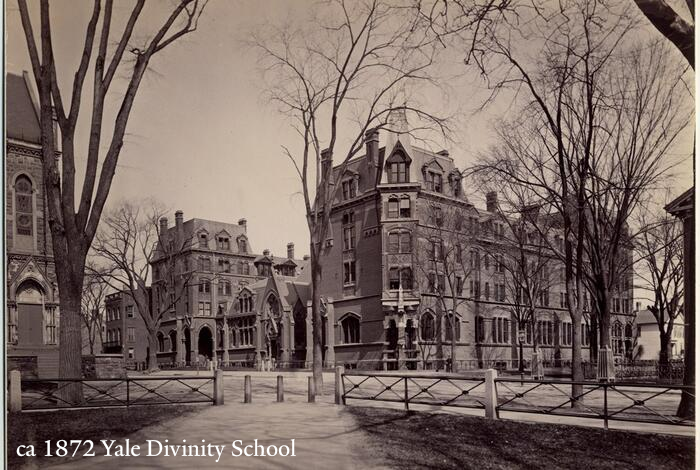 Training for the Christian ministry was a main purpose in the founding of Yale College in 1701. As expressed in its original charter, it was to be a school “wherein Youth may be instructed in the Arts & Sciences who through the blessing of Almighty God may be fitted for Publick employment both in Church & Civil State.” That purpose has always been recognized at Yale, and the history of the University is one of increasing development in the facilities for training for religious service.

During the early years of Yale College, its general curriculum, supplemented in some cases by a year or two of reading under the direction of its instructors, was deemed sufficient for ministerial preparation. But in 1822, in response to petitioning from students of theology who asked to be recognized as a distinct group, a professorship in theology was established, marking the formation of what was later to be known as the Yale Divinity School.

Divinity School classes were first held in rooms above the University chapel, and in 1835–36 Divinity College was constructed on what is now Yale’s Old Campus as the new home of the Divinity School. In 1869, two years after Yale awarded its first Bachelor of Divinity (B.D.) degree (changed in 1971 to the M.Div.), the cornerstone was laid for new Divinity facilities at Elm and College streets. The present home of the Divinity School, Sterling Divinity Quadrangle on Prospect Street, opened in 1932, the same year women were admitted for the first time as candidates for the B.D. degree. A $49 million renovation of the Georgian Colonial-style campus, where Marquand Chapel dominates as the central unifying monument, was completed in 2003.

Today, YDS is a thriving ecumenical school inclusive of a wide range of Christian traditions. The School graduates about 150 students every year, including many who enter pulpit ministries and others who embark on careers in chaplaincy, academia, law, medicine, business, social service, and the world of nonprofit agencies.

Berkeley Divinity School at Yale, located at Yale Divinity School for almost five decades, was founded by Bishop John Williams in 1854 in Middletown, Connecticut, to be a mediating seminary during a time of theological division in the Episcopal Church. In 1928 Berkeley moved to New Haven to better fulfill its mission by taking advantage of the resources of an urban center and a great university, a purpose that came to full fruition through its affiliation with Yale Divinity School in 1971.

The Yale Institute of Sacred Music (ISM) has operated in partnership with YDS since it was established at Yale in 1973. The Institute is a successor to the renowned School of Sacred Music at Union Theological Seminary in New York City. ISM trains musicians for churches, and it supports programs in choral conducting, organ performance, voice, and church music studies (with the Yale School of Music) and in liturgical studies and religion and the arts (both with YDS).

In 2017 Andover Newton Theological School, the oldest graduate theological school in the country, affiliated with YDS as Andover Newton Seminary at Yale Divinity School, becoming the third YDS partner institution on the Quad. The focus of Andover Newton is its celebrated tradition of ministerial formation and specialization in the training of ministers within locally governed congregational traditions.

Office of the Dean