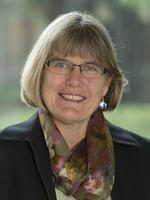 The Rev. Dr. Barbara R. Rossing is professor of New Testament at the Lutheran School of Theology at Chicago, where she has taught since 1994. An avid environmentalist, Rossing directs the seminary’s environmental ministry emphasis and teaches with interdisciplinary colleagues through the Zygon Center for Religion and Science. She was a participant in the three-year, multidisciplinary Enhancing Life Project, jointly sponsored by the University of Chicago and Ruhr-University Bochum in Germany.

Rossing received her B.A. from Carleton College, an M.Div. from YDS and a Th.D. from Harvard University. Her ministry experience includes serving as pastor of a congregation in Minnesota, director for Global Mission Interpretation for the American Lutheran Church, pastor at Holden Village Retreat Center, Chelan, Wash., and chaplain at Harvard University Divinity School.

She has lectured and preached widely, including at events for the Evangelical Lutheran Church in America (ELCA), as well as ecumenical theological conferences. She has served on several denomination-wide groups including the ELCA’s Executive Committee and the Council of the Lutheran World Federation (2003-2010), and as Chair of the Lutheran World Federation’s Theology and Studies committee. As a public theologian her media appearances have included “CBS Sixty Minutes” as well as The History Channel, National Geographic, Living the Questions, as well as numerous print and radio interviews.

Her publications include The Rapture Exposed: The Message of Hope in the Book of Revelation (Basic Books, 2004); The Choice Between Two Cities: Whore, Bride and Empire in the Apocalypse (Trinity Press, 1999); two volumes of the New Proclamation commentary (Fortress Press, 2000 and 2004); a nine-session Bible study, Journeys Through Revelation: Apocalyptic Hope for Today (Presbyterian Women, 2010); and articles and book chapters on the Apocalypse and ecology.