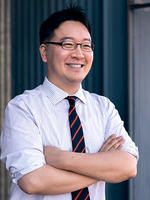 Chan Sok Park is Assistant Professor of Religious Studies at The College of Wooster in Wooster, Ohio. During his student years at YDS, Professor Park was actively involved in the Student Council and the Community Life Committee and served as a president of YDS Korean Student Association. Later he returned to the alma mater as a lecturer to teach the courses on the Gospel of John and Asian and Asian American Biblical Interpretation (2012-13). Professor Park specializes in the history and literature of the New Testament and early Christianity, cultural and racial/ethnic interpretations and receptions of the Bible, and global Christianity.