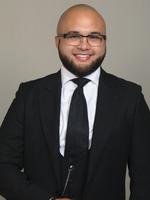 The Rev. Philippe E. C. Andal is a native of Nashville, Tennessee. Following graduation from the historic East Literature Magnet School, he attended Fisk University as an Ella Shepard Moore Scholar where he earned a Bachelor of Science in Business Administration as the Salutatorian of his class. While at Fisk, he served in multiple leadership capacities in the Religious Life and Student Life Programs, including being elected by his peers to the highest student office as the Student Government Association President.  In 2016, as a recipient of the Forest Knapp Scholarship, Rev. Andal graduated from Yale Divinity School, earning the Master of Divinity degree. While there, he continued to serve in multiple leadership capacities, including election to a one-year term as Secretary of the Yale Divinity School Student Council and appointment to the Admissions and Pastoral Care Faculty Search Committees. Recognized by the faculty as a dynamic preacher in his class, he was awarded the William E. Downes Prize for Highest Proficiency in Public Reading of the Scriptures and of Hymns and the Jesse H. and Hugo A. Norenberg Prize for Excellence in Preaching and/or the Conduct of Corporate Worship. In June 2017, Rev. Andal was chosen for a unique international ethics program by the Fellowships at Auschwitz for the Study of Professional Ethics which uses the conduct of clergy and other religious leaders in Nazi-occupied Europe as a way to reflect on contemporary professional ethics. Rev. Andal also contributes as a writer for Urban Ministries, Inc.’s Precepts for Living. Rev. Andal has a been blessed to serve at churches across the nation, including Mt. Zion Baptist Church in Nashville, TN, Burnett Avenue Baptist Church in Louisville, KY, and Wheeler Avenue Baptist Church in Houston, TX. Upon the recommendation of the American Baptist Churches of Connecticut, he was ordained to Christian Ministry by the Community Baptist Church (New Haven, CT) and currently serves this congregation as Senior Pastor.