Memoirs of a Southern Liberal by 98-year-old Robert Ayers ‘42 B.D. has been published by Bilbo Books Publishing. Not only is the author a Yale Divinity School graduate but so am I, his publisher!

Dr. Ayers was my mentor when I was an undergraduate student at the University of Georgia in Athens in 1959. He was Chaplain and Head of the Religion Department. One day, after the religion class I was taking under him, he encouraged me to go to Yale Divinity School as he had, and I did.

Shortly after founding Bilbo Books Publishing, in 2006, I moved back to Athens, where Dr. Ayers and I reconnected, and he asked me to publish his memoirs. In our discussions we found we both had studied Christian Ethics at YDS under H. Richard Niebuhr 20 years apart—the subject of many of our discussions. Niebuhr was also a member of Bob Ayers’ ordination committee and preached the ordination sermon when Bob was ordained. 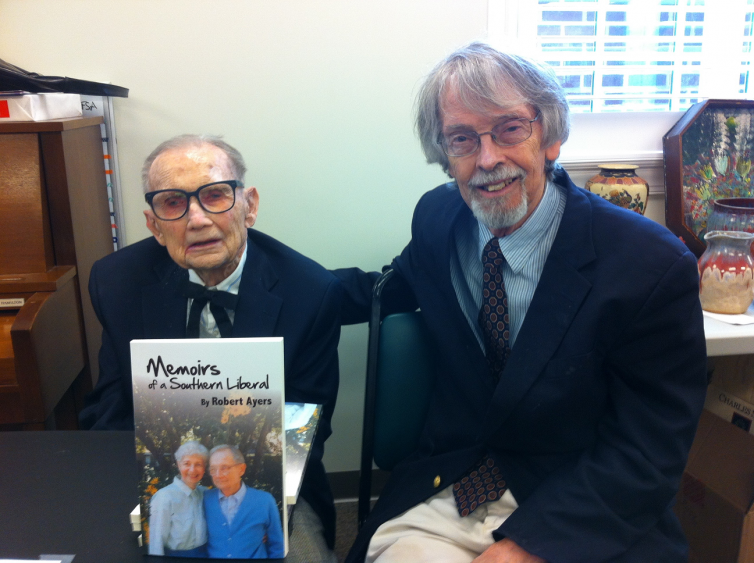 Along with his father, Dr. Ayers credits his three years at Yale with shaping his worldview, with turning his eyes sharply toward the pressing issues of his day. Without Yale, they would’ve been focused in other directions. Joining forces with other Southern liberals in New Haven, Dr. Ayers founded a group of which he is understandably proud, the Fellowship of Southern Churchmen.

Dedicated to ending sharecropping and mitigating the effects of racism, these radicals were not always greeted with enthusiasm. One of his fellow Southern churchmen was literally tarred and feathered and driven to the Arkansas state line. These setbacks only fueled their desire to change the world for the better and dole out hope, as they had been taught at YDS.

Dr. Ayers’ determination and steely progressive resolve has not wavered in the last 70 years. If anything, they have only grown stronger. He is still writing articles and sending them to Christian publications. (His most recent is scheduled to appear soon in Expository Times in Edinburgh, Scotland.)

Dr. Ayers writes, “In my nearly 100 years on this planet, a lot has changed and even more needs to change. Coming from a background as a small-town North Carolina mill country PK (preacher’s kid), I had no idea that many years later I’d play a part in the integrating of one of the south’s largest public universities, the University of Georgia. I had no inkling that I would pursue a life dedicated to helping everyone, especially those who our society has repeatedly tried to keep ‘in their place’—the workers, the minorities, the poor. I had no way of knowing just how many hypocrites and greedy, selfish people populated all our churches.”

“That is why I became a proud Southern liberal. … It’s also why the fundamentalists have tried to shut me up so many times. I’ve been the target of multiple fundamentalist inquisitions.”

While a student in Dr. Ayers’ class at the University of Georgia, in 1959, as a fifth generation Georgian, I was defining my life mission: “To try to make this a better world for the next generation as my ancestors had done.”  My family tree included founders of schools and libraries, including Dr. Thomas Bray, an English parson who founded schools and 39 libraries in the colonies in 1696 and initiated the idea of establishing a colony in America to relieve the plights of debtors prisons—Georgia! After serving on ministerial staffs of churches in Georgia, Connecticut, and Maryland, and after an M.Ed. at Johns Hopkins, I studied psychology at Oxford and arts administration at Harvard, to prepare myself for unconventional ministries I would create.

I returned to Georgia and founded the Georgia Fine Arts Academy in 1980 to encourage emerging artists, and I authored Defining Art: Messages from God. In 2006, I co-founded Bilbo Books Publishing with Bowen Craig, who is editor, whom I’ve known since he was 12 when he wrote his first book. Our goal is to enable authors to write memoirs, children’s books, books of poetry, and novels.

We focus on memoirs to meet the needs of older people, working with them while they write, and we publish these memoirs as a way of affirming how fulfilling their lives have been, leaving a written record behind to inspire their children, grandchildren, and future generations. I have thought that my classmates at YDS should write their memoirs, preserving their ministries and life work for future generations.

Little did I realize when a student in the religion class Dr. Ayers taught at the University of Georgia, that I would be publishing his memoirS—58 years later!

William E. Bray is a founder and president of Bilbo Books Publishing and the Georgia Fine Arts Academy. He previously taught at Endicott College and the University of Baltimore, where he founded the Film Department. He is the author of Defining Art: Messages from God and Your Spiritual Lineage: Researching the Genealogy of Your Soul.