“Who was the professor in the room?” 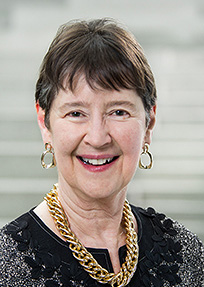 Adela Yarbro Collins knew from the D.Min. student’s puzzled expression that he was asking himself precisely that when he stumbled into her faculty office—Collins was a young professor at McCormick Theological Seminary at the time—and found her in conversation with a female student. It wasn’t just the youth of the pair that confused the man. It was the fact that both were women, which was rarely the case with biblical studies professors in those days.

There is no doubting Adela Collins’ professorial stature now—or the impact she has had on her field and in opening New Testament studies to more women. As Collins enters retirement after 15 years on the faculty of Yale Divinity School, she can reflect with satisfaction on what she has accomplished as a teacher, mentor, scholar, and author, and as a pioneer who overcame numerous obstacles to shed important scholarly light on the Bible, while helping others join the effort.

“When I started teaching at McCormick, I was the only female professor in an academic subject,” recalls Collins, Buckingham Professor of New Testament Criticism and Interpretation at YDS. “I was also the only Catholic. There weren’t many women students, either, when I started. By the time I left roughly half were women.”

Collins has also helped open doors to women at the other institutions on whose faculties she has served. Those include Notre Dame, the University of Chicago Divinity School, and, since 2000, YDS, where she became the first female tenured professor in New Testament studies—and where she now finds women professors and students succeeding across the curriculum.

“Adela has helped to pave the way for younger female scholars like myself in a field that continues to be dominated by men,” says Michal Beth Dinkler, Assistant Professor of New Testament at YDS. “I know many women who were Adela’s doctoral students and/or her master’s students who went on to pursue New Testament doctoral work, all of whom speak of her in the most glowing of terms.”

Dinkler, who team-taught New Testament Interpretation with Collins this semester, calls her senior colleague “a pioneer in a localized sense, as the first tenured woman NT scholar at YDS, and in a globalized sense, as one whose encyclopedic knowledge and interdisciplinary bridge-building are recognized — indeed, celebrated — around the world.” Dinkler adds: “Both personally and professionally, Adela stands as a model whom I hope to emulate in the years to come.”

Although Collins points out she has never been “political,” she clearly relishes the progress women have made in New Testament studies and the role she has played in accelerating it. Yet that is just part of her legacy. She also has the satisfaction of knowing she has spent her career doing exactly what she set out to do after discovering her calling as an undergraduate: working to understand the New Testament and historical Jesus.

Figuring out the historical Jesus

Collins initially enrolled in the University of Portland in her native Pacific Northwest, with the aim of becoming a medical doctor like her father. It did not take long for her to realize the humanities were her real love. She transferred to the more humanities-centered Pomona College and found herself studying iconic theologians as she pursued a growing interest in religious studies: people including Bultmann, Barth, and Tillich. “They were all talking about Jesus—and disagreeing about him,” Collins recalls. “I decided I was going to go into a Ph.D. program in New Testament and figure out this historical Jesus thing for myself.”

Completing her Ph.D. at Harvard, she went on to amass a stellar body of work, including more than a dozen books (including co-authored and edited volumes) and roughly 100 scholarly articles. She also contributed to her field by serving as president of the Society of New Testament Studies in 2010-2011—and, of course, by imparting what she had “figured out” about the historical Jesus to generations of students.

“I would hope to be remembered for my teaching,” Collins reflects, “for making accessible the biblical text in its original context. I have tried to help people understand that reading the Bible this way is important to understanding the text, and something important to incorporate into one’s theology and preaching. I hope I’ll be remembered as a mentor to students, especially those who want to go into academia. I hope I’ve been a good partner in dialogue for those working out their vocation.

“And, of course, I hope to be remembered for my books.”

That is a hope that seems certain to be fulfilled, given the scholarly acclaim for Collins as an author of important biblical scholarship. Among her books are Mark: A Commentary (Fortress 2007); Crisis and Catharsis: The Power of Apocalypse (Westminster, 1984); and The Combat Myth in the Book of Revelation (Harvard Dissertations in Religion 9; Missoula, MT: Scholars Press for the Harvard Theological Review; reprinted Wipf and Stock, 2001).

“Adela Collins has made major contributions to our understanding of apocalyptic literature, both Jewish and Christian,” says Harry Attridge, Sterling Professor of Divinity at YDS and dean of the school during most of Collins’ time at Yale. “Her commentary on the Gospel of Mark is a landmark in Markan scholarship.”

Attridge also hails his colleague for her success in mentoring some of the most distinguished scholars to come out of YDS and Yale over the past 15 years, including Candida Moss ’02 M.A.R. ’08 Ph.D., who is now a tenured professor at Notre Dame. Collins’ dedication has been noted by the Society of Biblical Literature Committee on the Status of Women in the Profession, which gave her its Mentoring Award in 2002.

Although Collins is retiring, she intends to remain active as a scholar. She is now working on a book titled “Paul Transformed: From Romans to Augustine,” which explores the evolution in the understanding of Paul and his writings over Christianity’s early history.

“Adela is not only an internationally acclaimed scholar and a committed pedagogue, she is a wonderful human being,” Sterling says. “She achieved the high respect of her peers for her scholarship at a time when it was not easy for a woman to do so. I have been privileged to serve with her on two faculties: first as her junior colleague and now as her dean. She was as gracious and helpful to me as a beginning professor as she has been to me as a dean.

“We will miss her immensely.”