Our society is facing a crisis rooted in the disconnection between journalism, public discourse, and rigorous scholarly thinking, according to Samuel Loncar ’12 M.A.R., ’19 Ph.D. “Fake news” is one way of summarizing the problem, he says, but the deeper question is, how do readers verify what’s true in today’s globalized world of fast, free-flowing information?

Answering that question is the driving force behind the Marginalia Review of Books, a digital magazine that publishes reviews, essays, and interviews at the intersection of science and scholarship, religion and culture, led by three YDS alums: Loncar, who serves as Publisher and Editor-in-Chief, Executive Editor Alexandra Barylski ’21 M.A.R., and Managing Editor Brad Holden ’11 M.Div., ’17 Ph.D. 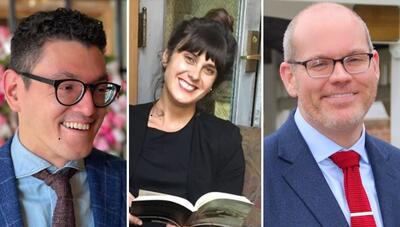 “We need to learn from experts, but experts aren’t trained to communicate like journalists, and journalists don’t have time to become scholars,” Loncar says.

On the other side of the crisis, scholarly communication is often inhibited by academia’s emphasis on hyper-specialization, a focus that prevents integration.

“Marginalia flips the logic of the university on its head,” Loncar says. “We help people self-consciously say, It’s great that you have this specialized insight. Please help us think through it together. What does it mean for people in other fields? Marginalia helps scholars reach a global classroom for free at any time.”

Marginalia creates a new space based on free, democratic public discourse, according to Barylski and Loncar, that curates writing that is as enjoyable to read as a journalistic story but represents the depth and rigor of the best of the academic tradition.

Biblical scholar Timothy Michael Law founded Marginalia in 2013 after he noticed that the Society of Biblical Literature’s main journal had stopped publishing reviews and wanted to start an online publication to fill the gap. After unforeseen personal circumstances, Law stepped away from the magazine, and it suffered a loss of readership. Loncar, who was working on his Ph.D.in Philosophy of Religion at Yale and had written for the magazine, had a conversation with an  editor at Marginalia about what the future might look like given the state of the magazine. Loncar, who works as a consultant, offered a strategic analysis that he hoped might be useful for their executive search. A few days later, Loncar received a call. The editor was convinced that Loncar should be Editor-in-Chief and was determined to make that the case.

“It was a complete surprise,” Loncar says. “But it made me realize I wanted to re-found the institution as something that built on its strengths in religion and history and incorporate top- level coverage of science, bringing science and the humanities together. Marginalia became a new bridge for some of my own ideas as a philosopher and scholar, which was to create a new way of connecting the university, the culture of journalism, the arts, and sources of meaning like religion into a single space.”

Barylski, a poet who spent many years teaching secondary-school literature and college writing, joined Marginalia in 2017 as a review writer. But she quickly realized that Marginalia offered an opportunity to apply her skills as an editor to a mission that aligned with her values about  education.

By the time that Loncar took the helm of the magazine in 2017, the readership had fallen below 30,000. Now, the magazine’s annual readership is more than 150,000 and growing. The magazine currently publishes six to eight pieces a month with a focus on book reviews, essays, and forums, which are collections of essays that explore recently published academic texts and other weighty subjects. Those include forums on the 500th anniversary of the Protestant Reformation, edited by YDS Professor Bruce Gordon, and more recently, Makoto Fujimura’s Art + Faith: A Theology of Making, Michael Fishbane’s Fragile Finitude: A Jewish Hermeneutical Theology, and SherAli Tareen’s Defending Muhammad in Modernity. Marginalia’s articles—all paywall-free and available online—have been translated into Chinese, Farsi, and Japanese, widely anthologized, and taught at universities around the world.

“The writing that we publish and curate is strongly connected to our mission and self-conscious identity as an online, free-to-access platform that provides knowledge from experts, written and edited for a wide readership,” Barylski says.

Three years ago, a consultant for the Templeton World Charity Foundation unexpectedly approached Marginalia. The foundation liked what Marginalia was doing and wondered what the magazine would do if given a grant. Fortunately, Loncar had thought about future projects that Marginalia might pursue to further its mission. After a half-hour conversation between Loncar, Holden, and the foundation’s president, Andrew Serazin, the foundation awarded Marginalia a grant.

Part of the Templeton grant funded a symposium at Oxford University this past summer, “The Meanings of Science in the Modern World.” The symposium, co-directed by Loncar and Peter Harrison, Director of the Institute for Advanced Studies in the Humanities at the University of Queensland, convened leading thinkers on science, including physicists, historians, and philosophers of science, to speak to each other and to the public about what science means. Marginalia will publish the participants’ papers in an edited collection online as well as video interviews and additional essays.

The practice of science, according to Loncar, has been a gift to the world, but many of the ways we have come to think about science arose from an ideology based on stereotypes that developed during the European Enlightenment. For the past half century, historians of science have revealed these stereotypes to be false, he says, and are recognizing, as this this Nature editorial has pointed out, that institutionalized science has historically excluded participation from people of color and marginalized groups and at times actively contributed to discrimination against them.

Including diverse voices in conversations about science and culture is at the heart of the magazine’s vision for the future. Marginalia recently became a 501(c)(3) organization and has big plans for the years ahead. The senior team is planning a new website and, as they raise funds, plans to offer printed collections of their forums. Many of the challenges society faces today—from addressing structural inequalities to acting against climate change—require agreement about fundamental questions of human value, according to Barylski and Loncar, but no one person can answer those questions alone.

“And I see all of it as part of the same activity, which is practicing this very messy attempt to become human, to facilitate the search for knowledge and wisdom, and to give everyone access to transformative insights offered by scientists, scholars and artists.” Loncar says. “Humanity is something I think we have to practice.”

Leah Silvieus ‘21 M.A.R. is a poet and writer working at the intersection of religion and literature. She is author of the poetry collection Arabilis (Sundress Publications) and is the co-editor with Lee Herrick of the anthology The World I Leave You: Asian American Poets on Faith and Spirit (Orison Books). Silvieus is an associate editor of Marginalia.