Editor’s Note: During the year of our Bicentennial, YDS hopes to publish alumni/ae stories from their time at YDS, such as this piece by Robert Tiller. If you would like to participate, please send your idea to the Communications Office via this form.

Sixty years ago, in September 1962, I landed at Yale Divinity School, a skinny kid of 21, eager to dive into every aspect of seminary life. Nearly all first-year students were signing up for field work, i.e., placement in a part-time position in a nearby Protestant parish or another church-related setting, such as campus ministry or YMCA. Field work almost always included supervision by an ordained minister who maintained a professional relationship with YDS. 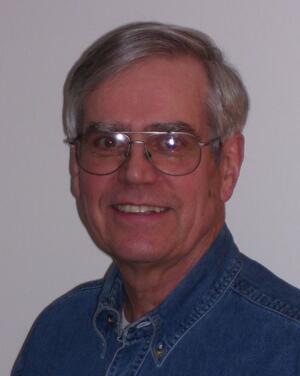 Since field work was understood as a central component of the educational experience, I promptly decided to enter the system by scouring the bulletin boards and signing up for interviews. However, early in the process I was contacted by someone seeking a student for a new and unusual placement: working with a “storefront” church in the city’s Fair Haven section.

Nevertheless, the Disciples House embarked on building a supportive relationship between the two congregations, including recruiting a field work student to support the pastor and congregation (and paying the appropriate stipend). Though I was not part of the Disciples’ tradition, they thought – apparently drawing on components of my YDS application – that I would be a good candidate. I was intrigued and excited about this non-traditional placement, and, after the briefest period of deliberation, I eagerly accepted.

Thomas Chapel had been founded in 1948 by Elder Luther Thomas, who was still the pastor. He was genuinely pleased to welcome me to the church and give me some pastoral responsibilities. He was, to use a term coined long ago, a “bi-vocational” pastor, holding a full-time job on weekdays and devoting his weekends to the church. He had never attended an accredited seminary. All of the people were African American (or “Negro” in the parlance of the time). While they could not overlook the dominating presence of Yale University in their city, most of them were unaware that the university included a divinity school, so my appearance on the scene sometimes required an explanation.

The church did not meet in an actual storefront, but in an old one-story building that had probably been built as a warehouse. It had second-hand pews and a small electric organ, but no sound system. It had heat in the winter but no air conditioning in warmer months. There was no church office or pastor’s office. Elder Thomas mimeographed the Sunday bulletins in his small apartment. 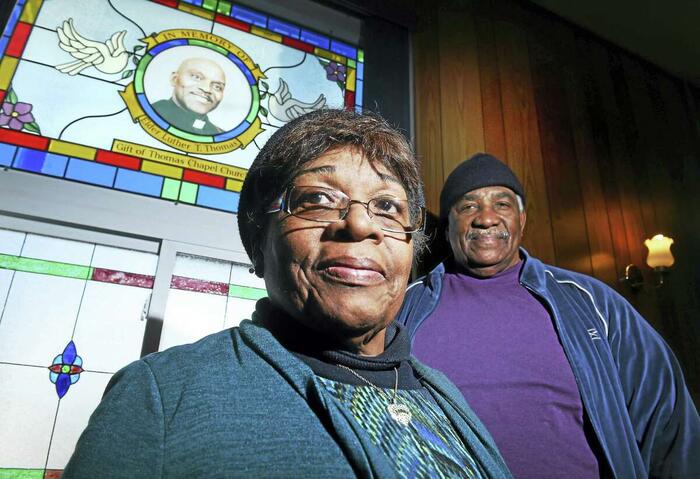 The congregation was not large but was substantial enough that two services were held each Sunday, with Elder Thomas preaching at both. The first service usually had a couple of dozen people in attendance, while the second had between 50 and 100. The second service was understood by everyone as the more important one.

Early in my tenure I was asked to lead a prayer in the first service, and later I did the same in the second service. After a few months Elder Thomas invited me to preach at the first service, which I did with trepidation, and not merely because I had not yet taken a preaching course at YDS. Worship at Thomas Chapel was squarely in the ecstatic tradition, and sermons were always given in a call-and-response style. My first preaching attempt was memorable only for its stiffness, and over the course of several attempts I got only slightly better. Whether I was praying, preaching, or reading Scripture, my name appeared each week in the mimeographed order of service as “Minister B. [for Bob] Tiller.”

Since I was the first YDS student at Thomas Chapel, there was neither a job description nor a precedent for me to follow, but Elder Thomas was thoughtful about getting me engaged with several components of church life. In addition to Sunday worship, he asked me to work with the children’s Sunday School, to meet with the men’s group, and to make pastoral visits in people’s homes. I even assisted with a funeral. 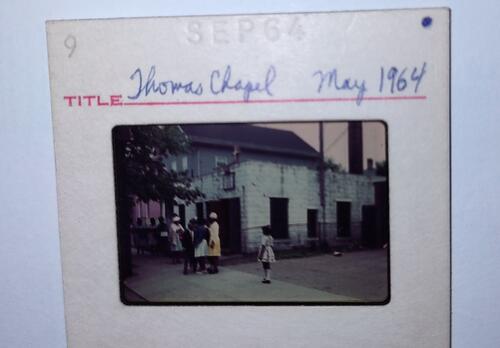 Thomas Chapel shared the Lord’s Supper only in an evening service once a month, a startingly sharp difference from the practice of the more well-known Disciples of Christ denomination. Once a quarter those evening services included something that I had never previously experienced: foot washing. Overcoming some initial hesitancy, I participated several times in that component of communal worship, and it became truly sacred, touching me deep in my core. I carry a strong, positive remembrance of those foot-washings to this day, especially the poignancy I felt when one church member passed away just a few weeks after I washed his feet.

Thomas Chapel was entirely African-American – except me. But my whiteness never prevented the church members from embracing me and trusting me.

At the outset I was keenly aware that I was worshipping each Sunday – not to mention providing leadership – in an all-Black setting, a totally new experience for me. But after a few weeks I no longer saw the people as members of a different race; they were the people of my church who loved God and were growing to love me. It was a stunning epiphany when I realized one day that I was seeing the people of Thomas Chapel without using the lens of our racial differences.

Many of my YDS peers were intrigued by my field work, and a few were curious enough to come for Sunday worship or a Sunday evening communion. The woman I was dating asked to come; when she became my wife, she said that my work at Thomas Chapel was one of the things that convinced her I was a “keeper”!

I learned so much and enjoyed my experience so fully during that year that I asked the Disciples House leaders if I could continue the placement for a second year, and they said yes. It started as a continuation of the first year, until a unique and shocking event occurred that fall.

Elder Thomas never took a Sunday off, and I mean never. During my second year, he confided to me that he had not missed a single Sunday since the church was founded 15 years earlier, and he longed for a weekend to visit family down south. He went on to say that he had decided to make a trip soon, placing the entire set of Sunday events in my hands. He had never before asked me to preach at the second service, so this was huge, an indication of his immense trust and confidence in me, and I vowed that I would not mess it up. So, he chose his weekend, and I began preparing to lead two services and do whatever else was needed. He even gave me a key to his apartment so that I could go there on Saturday and mimeograph the worship bulletin. 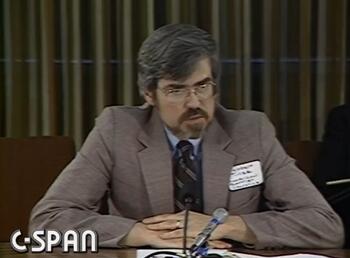 On Friday, November 22, 1963, Elder Thomas left town – and the President of the United States was assassinated that afternoon. The entire nation was convulsed and reeling, with African-American communities feeling especially hard hit. Suddenly my modest challenge of filling Elder Thomas’ shoes for one Sunday became enormously daunting. What could I do, what could I say, in the face of this unspeakable tragedy? My planned sermon on Thanksgiving suddenly seemed hollow. I labored long and hard that Saturday, keeping one eye on the television newscasts, trying to create appropriate and authentic worship plans for the two Sunday services. Truthfully, I have no memory of what I actually said and did that Sunday. I know that I strove to be the best pastor I could be, and I know that all of us were caught up in grief and shock.

After two years at Thomas Chapel, it was time for me to move on, not only in my field work but in other ways. Newly married, my wife and I took an intern year away from YDS, followed by two more years in New Haven. Upon our return we did not re-establish a relationship with Elder Thomas or Thomas Chapel, which was appropriate, but we did reach out to two families with whom I had been especially close, and those small contacts were gratifying.

As I reflect on that marvelous experience six decades ago, these thoughts stand out. At first blush some of them may seem to contradict others, but they really don’t.

I can still recall the names and see the faces of many Thomas Chapel parishioners, and I am deeply thankful for each of them, and especially for Elder Luther Thomas.

Postscript: Thomas Chapel Church of Christ Disciples of Christ is still a thriving congregation, no longer in a tiny building, but now in a much more substantial structure on White Street in New Haven.

Rev. Robert Tiller ‘66 B.D., ‘67 M.U.S. led the public policy advocacy work of several religious bodies, including American Baptist Churches USA, Bread for the World, and the Religious Coalition for Reproductive Choice. He also served as pastor of Mariners’ Temple Baptist Church in New York City and as a staff member in the New York City Mayor’s Office. He and his wife, Elaine Tiller ‘67 B.D. 1967, are now retired and living in Silver Spring, MD.