One day in June 2015, A. Kazimir Brown ’19 M.Div. went to work as usual as a budget analyst for the Federal Emergency Management Agency. She stopped by the break room, where a television blared the news. Brown seldom watched TV, but something made her look up at the screen.

“Time felt like it froze,” she says of that day, June 17, when a young white man walked into Charleston’s Mother Emmanuel African Methodist Episcopal Church and shot and killed nine Black church members during a Bible study. “I kept reading the (news) scroll, trying to unread it, trying to convince myself that it wasn’t happening.” 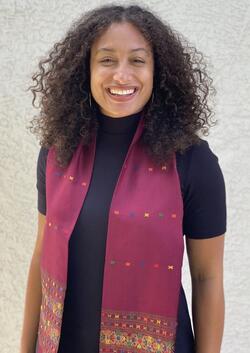 But, of course, it was. And even though Brown, then in her mid-twenties, had never been to the storied Mother Emmanuel, the events there changed her life in a way she never expected.

“That was when I realized, when I discovered, and when I accepted my call to ministry,” she says—a call that now finds her in Washington, D.C., serving as Deputy Director of Religious Affairs of the Mass Moral Assembly set for June 18.

Since childhood, Brown knew she wanted to work in social justice. Even as a kid growing up in San Francisco, she fantasized about buying this empty building or that run-down house and turning it into a home or service center for the poor she saw sleeping on the city’s streets and asking for food.

At Santa Clara University, a Jesuit school, she studied political science, sociology, and Spanish. She decided to focus on public policy and budget as a means to create change and entered the Goldman School of Public Policy at the University of California, Berkeley. After getting her master’s degree in 2013, she spent a year as a budget analyst for San Francisco’s City Administrators Office before heading to Washington D.C. to work for the Obama Administration, handling budgets for FEMA’s Office of Response and Recovery.

In Washington, she found a spiritual home at Metropolitan AME Church — the same denomination as both her childhood church and Mother Emmanuel—and, while everyone’s feelings were still raw after the murders, she went to her pastor, Rev. William H. Lamar.

“Before I could even get my words out, I just started weeping,” Brown remembers. “I said, ‘I think I’m supposed to talk to you about ministry.’” He replied, ”We’ve been waiting for you to say that.”

Lamar remembers the encounter as well. Brown’s talent for ministry, he says, revealed itself to church members during weeknight Bible studies.

“When she began to ask questions, what I heard was a rich, deep spiritual life married to fierce intellect,” he says. “And that not only thrilled me, but it thrilled other people in the congregation because I saw her youth and her wrestling with questions as evidence that she would be used by the Divine and by our ancestors to do work necessary in our moment.”

Friends and family also thought ministry made sense for Brown. After applying to six theology schools, she landed at Yale Divinity School in the fall of 2016.

“I really wanted to go to a school that was going to challenge me academically and give me the theological framework that I was looking for,” Brown says. “But I also wanted it to be a place where I could have the theological rigor and not lose the spiritual, devotional, and worship side of faith. And when I got there, I just felt so welcomed.” 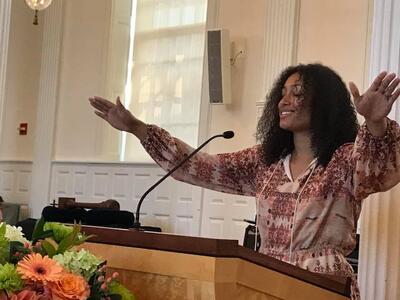 And she received an unusual confirmation of her decision to enter ministry. At a young age Brown lost both grandmothers within a month of each other. As a way to honor them and mark a time in her life where she had to learn a new way of life without the two women who meant the world to her she decided to go by a new name, Kazimir. She met a fellow student whose name is Casimir, and he asked her if she knew the name’s meaning. She didn’t know the full meaning, so he told her—it can mean “preacher or bringer of peace.”

“I just remember thinking, ‘Wow. That is life speaking over me and what I was doing,’” Brown says.

In her first semester, Brown encountered the Rev. Dr. William Barber, the legendary social justice and moral movements leader many consider one of the most prophetic voices in Christianity today. After hearing Barber speak at YDS about the Poor People’s Campaign, Brown was absolutely energized.

“I’m hearing this blending of faith and policy, and it’s coming from a moral narrative,” she says. “And I remember saying, ‘I’m supposed to do this. I am supposed to do THIS.’”

In summer 2017, Brown interned with the Repairers of the Breach, Dr. Barber’s umbrella organization, and applied for a fulltime job there when she finished ay YDS in 2019. In early 2020—just as Covid-19 was starting to make headlines—Brown became the National Director of Religious Affairs at Repairers of the Breach. 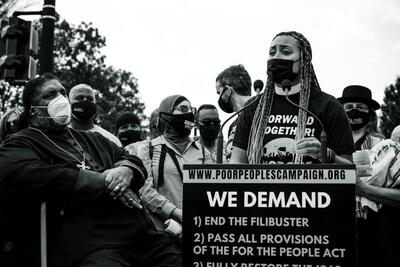 For the past two and a half years, Brown has split her time between San Francisco and Washington D.C., where she is playing a lead organizing role for the Poor People’s and Low-Wage Workers’ Assembly and Moral March on Washington and to the Polls. It is, she says, the dream job she always hoped for, combining policy, activism, social justice, faith, theology, and devotion.

“We are committed to providing a platform that lifts up the voices of those who are often shut off to the side,” she says of the June 18 event. “We are not having people speak on other people’s behalf but want impacted leaders to share their own testimonies about what it’s like living in this country with these systemic injustices.”

To Lamar, Brown and her job are a perfect and prophetic match. “I think what has happened is that her rich intellectual life has been nourished by an extraordinary exposure to the blessings and bedevilments of theological inquiry,” he says. “I think what I have seen is that Kazimir is an even more skilled God wrestler than she was before, and by that I mean she is engaged by the Divine and she engages back. And that shows up in the work that she is doing in the world. She is part of a vision of a nation that has committed rhetorically to democracy but has never committed to it politically and economically.”