The art of coffee grounds, caution tape, and Marquand worship

At Marquand Chapel, worshippers arriving for Friday Eucharist are stopped by a barrier of bright yellow caution tape strung gate-like between the chapel’s entrance pillars. The police-style tape makes Marquand look like the scene of a crime or dreadful accident, or maybe like something structural is about to give way. Amid this hint of mayhem, the presence of greeters guiding visitors into the sanctuary only adds to the disconnect. 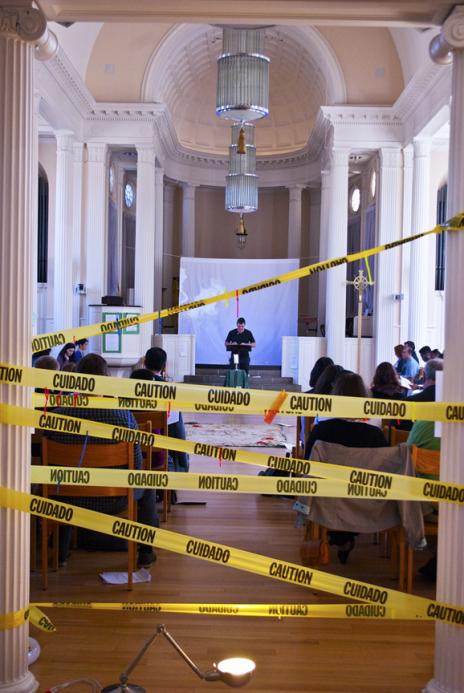 Inside, the chapel has been transformed into a kind of makeshift playroom. In the center, where the altar typically stands, a large tarp has been spread and covered with two inches of fine sand. The sandbox ambiance is heightened by pictures and comments drawn in the sand with tools laid out for that purpose. Clothes-lines strung on both sides of the room in the back are pegged with newspaper clippings, drawings, and notes. At a podium, blank paper and markers invite visitors to offer a response to a posted Gospel text. Across the apse, a large screen displays a video loop of a silhouetted figure exhaling into a cold night, billows and wisps of breath tumbling from his mouth.

This extravagant display from earlier this semester was the work of Mark Pierson, a Baptist pastor from New Zealand. For four days in early October, Pierson was Marquand’s “ritual-artist-in-residence,” leading worship, conducting workshops, and meeting with students. He had been invited to the Divinity School by Maggi Dawn, Dean of Chapel at Marquand and Associate Professor of Theology and Literature.

Since her arrival at YDS in 2011, Dawn has assembled an impressive record of incorporating the arts into the daily liturgy at chapel. She is uniquely equipped for this role. In addition to holding a Ph.D. in theology from Cambridge and being ordained in the Anglican Church, Dawn’s first career was as a professional singer-songwriter in England, where she performed widely and recorded six albums. Under her leadership, Marquand has become something of an atelier of arts in worship. Chapel services have featured an oil painter working at his easel, a performance-artist video on racial profiling, and a tap dancer giving a sermon with his feet.

This past February, Dawn hosted Ted Lyddon Hatten, an artist, theologian, and educator. Hatten creates what he terms “visual homiletics,” works of art as prophetic preaching. He occupied Marquand Chapel with an art installation made from an aggregate of myrrh, volcanic sand, and the dried coffee grounds from YDS’s daily coffee hour. A thin, granular stream of this mixture trailed down the chancel steps, split into two branches, and grew in size as it spread to the center of the chapel, where it circled into a large, plaited, Celtic-style knot. The artwork became the focal point of a meditation on Isaiah 6:1-8 and “how the presence of God destabilizes our received understanding of our situation,” as Dawn later wrote.

Pierson, Hatten, and Dawn are all part of an international affiliation of self-described “ritual artists,” worship leaders who use the arts to infuse new life into the liturgy. 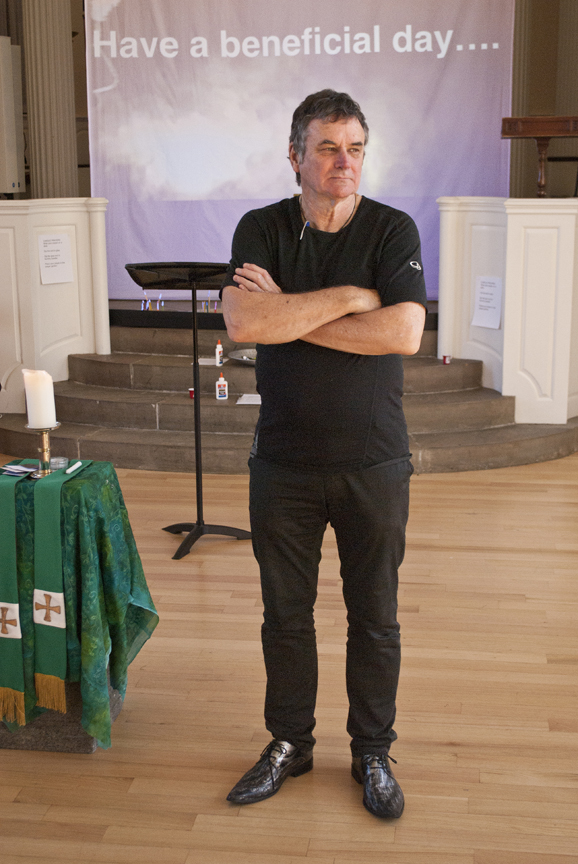 “I never think of myself as an Anglican priest,” said Dawn. “I think of myself as a ritual artist. Always have. I don’t see a great difference between them, in a way. Among the group of ritual artists I meet with, I would say all of us function like artists who’ve been ordained, because that’s what you need to do to be able to take it to church. We all think and operate … [as] artists first. If you are an artist, that’s just what you do, how you think, how you operate. We’re not like priests who are trained to do art. We’re artists who somehow got sucked into church.”

For ritual artists, a worship service is not a formulary ritual to be planned and led, but an event that, borrowing from the language of art galleries, is “curated.” Pierson defined this concept of a “worship curator” in his 2010 book, The Art of Curating Worship: Reshaping the Role of Worship Leader. Pierson’s October residency was a primer on his theory and practice.

“The worship curator,” he explained, “sees the worship event as more than what happens from the pulpit. It’s much broader than that. Just like a gallery curator, it’s not just about the art. It’s the arrangement of the art, the juxtaposition, the light levels, all those kind of things.”

“I see worship as an art form,” he said. “I decided I would try to build a new language around worship … to encourage people, not necessarily to do things differently, but to see things differently. To see what they are doing.”

“Seeing things differently” is the essence of curated worship, which seeks to shake the worshipper awake from the drowsy routine of an overly familiar liturgy. Where the conventional notion of the “worship leader” suggests a top-down relationship from pulpit to congregation, curated worship is conceived to open up space for participants to make the church experience their own.

“By designing or curating,” said Dawn, “you set the parameters of the worship experience and hope that some of it will communicate what’s in your head. But you also know and embrace the fact that the people might weave something into it that you hadn’t thought of.”

Pierson amplified the point. “If you just stand at the front, you choose the songs, you tell the people what they mean before you sing them, you tightly pray a little prayer that connects it together, and you preach a very doctrinally focused sermon, then you’re really saying, ‘I’m controlling the narrative.’ But if you curate and deliberately put an open space into what’s happening, then you … invite people to bring their reading. We’re anticipating the fact that people who come to the worship space will put something into it, not just take something out. They will invest meaning.”

This “open-endedness,” Pierson said, “is a major characteristic of curating and designing worship.” Its chief features are disruption and surprise, the energies of play, exploration, and ambiguity that marked Pierson’s Marquand presence. 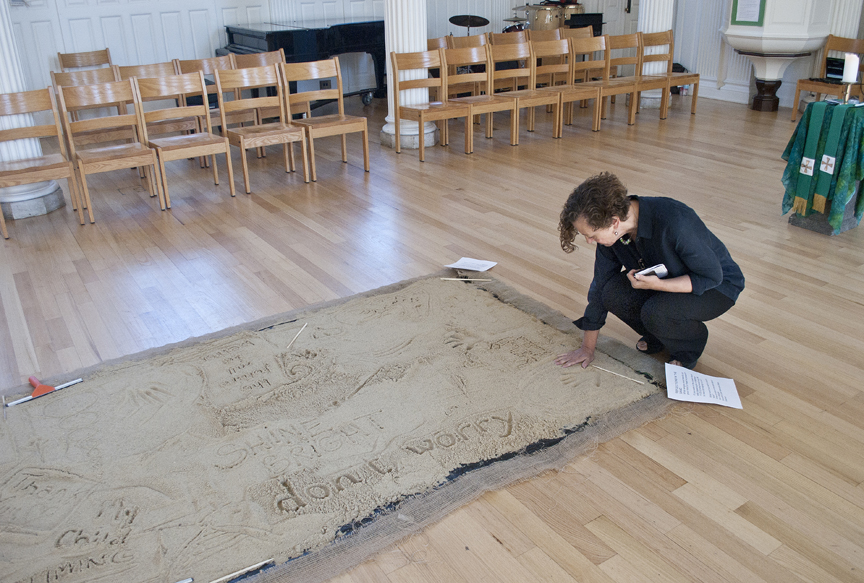 His three days at chapel were curated as a single, multi-part service that he titled, “The Unforced Rhythms of Grace.” The title came from The Message Bible translation of Matthew 11:20-30, which Pierson read in each service and posted in the chapel for comment. Returning again and again to the same text, he summoned new and nuanced meanings. Over the course of his residency, Pierson encouraged worshippers to find their own “unforced rhythms” by having them pore over old newspapers for inspirational quotes, watch a video excerpt about sacred breath, and bid each other “have a beneficial [rather than a good] day.” The numerous activities that lent the chapel a playground air were conceived by Pierson as “ambient stations,” evoking the series of 14 ritual Stations of the Cross arranged in numerical order in Roman Catholic churches.

“Those are linear stations,” he observed. “You don’t go 7, 3, 1, 14.” By reinterpreting the idea of devotional stations as non-linear, Pierson hoped to provide “a new language to encourage new ways [to] engage with God.”

Worshippers moving among the stations experience a sense of “deep silence,” Pierson said, as each person comes to terms with his or her private meaning of the activities while also interacting collectively. The experience, he observed, offers participants “the potential for liminal moments of individual and corporate transformational engagement with the Trinitarian community of God.”

“Everything in the [traditional] worship event supports the preacher, because the preaching is the most important thing,” he said. “I think that’s a misunderstanding. There are different learning styles, different intelligences, a lot of things going on. For some people the sermon will be their main thing, but not necessarily for most people most of the time.” While Pierson recognizes the value of historical and theological context—the exegetical “facts,” as he describes them—he is adamant that such content, “isn’t going to change the hearts of most people and the way that they live.”

The goal of formation, he said, is to “have people become followers of Jesus, not just thinkers. You need much more than facts. Statistics indicate that issues in the world—marriage, divorce, alcohol, pornography, abuse, whatever—are really no different in the Church community than they are outside the Church. I’m sure Jesus didn’t intend it to be that way. Changing people’s thinking alone doesn’t change their actual behavior. It needs to be about heart and passion and desire for the change to work.”

Such “heart” and “desire” grow from worshippers’ experience of participation. While all liturgy involves some degree of performance, for ritual artists and worship curators, “performance” is how they raise the stakes on the encounter with the holy.

In such a context, participation “is a fraught word,” Dawn cautioned. Participation, she notes, means more than everyone joining into an activity. “If you go to a church where there is a beautiful choral anthem, you participate by listening.  You participate by being drawn into the worship.” Even when the singing is performed by the choir, “it’s not that you’re not participating.”

Participation is a form of attention. “With this kind of ritual art, you are drawn in,” Dawn said of the artists who join her at Marquand. “You’re supposed to feel that you’ve crossed an invisible line.”

Timothy Cahill ‘16 M.A.R. is a writer specializing in religion and the arts.