Beyond Coexistence: Atheists, People of Faith

“Ever wondered if the rumors were true—that atheists walk among us?” asked an anonymous open letter circulated to the YDS community in late November 2012, “Want to meet a real live atheist? Here’s your chance.” 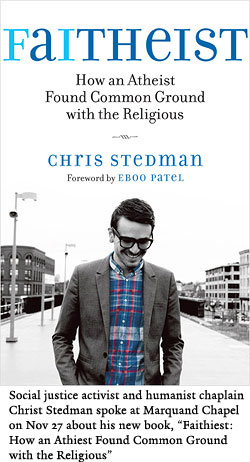 The letter encouraged members of the YDS community to attend a lecture by Chris Stedman, an interfaith social justice advocate—and avowed atheist—who spoke at Marquand Chapel on November 27 about his journey to atheism, his work as Assistant Humanist Chaplain at Harvard, and his new book, Faithiest: How an Atheist Found Common Ground With the Religious (Beacon, 2012).

Stedman’s address is part of an ongoing interfaith discussion at YDS that is growing to include atheist, agnostic, and multi-religious voices. Amidst a variety of Christian denominations, the YDS community now includes members from Buddhist, Hindu, Muslim, and Jewish traditions as well people who identify with multiple traditions…or no faith tradition at all.

Stedman began his talk by recalling his own faith journey from “born again Christianity” to atheism, a journey profoundly influenced by the hostile homophobia he encountered in Christian communities. Yet, as an atheist, Stedman found himself equally discouraged by the intense hostility toward religion popularized by folks like Richard Dawkins, Sam Harris, Christopher Hitchens, and others from the “New Atheist” movement.

Instead, Stedman earnestly appeals to both atheists and people of faith to find common ground and work together to contribute to a better world. “I want to work to build a world where oppression and suffering can be eradicated,” writes Stedman in Faitheist, “I realize this is already a slightly demanding task, and I believe that it is rendered impossible if I endeavor to do it alone or only alongside like-minded peers.”

Working together is also the mission of Open Party, new student group at YDS resurrected in the fall 2011 semester. As a group for atheist, agnostic, non-religious, multi-religious, and non-traditional students at YDS, Open Party is dedicated to improving interfaith—and inter-belief—conversations as well as providing a space for fellowship with other non-Christians, much like the Baptist, Catholic, or Lutheran student groups. For example, after some students voiced concerns about non-Christians participating in Marquand Chapel, Open Party began a discussion about how and when non-Christian participation is appropriate in a Christian service.

Esther Boyd ’13 M.A.R., a co-leader of Open Party, is glad to be at YDS. She describes her experience as overwhelmingly welcoming and now says she feels “better equipped to talk to people of other traditions.” Also, she says, Open Party and its members “instill an awareness of non-Christians on campus that benefit the all students study and ministry.” As one of the coordinators for the 2012 “Before the Fall” orientation for new students, she was able to ensure that both students with traditional and nontraditional beliefs felt equally welcome in the YDS community.

Recognizing that people of faith often view atheists and agnostics with suspicion and mistrust, Stedman challenged the YDS community to go out of their way to understand those who are different from themselves—not just coexist with them. This process, Stedman explains, “is as simple as seeking to understand the diversity of people who are here with us and working together to advance equality and justice for all people.” And by hosting events such as Chris Stedman’s talk and expanding interfaith discussions, that is precisely what Open Party aims to accomplish at YDS.