“Protest,” said the activist and movement leader who is widely derided by critics as a professional protester, “is as American as America itself.”

That was but one of many memorable quotes flying on Twitter and in audience members’ notes when DeRay McKesson, the highest profile leader of the #BlackLivesMatter movement, spoke at YDS on October 2. 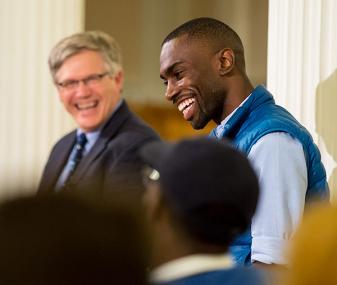 In addition to two days of direct interactions with students enrolled in the one-credit course, McKesson engaged in an energetic public conversation in Marquand Chapel. After being interviewed by program director William Goettler, he fielded questions being tweeted (and scribbled on notecards) by the overflow audience.

Among the other tweetable quips from McKesson—which were being live-tweeted, naturally, by many in the audience—were these:

Wearing his trademark blue down vest and posing for numerous selfies with students and other event attendees, an animated McKesson clearly relished his interaction with YDS. The day after the completion of the course, the Bowdoin College graduate tweeted to his 232,000 followers, “I’m still processing some of the powerful conversations we had in the @YaleDivSchool course I taught over the past two days.” 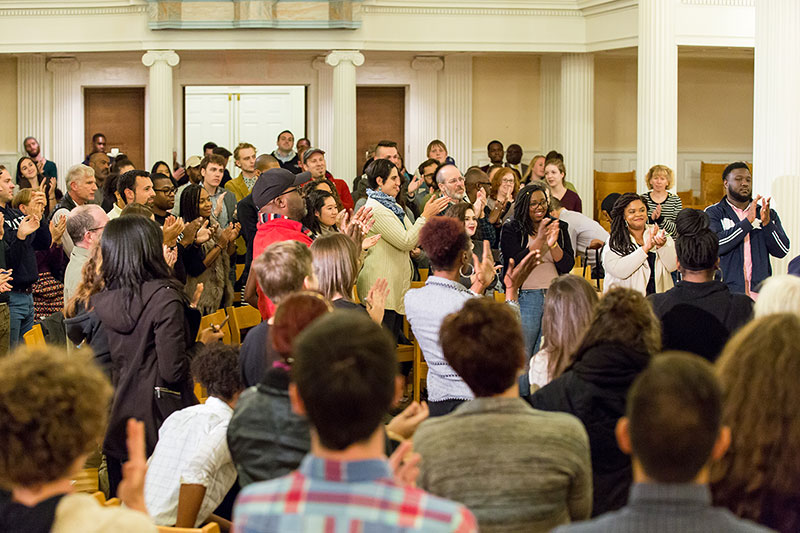 Helping spur those conversations were the readings enrollees were required to do in advance of the class. Among the assigned works were Between the World and Me by Ta-Nehisi Coates (Spiegel & Grau, 2015) and Silent Covenants: Brown v. Board of Education and the Unfilled Hopes for Racial Reform by Derrick Bell (Oxford, 2005). To complete the course, students are writing papers reflecting on the readings and interactions with McKesson.

“DeRay McKesson prompted deeply thoughtful reflection on the work of social change and leadership in ministry,” said Associate Dean Goettler, the instructor of record for the course.

From the time of the August announcement of the new program and McKesson’s role as the first guest-lecturer, YDS has heard wildly positive enthusiasm from its students and movement supporters from around the country—as well as complaints from those opposed to the #blacklivesmatter movement and the idea of its leader speaking at venerable Yale. There were no disruptions over the course of the weekend.