Over the past 10 years, Janet Ruffing has developed the YDS curriculum in spirituality, culminating a long career in spiritual development and teaching. After the spring semester, she will become Professor of the Practice of Spirituality and Ministerial Leadership, Emerita.

Dr. Ruffing’s own spiritual life began early. “I had deep experiences of God from the time I was five,” she says. “My mother taught me how to make a ‘spiritual communion’ when the rest of my family processed to receive the Eucharist, and I felt an intense experience of the presence of Jesus within me.” 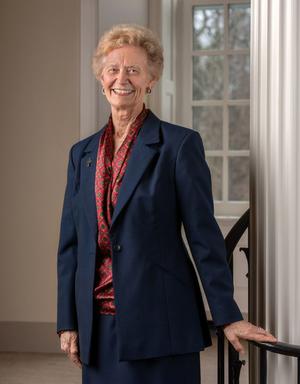 Young Janet’s spirit was nurtured in the Catholic faith but with a strong emphasis on ecumenism, which came first from her family and later through her experiences of the academy. Ruffing’s father had attended services in multiple Christian traditions growing up, and he taught his children to respect how others worshipped.

Ruffing’s intellectual and spiritual development was most influenced by the Mercy sisters she met during her first year of high school. “The Sisters of Mercy were so progressive educationally that it was the first time I was actually challenged in an academic environment,” she remembers. Moreover, Ruffing participated in the sodality. “The contemplative depth of the sisters I knew was extraordinary,” she says. At just 18, she decided to enter the convent.

Ruffing also knew she wanted to teach. While still in high school in Anaheim, she told her mother, a public elementary school teacher, that she hoped to teach literature or philosophy at the college level. But her religious order did not have a college west of Omaha, so Ruffing was slated to become a high school teacher.

Then, “by accident,” Ruffing found the intellectual calling that was to drive her work through a long academic career. She had completed her undergraduate degree at Russell College and was taking a few graduate-level courses for her California teaching credential and hoping to make a 30-day Ignatian retreat. Sister Juliana, her college English teacher, who oversaw retreats for the Mercy sisters, told her about a graduate program at the University of San Francisco. The summer program offered a master’s degree in applied spirituality, which began with a directed 30-day Ignatian retreat.

The lectures that preceded the retreat were given by Jesuits from all over the world who were experts in the Spiritual Exercises. Ruffing herself was directed by the Jesuit theologian Michael Buckley, renowned for his work in systematic theology, and who also served as rector of the Jesuit School of Theology at Berkeley. “During his lectures, I fell in love with Michael Buckley’s mind,” Ruffing says. 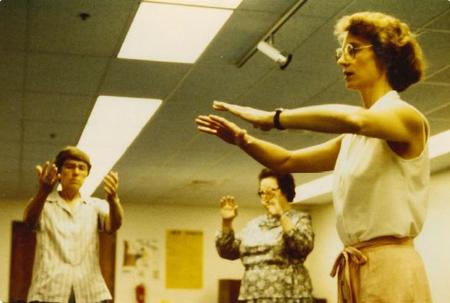 The academic program took place over the three summers that followed. Two featured coursework taught by “superb” professors, some of them from the Gregorian University in Rome. The final summer required students to apply their learning; Ruffing began offering spiritual direction as well as supervised pastoral care at St. Mary’s Hospital. “The whole experience reawakened my intellectual life,” Ruffing says.

After further graduate theological study at the Institute for Spirituality and Worship at the Jesuit School of Theology and six years of doctoral work at the Graduate Theological Union,  Ruffing had a serendipitous—and course-altering—conversation.

She was working on a formation program for the Oakland Diocese at the time and developing a summer internship program at Mercy Center in Burlingame, wondering whether to stay the course or find a university teaching post, when she received timely advice. A Jesuit spiritual director and former theological school dean told Janet she could do any number of things with her Ph.D., but if she wanted a university position, she would have to find one within three years. “Then, if I didn’t like it, I could do something else. The reaction I had, I call the ‘sword of discernment’,” Ruffing remembers. “I understood I needed to actively seek a university position upon graduation.” She then wrote the necessary submission for a booklet advertising recent graduates from the GTU that was sent to deans of schools of religion or theology.

One day that fall, she had a call from Vincent Novak, SJ, the dean of the Graduate School of Religion and Religious Education at Fordham University. The school had an open position in spirituality, with a specific emphasis in spiritual direction. He had done his homework: He knew that Ruffing was at work on a dissertation on narrative aspects of spiritual direction, and after a campus visit with interviews, he was confident that she would be a good fit. When he offered Ruffing the position in January, she had written only the first chapter of her dissertation. She completed it by May and had a book contract by July. And by that fall, she had moved to New York. 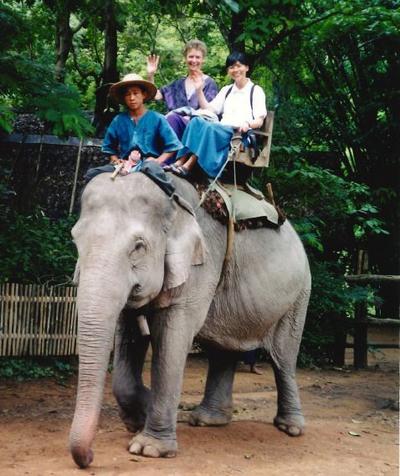 Over more than 23 years at the university, Ruffing built Fordham’s concentration in spirituality and spiritual direction, developing all the spirituality courses. She advanced the curriculum in spiritual direction by integrating offerings from the “very strong” pastoral care program, focusing on such topics as helping skills and special issues in counseling. The resulting program became very popular in the graduate school.

It might have appeared that Janet Ruffing was set for life at Fordham. But then, another serendipitous conversation. It was 10 years ago when Harry Attridge, then the dean of YDS, called her, saying the school would like her to visit in order to consult on a nascent program in spirituality. She was not sure she could afford the time commitment, but the interview fell on a day when she was awaiting page proofs of a revised and updated version of her first book. She said yes.

A friend whose husband had worked at Yale told her that this “consultation” was most likely a job interview and that it was a tactic frequently used to see if a candidate might be seriously considered. “If she hadn’t put that in my head, I could have blown the whole thing,” Ruffing says.

As it was, she was quite taken with the faculty she met at the Divinity School. The professors hoped to build the school’s offerings in practical theology, she learned, which meant there should be an applied element in any coursework. Ruffing described teaching her Meditation: East and West course, in which every class included contemplative practice, as well as students taking turns leading the same practice in a small group of peers.

Attridge, a Catholic, impressed her with his understanding of Ruffing’s constraints as a member of a religious order. When he offered her a three-year visiting appointment, Ruffing felt compelled to respond that her order would expect her to continue teaching for several years beyond that timeframe. He came back with a five-year, renewable contract, which made it possible for Ruffing to accept.

At the time, YDS students were clamoring “for curricular attention to the history and practice of Christian spirituality,” Attridge recalls. “We responded to those desires by looking for someone who combined expertise in the history of Christian spirituality and experience in its practice. We found what we were looking for in Sister Janet Ruffing.”

Once at YDS, Ruffing set about building the curriculum in spirituality. She was able to begin by drawing on her work at Fordham, but then “I would wake up in the middle of the night with curriculum ideas,” she recalls. For example, she wanted to teach a course on women mystics, so she developed practical exercises based on their teachings. One such leader, Gertrude of Helfta, was a Cistercian nun who created spiritual exercises for those seeking to strengthen their spiritual practice. “Her exercises are beautiful,” Ruffing observes. “One of them is joy. So, spend a day being happy.”

Ruffing has found YDS students particularly receptive to the study of spirituality. “Spirituality is how we experience God’s spirit in our life and how we cultivate that relationship,” she says. “I discovered that our students are hungry for spiritual life. I teach a course like Meditation: East and West so that, by the end of that course, they have a prayer life.” 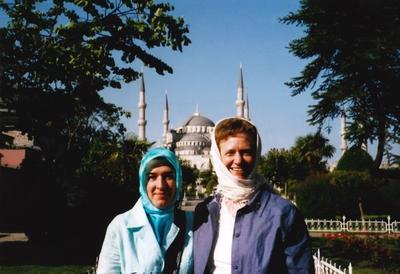 Among the courses Ruffing created or adapted at YDS are: Theology and Practice of Spiritual Direction; Meditation: East and West; Women Mystics; John of the Cross: a Guide for Difficult Times; Contemporary Christian Spirituality; Ignatius Loyola and the Spiritual Exercises; Discernment of Spirits through Selected Mystics; and Loving Creation: Spirituality, Nature, and Ecological Conversion.

“Janet Ruffing came to YDS to establish an academic program in spirituality,” notes Dean Greg Sterling. “She has firmly established spirituality in the curriculum and has been a significant contributor to the faculty. I am grateful for her commitment and for all of her contributions over a long and productive career.”

Dr. Ruffing, Attridge adds, “has brought to YDS a rich history of careful scholarship, personal practice, and experience in preparing others to serve as spiritual guides. As professor of the practice of Christian spirituality she has admirably fulfilled our expectations and has been a wonderful presence for students from all denominations interested in the ways Christians have thought about and practiced various forms of prayer, meditation, and focused personal discipline.”

Ruffing has published five books and numerous articles on spiritual direction and supervision, mercy spirituality, female religious life and leadership, kataphatic mysticism, prayer, and other technical topics in spirituality. Her text Spiritual Direction: Beyond the Beginnings (2000), is in wide use. She was a founding member of Spiritual Directors International and is past president of the Society for the Study of Christian Spirituality. She has also chaired the mysticism group in the AAR, has been an associate editor for The Way, and has served on the editorial board of Presence.

As she transfers to emerita status, Ruffing looks forward to continuing her scholarship on the Parisian mystic Elisabeth Leseur. Having published a volume of Leseur’s selected writings, as well as another, in French, of her correspondence with Sister Marie Goby, she hopes to explore the possibility of a third volume based in part on a spiritual journal written when Leseur was about to make her first communion at the age of 12.

She will most likely offer spiritual direction through Mercy Center on the Burlingame campus, where she began and where she will have an office.

Ruffing’s brother, an international economist who lives in Paris, has done the family genealogy. The pair plans an “ancestry tour” to Scandinavia. They already have followed the Austrian-Italian branch of the family. Its progenitor was a married priest during the Council of Trent. A distant cousin was the ultra-conservative prelate Ernesto Cardinal Ruffini, a prominent voice during the Second Vatican Council.

Ruffing celebrates the religious diversity of her family in all of its branches, much as she does that at YDS. “It’s really what happens in America at its best, when these denominational names are not overly determinative,” she says. Besides, if ever she had been in doubt about whether she belonged in New Haven, she need only have reminded herself that the British branch of her family includes her 11th cousin ten times removed, Elihu Yale.