The centuries-long relevance of Jonathan Edwards

While present-day Christian leaders in America vie to remain relevant, one colonial pastor stands out for having managed to maintain great interest in his work for 300 years.

Jonathan Edwards, widely regarded as North America’s greatest theologian, was a Christian revivalist preacher and missionary in the 18th century. His influence has spread around the world, in part with the help of the Jonathan Edwards Center at Yale University. The YDS-based Center maintains an open-access online archive of documents by and about Edwards, totaling nearly 100,000 pages.

Edwards graduated from Yale College in 1720. Three-hundred years later, the alumnus will be the focus on campus during the International Jonathan Edwards Conference, hosted by Yale and YDS October 2-4. (The keynote and plenary sessions are free and open to the public. See conference schedule.) 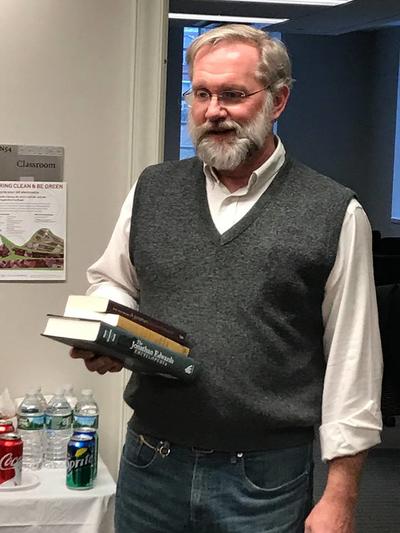 While Edwards is best known for his landmark sermon “Sinners in the Hands of an Angry God,” Center Director Ken Minkema says the sermon’s reputation as a reprimand about the dangers of hell is misguided.

“The sermon isn’t really about hell,” Minkema said. ”It is actually about the uncertainty of life,” said Minkema.

RELATED CONTENT: Listen to Ken Minkema discuss Edwards in the new episode of the YDS Quadcast

“We think of Edwards as the quintessential fire-and-brimstone preacher from his involvement in the revivals known as the Great Awakening. However, hell and damnation were actually of less interest to him. He preached on heaven more than hell,” Minkema says.

Edwards preached over 1,000 sermons to congregants throughout New England before his death in 1753, and his influence and audience have grown in recent decades. Readership of Edwards has gone global and is now at an unprecedented level.

“Edwards speaks to many different topics. The range of his writings is really impressive and comprehensive. He even speaks to environmental concerns,” Minkema notes.

Yale’s Jonathan Edwards Center has a global network of affiliates located in 10 countries including Japan, South Africa, and Brazil. Through the affiliates, Minkema and his staff assist students and scholars, serve on dissertation committees, offer online and onsite courses, and sponsor translations.

The Edwards conference, Minkema said, will “recognize the international nature of Edwards’ reach and breadth of interest. We are going to have exhibits with the manuscripts and bring in representatives from the various centers from around the world, and also nationally known historians and internationally known religious leaders.”

The event includes a special exhibition of parts of the Edwards collection at Yale’s Beinecke Rare Book & Manuscript Library. This will include a trove of Edwards materials recently added to Yale’s collection as a result of the affiliation between Yale Divinity School and Andover Newton Theological School in 2017.