Charles Forman, a revered emeritus professor at Yale Divinity School who pursued a lifelong commitment to global Christianity as a missionary and educator, has died at the age of 97. 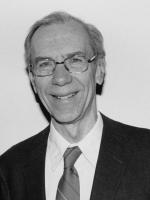 “Chuck was an iconic figure for many of us,” Dean Greg Sterling said in an email announcing Forman’s death to the YDS community. “His authenticity and warmth endeared him to all who were privileged to know him. It was his humanity and faith that most of us found so appealing about Chuck. We will miss him.”

An expression of his commitment to global education, Forman established the Charles Forman Endowed Scholarship Fund for International Students at YDS. Those interested may make gifts to this fund in his memory by contacting Jim Hackney in the Development Office at James.Hackney@yale.edu or by making a gift at https://ces.commerce.yale.edu/givingtoyale/gifts.cgi while designating the Forman fund.

Forman was born in Gwalior, India, in 1916. His grandparents and parents were Presbyterian missionaries, a heritage that shaped his own life. He received his university training in the United States, earning a B.A. and M.A. from the Ohio State University and a Ph.D. from the University of Wisconsin. He earned his theological degrees from Union Theological Seminary in New York including both an M.Div. and S.T.M. In keeping with his family tradition, Forman returned to India as a missionary, teaching at North India United Theological College from 1945 to 1950.

Forman came back to the U.S. in 1953 to succeed Kenneth Scott Latourette as a Professor of Missions at YDS. But even in the U.S., he never lost his love for or commitment to India and the broader vision of global Christianity. He held three major posts that allowed him to serve the region of his birth: He was chairperson of the Theological Education Fund of the World Council of Churches (1965-1971), chairperson of the Commission on Ecumenical Mission and Relations of the Presbyterian Church (1965-1971), and chairperson of the Foundation for Theological Education in Southeast Asia (1970-1989).

Forman taught at YDS for 34 years, from 1953 to 1987. His administrative talents were put to use for the school when he served as Acting Dean (1961-1963). Like his predecessor on the faculty, he was a beloved figure to students and his faculty colleagues alike. He was best known in scholarly circles for his The Island Churches of the South Pacific (Orbis, 1982). He continued to conduct research even in retirement, publishing an article on his grandfather, a pioneering Presbyterian missionary in the Punjab (today known as Pakistan), last month. Following his retirement, he took up several teaching assignments at seminaries in the Pacific-Oceania region.

Forman was preceded in death by his wife, Janice, and is survived by three children: Sarah, David, and Harriet.

A memorial service for Charles Forman will be held at YDS on January 18. More details will be shared with the greater YDS community in the weeks ahead.

Editor’s Note: This story was updated on January 15 to add information about the Forman scholarship fund.