Connie Royster stepping down after highly successful decade of service

Director of Development Connie Royster ’72 YC is departing from YDS at the end of this semester following nearly 10 years of service at the divinity school. 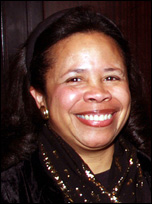 A student of Rev. William Sloan Coffin ’49 YC ’56 B.D. as an undergraduate at Yale, Royster brought her vast knowledge of the university to her position at YDS. She was a vital contributor to the successful completion of the $38 million Divinity Tomorrow Capital Campaign in 2011, and she personally brought in more than 40 new endowed scholarships during the campaign.

Royster was responsible for a number of new initiatives during her tenure, including the 50th reunion class scholarship initiative, which has brought in more than $1 million in new scholarship aid.

Dean Greg Sterling said: “Connie has served YDS well in a number of ways. She has played an especially important role in the stewardship of donors. The result has been that alumni and friends have been loyal to YDS in their gifts and estate planning. She has also been a bridge between YDS and the broader New Haven community in important ways. We will miss her welcoming presence and passion for the broader community.”

Coming to YDS after a successful career in law and several years of service in fundraising at the School of Forestry and Environmental Studies, Royster developed a planned giving program that has stood out as one of the best among the graduate and professional schools at Yale.

A familiar figure on the Quad, Royster has been a valued member of the community and a mentor to many students. “Connie’s door was always open and she was generous with her time and wise counsel on matters of concern to students,” said Nicholas Lewis, ’13 M.Div., former student council president and now a member of the YDS alumni board. “Connie has been an essential role model and mentor to the Yale Black Seminarians.”

A loyal graduate of Yale College, Royster worked hard to connect YDS to the larger Yale alumni and New Haven communities, and to project the divinity school’s voice nationally and globally. A member of the first Board of Governors of the Association of Yale Alumni and a founding member of YaleWomen, she will continue her Yale volunteer work, including as chair of the Dwight Hall board. She is already busy on the planning committee for this fall’s first cluster reunion for Yale College classes of the 1970s.

Royster will become a senior partner with Ideas for Action, LLC, a management consulting firm that specializes in working on big, bold ideas with universities, educational associations, corporations, governments, and communities.

At a farewell reception for Royster in April, former Dean Harry Attridge praised her for her “infectious enthusiasm, which she readily shared with alums, friends, and potential friends.” Added Attridge: “The talent and dedication that Connie showed here will not come to an end with this retirement party. I am sure that she will continue to be engaged in important, life-giving work in the years ahead.”