David Bartlett died early Thursday morning. He will long be missed and remembered.

David was a beloved member of the Yale community. After he completed his bachelor’s degree at Swarthmore (1963), he earned his M.Div. at YDS (1967) and his Ph.D. in New Testament at Yale University (1972). He was ordained in the American Baptist Church the same year that he graduated from YDS. 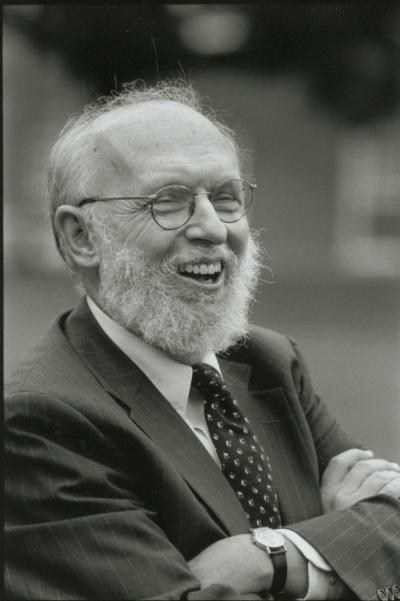 David’s training as a minister and scholar became the defining feature of his career: he was a pastor and a professor. These were not separate careers, but a single career that integrated the two roles. Harry Adams, one of David’s professors at YDS and later a colleague and friend, captured David’s life when he said: “he used his learning to enhance the work of parish ministry.”

David did this by serving both churches and schools. He was the senior minister of the University Baptist Church in Minneapolis (1973-1975), the senior minister of the Hyde Park Union Church in Chicago (1976-1979), the senior minister of the Lakeshore Avenue Baptist Church in Oakland (1981-1987), and a theologian in residence for the Trinity Presbyterian Church in Atlanta (2011-2016). He was also an exceptional professor. While serving at churches he held part-time appointments at United Theological Seminary of the Twin Cities (1973-1975), the Divinity School at the University of Chicago (1976-1979), and the Pacific School of Religion in Berkeley (1983-1987). He was a full-time member of the faculty for a number of schools including the American Baptist Seminary of the West and Graduate Theological Union in Berkeley (1970-1972), the Divinity School of the University of Chicago (1980-1981), Union Theological Seminary in Richmond (1987-1990), and Yale Divinity School (1990-2005), from which he retired as the Lantz Professor Emeritus. He could not, however, stay retired, and he soon joined Columbia Theological Seminary in Atlanta as a Distinguished Professor of New Testament.

The integration of scholarship and ministry is also evident in his publications. David was the author or editor of nearly twenty books, more than fifty articles in publications oriented toward ministry, and countless other shorter pieces in various publications. He is perhaps most famous for the twelve-volume Feasting on the Word. His co-editor, Barbara Brown Taylor, remembered her work with David: “I knew of him by reputation only when Westminster John Knox Press and Columbia Seminary approached us about co-editing a commentary on the revised common lectionary. The scope of the project was so vast that I could not imagine saying yes, but the prospect of working with David proved irresistible. We were sitting in a restaurant near the seminary named ‘Feast‘ when we decided to call the series Feasting on the Word. Twelve volumes later, David’s steady vision, ready humor, biblical genius, and vast network of friends had pulled us through. It was the hardest and happiest work I have ever done.”

David combined his passion for both scholarship and ministry by focusing on homiletics. He was a superb preacher and a dearly loved teacher. Nora Tubbs Tisdale was his colleague first at Union Theological Seminary and again here at Yale. She remembers how David was not only an effective pedagogue, but a model: “With deep conviction, a heavy dose of self-deprecating wit, and a delightful sense of humor, David challenged students to preach with biblical integrity, theological depth, and pastoral sensitivity. He also modeled excellence in preaching through his own engaging and inspiring sermons.” All of us who heard David preach know how true this is. His former students were so inspired by him that they have created a scholarship in his honor, an honor not many faculty receive. This past spring he was selected to receive our alumni/ae Distinction in Theological Education award, an honor that will be presented next Thursday evening.

David was far more than a scholar and minister: he was a model Christian, a first-rate human being. He was always sensitive to the needs of others, a trait that served him well in the important administrative roles he played at YDS. While he was at Yale, he served as our associate dean and then dean of academic affairs (1993-2004). In the final years of his service he worked closely with Harry Attridge, who later continued the partnership with David in the production of the Yale Bible Study videos. Harry said: “It was one of the greatest joys of my time at Yale to have known David as a colleague and friend and to have worked with him in helping others to appreciate Sacred Scripture.”

David was a devoted husband to Carol and dedicated father to Jonah and Ben. He had a deep, rich voice and a booming laughter that bounced around rooms announcing not only his presence, but his joy of life. He and Carol were exceptionally generous. They opened their home to others in ways that few do (some of you have stayed in their homes). They went out of their way to welcome newcomers to the community. David and Carol have not only been colleagues to many of us, they have been dear friends.

David had been as vibrant as ever before he was beset last summer by a pair of strokes, from which he could not recover. We mourn the end of an exemplary life that is too rare in our world. As Barbara Brown Taylor wrote: “The only thing that tempers his loss is knowing for sure how much better the world is because David lived in it.” I will simply say, Amen.

A memorial service for David will be held in Marquand Chapel on Wednesday, October 18, from 11:00 a.m. to noon. A reception will follow.

If you were unable to attend, you may view a video of the memorial service on the YDS Livestream page.