It is my sad duty to report that Yolanda Smith has passed away. Yolanda was a beloved member of our community whose gentle but buoyant and courageous spirit inspired all of us. We will miss her sorely.

Yolanda was educated at three different institutions. She remained in her home state for her undergraduate training and earned her bachelor’s degree from Arizona State University. She then headed east and earned an M.Div. from Virginia Theological Seminary (1990) before returning to the West where she completed her education by earning a M.A. and Ph.D. in theology at Claremont (1997). 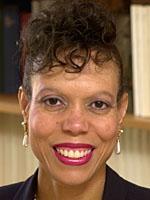 She joined the YDS faculty as a visiting assistant professor in Christian education in 2000. She became member of the core faculty as an assistant professor in 2002, serving in this capacity until 2008 when a bout with cancer forced her to change directions. On disability, she continued to serve YDS part-time as a research scholar and a lecturer. She was able to teach at least one course each year through the 2014-2015 academic year. She was recognized by her peers in the profession when she was elected president of the Religious Education Association (2012-2013).

While at YDS Yolanda launched a project that has had an impact on all of us, “Been in the Storm So Long.” It chronicles the history of African-Americans in theological education with a focus on YDS. Lecia Allman ’16 M.Div. worked on this project with Yolanda while she was a student at YDS and from this project provided a great deal of the material that we have used during Black History Month. If you have not visited the web site, I urge you to do so. Listen to Yolanda explain the project: http://storm.yale.edu.

About a year and a half ago, Yolanda went home to Phoenix to care for her dying mother. While she was there, she had a relapse of her own cancer. She was positive about her future, even though the odds were against her. In all of the conversations that I had with her about her illness and arrangements with YDS, she never expressed self-pity or asked for special consideration. In my first year as dean, I gave her my word that as long as her health permitted and I was dean, she would have a place at YDS, a promise that I have never regretted.

Yolanda died Wednesday morning in Dallas. She was staying with her sister Valencia, who was caring for her. I know that I speak for faculty, staff, and students who knew her when I say that we have lost a wonderful human being and a fine Christian. We will all miss her quiet and polished presence, her calmness in the face of death, and her contributions to our community. We do not yet have details about the arrangements for a funeral but will pass them on when we have them. I am grateful that I could call her a colleague and friend.