While growing up in Schenectady, N.Y., Dr. Benjamin Doolittle ‘91 B.S., ‘94 M.Div., ’97 M.D. was “curious and outgoing,” he recalls.  “I was the kid who was friends with everyone: the athletes, the drama club, student government, you name it. I honestly liked everyone and loved doing everything.”

Church was also a big part of Doolittle’s childhood. Reflecting on his early religious beliefs, Doolittle remembers the love. 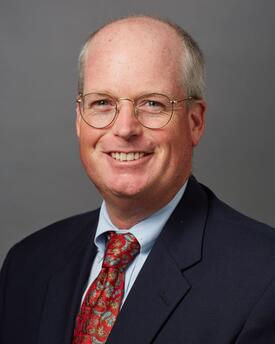 “I was embraced by this wonderful church community,” he said. “I couldn’t have articulated my spirituality at the time, but I know I felt loved. That love has led me to become both the doctor and pastor and everything else I am today.”

Doctor and pastor—rarely has a person done so much to exemplify both in one life and one career. The distinction was codified last November when Doolittle was promoted to full professor at Yale’s School of Medicine, a title he holds alongside his YDS faculty appointment as Professor of Religion and Health. He is believed to be Yale’s first full professor with a joint appointment at the Medical and Divinity schools.

Doolittle engaged in numerous extracurricular activities as a Yale undergraduate. But his studies were his primary source of satisfaction.

“I was accepted to Yale off the waiting list and started in the fall of ’87,” he said. “I majored in biology and philosophy. I remember sequencing a gene for my biology thesis and then talking about the ‘beloved community’ in philosophy.”

After graduation, Doolittle decided to pursue religious education and began his studies at YDS.

“I thought YDS was the right place for me because it balanced serious academics with pastoral training,” he said.

Doolittle describes two of his favorite classes: a preaching class with David Bartlett and a course on social justice with Richard Fern. Bartlett, now deceased, was “a very moving speaker,” Doolittle said. “He was one of those rare people who inspired through kindness. And Fern combined a passion for social justice with a strong foundation of intellectual integrity. I learned so much from both.”

While still a student, Doolittle heard that Pilgrim Congregational, a small church in Fair Haven, needed a pastor. He decided to give it a try.

“Even though I was young, I fell in love with being a pastor,” he said.

Doolittle stayed on as the pastor, even when he began studying at the Yale School of Medicine during his final year at YDS.

“I always wondered how the body is made, how it breaks apart, and how we can fix it,” he said. “I remember finishing a biochemistry class and rollerblading up the hill to study the wonderful Hildegard of Bingen and her prophetic visions. I loved both.”

Currently, Doolittle is boardcertified in internal medicine and pediatrics.

“I attend on the medicine wards and in the newborn nursery,” he said. “My patients range in age from babies to the elderly. In the primary care setting, I work mostly with patients struggling with addiction and HIV. The ongoing relationships with patients are the meaningful part of my role as a healer.”

Doolittle always retained his interest in the relationship between body and spirit. In 2013, he attended a “research bootcamp” at Duke University run by Harold Koenig, M.D., the Co-Director of Duke’s Center for Spirituality, Theology and Health. Koenig’s research focuses on the effects of religion and spirituality on health.

“Religious and spiritual observance have measurable and important health benefits,” Koenig said. “Medical schools must support initiatives on them in their curriculum.”

Indeed, on the last day of the program, Koenig encouraged the participants to return to their institutions and start programs for religion and health. Doolittle did just that.

“I teamed up with Lydia Dugdale, a bioethicist who is now at Columbia, and we got started,” Doolittle said. “In 2014, we officially created the Yale Program on Medicine, Spirituality, and Religion.”

Doolittle explains the four components of the program. The first is the monthly lecture series.

“We invite the most interesting, charming people to a community forum to discuss the intersection of medicine and religion,” he said. “For instance, we’ve had surgeons from diverse backgrounds discuss religious ethics, including Christians, Jews, Hindus, and Muslims. It’s a rainbow of people who come together and have wonderful conversations.”

Coursework makes up the second component of the program.
“I teach an applied philosophy course at the medical school called Life Worth Living,” Doolittle said. “The course looks at deep, philosophical writings, often by physicians. We also read op-eds and watch TED Talks. There’s so much pressure for medical students to perform; it’s therapeutic to look more deeply at a valuable life.”
Doolittle also co-teaches a course at YDS called Theology and Medicine, with Mark Heim, the Samuel Abbot Professor of Christian Theology at Andover Newton Seminary at YDS. The course explores contemporary medicine from a theological perspective, covering such topics as suffering and healing.

“Theology and medicine are fundamental to our being,” Doolittle said. “Everyone will get sick and die. As seminarians, we must contend with our bodies and examine healing from all angles.” 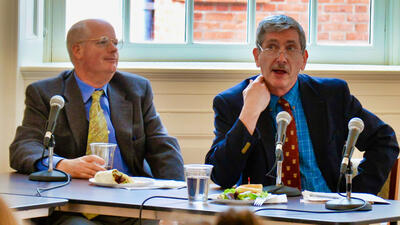 The third component of the program is the convening of a group of fellows, usually graduate students or residents, who pursue mentorship and scholarship together.
The fourth part of the program is devoted to examining research on the connections between medicine, spirituality, and religion, including Doolittle’s own work.

“A big part of my research the last few years has been about the intersection of religion and medicine, with particular attention to well-being,” he said.

In the midst of a pandemic, Doolittle is very interested in the inner life of healthcare providers.

“It’s important that healthcare providers examine burnout,” he said. “We’ve been through so much the last couple of years and seen so much lonely suffering. I’ve been deeply touched by the reflections of my colleagues. Having conversations about our experiences can be healing unto itself.”

Jane Abbotsmith is in her fourth year at Yale School of Medicine and a Ph.D. student in religion. She was the program’s first fellow.

“The fellow’s role is scholarship and discussing research,” Abbotsmith said. “It provides mentors who highlight the overlap between religious ethics and medicine. And the monthly meetings introduced me to people with similar interests.”

“The beliefs and practices of patients often inform their medical decision-making,” she said. “Those conversations are critical and can change the course of healing.”

As a physician interested in spirituality, Marta Illueca ’18 M.Div. felt a natural connection when she met Doolittle.

“When I got to YDS, I signed up for the monthly conferences and learned so much,” she said. 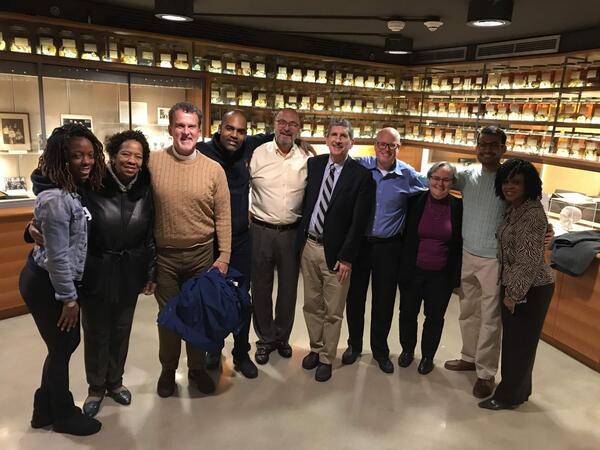 Illueca also took Doolittle’s Theology and Medicine class. She would later become a fellow and examine the relationship between healing and prayer.

“I’d had a lifetime of medical thinking, and I was being trained in theological thinking,” Illueca said. “The Theology and Medicine class challenged us to consider how the two areas come together. Overall, Ben has helped me discern the need to be a pastor, and yet combine it with medicine and science. He’s been an amazing mentor.”

Doolittle is currently pastoring at Pilgrim Congregational, the same church he pastored while in divinity school.

“After a long loop of other churches and ministries, it is great to be back where I began,” said Doolittle, who returned to Pilgrim in 2014.

Susan Langhans has been a member of Pilgrim Congregational for most of her life. She is thrilled Doolittle has returned.

“As a pastor—both then and now—Ben brings energy, resources, and so much more,” she said. “He also makes it a point to reach out to the greater community. He’s very inclusive.”

“When we got a new ramp inside the church, he and my son put on rollerblades and skated down it as a christening,” she said. “Recently, he brought his drone to church to fly around for everyone’s enjoyment.”

“We’ve had families who’ve struggled with addiction and illness, and he’s always supportive,” she said. “I also love that he comes from a medical background. He’s got so many wonderful facets to him that we all learn from.”

Dave Christensen is the minister of music at the church and also teaches voice, piano, and dance.

“I have known Ben for thirty years,” he said. “I was just a kid when he first pastored at Pilgrim.”

Over the past few years, Christensen and Doolittle have started writing hymns together.

“Ben approached me about collaborating,” Christensen said. “It has been great. I write the music, and he writes the lyrics.”

At first, Doolittle expressed anxiety about writing, but Christensen encouraged him.

“I told Ben he’s been a lyricist his whole preaching life,” he said. “His prayers and sermons have a lyrical cadence. He writes beautifully. Our goal is to eventually have our own book.”

Doolittle loves the creative process and is inspired by Christensen’s musical ability.

“I think we have about three really good hymns at this point,” Doolittle said. “Writing is a fun, joyful act, especially with such a talented colleague.”

Doolittle loves his work and seeks to expand it in all areas, especially the Yale Program on Medicine, Spirituality, and Religion.

“I appreciate the Cartesian dualism of the mind and the body as separate because it provides a language for wrestling with health and disease,” he said. “But when people are in a hospital bed, they do not think about mind versus body. They just think, ‘I am hurting.’ Ultimately, there is just the human being. Teasing apart the mind and the body is an artificial distinction.”

Doolittle also notes how, as an evidence-based practicing physician, he has profound conversations with other practitioners.

“I think people, including physicians, are hungry for deeper conversations,” he said. “The science of medicine has caused so much good in this world, and that science is not separate from God. It just takes curiosity and imagination to build a bridge between the two worlds. Those worlds feel very divided right now, so I enjoy building a bridge. I believe the Yale Program on Medicine, Spirituality, and Religion plays a critical role in that bridge.”

Doolittle is very grateful to the Yale School of Medicine and Yale Divinity School for helping him create such an essential program.

“Hopefully, the program will continue to grow in significant ways,” he said. “It is essential that we understand the unity of mind, body, and spirit. We must move toward a more holistic understanding of what it means to be human in the world today. It is through a deeper understanding that we truly heal.”