The effect of the new tax bill on schools like YDS

The new tax legislation signed into law by President Trump just before Christmas will impose an unfair burden on institutions that are committed to providing financial aid for students. The new tax law adds an excise tax on the net investment income of college and university endowments above $500,000 per student. The income produced by a $500,000 per-student endowment does not cover the cost for each student, let alone the full operating expenses of a school or college. 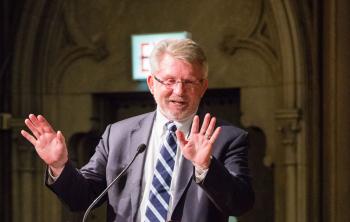 Let me explain. At a school like Yale Divinity School (the same is true for a number of other schools at Yale and elsewhere), there are two major sources of income: the return from the endowment and tuition. We have made it a public goal to eliminate tuition for everyone with demonstrated financial need by 2022. This has been and continues to be our first priority. Students who come to Yale Divinity School do not come for financial reasons: their ambitions are to serve people through ministry, nonprofit agencies and social justice organizations, and higher education. We do not want students to incur levels of debt that will force them to make career choices on the basis of potential salary. They did not come here for financial reasons and we do not want finances to dictate their choices when they graduate.

But what happens if we eliminate tuition for everyone with demonstrated need? We will only have the return from our endowment to support the school. The federal government has decided that it wants a share of that return, 1.4% of the endowment’s earnings to be precise.

What does this amount to? The endowment’s earnings vary from year to year. At this point in time, I am not sure that anyone knows exactly how everything will be calculated since not all investments in endowments are liquid. Let’s assume for the sake of argument that the government elects to consider everything. For Yale Divinity School this would amount to a tax of 1.4% on the return of our $362 million endowment. We consider a return of 8.25% to be break even since we distribute 5.25% of the earnings and allow 3% for inflation. If we use the 8.25% as a figure, the return on $362 million is $29,865,000. The tax would be $418,110 at 1.4%.

The only way that can pay this tax is to curtail spending. We do not have $418,110 in extra program costs that we can eliminate; we already operate on a thin margin for programming.  We only have two brutal choices: smaller-than-planned increases in student financial aid or leaving staff and faculty positions unfilled. I am grateful that Yale University is committed to assisting us make as smooth a transition as possible to cover the new tax burden. We will continue to make student financial aid our first priority.

Legislators complain about the size of endowments of schools like Yale. Yes, Yale has a large endowment. We are trying to build a larger endowment to create more financial aid for our students. One of the secrets of higher education for a number of years has been that the least expensive education for someone with limited resources is an education at one of the premier schools with a large endowment. At Yale College, if the parents earn less than $65,000 per year, a student attends without charge. At Yale Divinity School, we provide 90% to 95% of our students with financial aid. Legislators either did not think through the implications of the tax bill or do not want to support institutions like Yale Divinity School, the Yale School of Music, or Berea College in Kentucky (and many other liberal arts colleges) that build endowments for student financial aid.

The implications are serious. The investments that we make in higher education are for our future, our future as a society. American higher education has been the undisputed global leader in the second half of the twentieth century by any standard measurement. The new tax legislation not only threatens to erode our global leadership but to put at risk those institutions that have made student financial aid a priority by undermining their capacity to provide that aid. Worse yet. it threatens to reduce the number of individuals who are willing to sacrifice their own welfare to serve the needs of others.

This is one aspect of the legislation that needs to be changed and this cannot happen soon enough.