Every religious leader has a moral duty to preach on the climate crisis, says author and activist Jim Antal ‘78 M.Div.,

In an interview for the new episode of the YDS podcast series—released just weeks before the 26th U.N. Climate Change Conference—the Rev. Dr. Antal challenged the idea that religious figures should stay out of political issues and urged leaders of every faith in America to use their moral leverage to engage people of faith to address environmental crises.

‘The Urgent Need to Preach on Climate’: Listen to the YDS podcast interview with Jim Antal 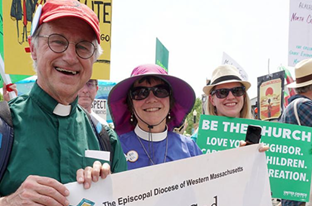 “Addressing the climate emergency requires that we change laws—that’s political. And use the pulpit to advocate for such laws is faithful,” said Antal, who is the author of the book Climate Church, Climate World: How People of Faith Must Work for Change.

A 2019 Pew Research Survey found that nearly two-thirds of Americans said churches and other houses of worship should keep out of political matters. For Antal, the climate emergency is not partisan, but a matter of life and death for the planet and its inhabitants.

“Humanity has gained the capacity to impact all future generations. We can create for them a better future, or we can wreck the earth,” he said.

According to the 2021 climate science report of the UN Intergovernmental Panel on Climate Change, “Human influence has warmed the climate at a rate that is unprecedented in at least the last 2,000 years.” Extreme weather events in the United States such as drought in California and extreme flooding in the southern states have “people realizing from their firsthand experience what the IPCC report from the United Nations is saying,” said Antal.

This generation’s vocation is to save the world from the climate crisis, according to Antal, who said the public must hold oil, coal, and gas companies “legally and criminally responsible for three things.”

“First decades of misinformation campaigns, and science denial. Second, knowingly making profits for their stockholders and executives, while poisoning their investors along with everyone else. Third, human rights violations, especially in those communities of color that for decades have been treated as sacrifice zones.”

Antal, who serves as Special Advisor on Climate Justice to the General Minister and President of the United Church of Christ, also said that ending the climate crisis requires a spiritual transformation.

Combating climate change “requires systemic change, and systematic change involves a change in values and a change in morals,” he said.

This is a job for religion, according to Antal.

Emily Judd ‘19 M.A.R. is a senior communications specialist at the Higher Committee of Human Fraternity. Host of the YDS podcast series, she has a master’s degree in journalism from Georgetown University in addition to her YDS degree.