As a bored high schooler, Travis Helms ’13 M.Div. was flipping through an English literature anthology when he stumbled across T.S. Eliot’s “The Love Song of J. Alfred Prufrock.” Afterward, he recalls, he was shaking, astonished that a poem could make him feel a mystical communion with someone who had been dead for half a century. From then on, he knew he wanted to be a poet.

“There was something in the beautiful strangeness of the [poem’s] opening lines that struck me as both utterly surprising and totally inevitable,” Helms says. “It felt as if I were discovering a truth that had always been there, and then wanted to find such ways of saying things that would lead others to feel the same.” 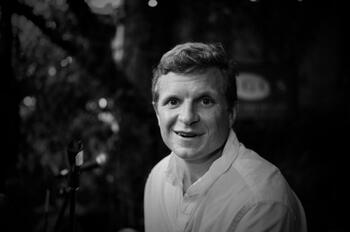 Though he didn’t know it then, this discovery would be the first step toward a unique ministerial life that interweaves the practices of priesthood and poetry, and to the founding of the LOGOS Collective, an organization that seeks to “evoke transcendence through poetry, ritual, and conversation.”

As his fascination with poetry grew, Helms says, he also experienced a growing awareness of his call to the priesthood, which led him to YDS and Berkeley Divinity School. During his field placement at Christ Church New Haven, his love for the sacraments deepened. Simultaneously, through discovering the theopoetics work of David Mahan ’95 M.A.R. and the poems of Anglican priest Malcom Guite, Helms grew curious about how poetry can embody spiritual truth in ways that other forms of discourse might not. After completing doctoral work at Cambridge, he returned to the States and served as a youth pastor after which he was appointed Campus Commissioner to the Austin Canterbury where he serves today, ministering to university and college campuses. While Helms’ hunger for experiencing the sacraments never diminished, he remained curious about other ways that church could be curated, which led to the creation of the LOGOS Collective.

Helms attributes the LOGOS Collective’s theoretical framework to the vision of Andy Doyle, the Bishop of the Episcopal Diocese of Texas. Rather than solely relying on a traditional church model that focuses on baptizing and confirming new Episcopalians, Doyle encouraged the diocese to identify already existing possibilities for collaborating with the community without necessarily expecting to bring people into the church.

At the same time, Helms was talking with Austin-area poet and educator Grace Ortman about how the typical format of poetry readings can often feel frustratingly transactional: the reader “discharges” poems from the podium to an audience that passively absorbs them. He was also encountering poets who longed for a deeper connection with transcendent, whether they called it “God, beauty, mystery, quantum weirdness, wonder—whatever it is that adheres deeply within reality that we can’t explain away through rational empirical analysis,” he says. He started wondering “what it might look like to lovingly, artfully, non-dogmatically incorporate aspects of sacred ritual into the format of a poetry reading,” he says.

Helms then met with several other priests and poets to explore incorporating liturgical rhythms and ritual participation into a poetry reading. The format they settled on begins with silence: after Helms rings a prayer bell, the group sits quietly before reading a poem responsively—like a psalm might be read antiphonally in church. Two poets then share three poems each (the last of which is printed for everyone to read). The audience reflects on the poems in small groups and then converses with the poets. The event concludes by sharing food and drink together, a sort of communion, before closing with the reading of a last “benediction” poem. The series has attracted a wide range of poets that features six Pulitzer Prize winners including, most recently, Jericho Brown, as well as former U.S. poet laureate Rita Dove.

The gatherings launched in 2019 at the Lazarus Brewing Company in East Houston. Shortly after, the COVID pandemic hit, which made in-person gatherings impossible. Helms initially planned to let the programming go fallow. But Jason Meyers, an Executive Director of LOGOS partner organization EcoTheo, encouraged Helms to embrace the opportunity to make the event virtual. They experienced a learning curve as they translated the original in-person format to Zoom, but the gatherings continued to grow and flourish. 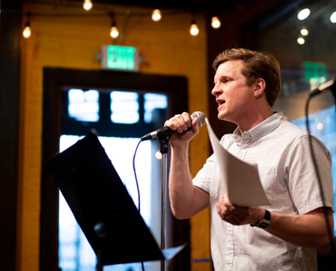 Readers and audience members alike come to the LOGOS Collective from an array of religious and non-religious backgrounds, which makes for lively and interesting discussions. At the same time, LOGOS has expanded the imagination of churchgoers in traditional congregations regarding what ministry can look like.

According to poet, UCC minister, and YDS alum Nate Klug ’13 M.Div., by drawing on religious ritual unapologetically, LOGOS “refreshes the meaning of that ritual, shows that the language is still alive, as it were.”

Helms has always felt the church sanctuary to be a sort of home for him; even so, his feelings are complicated in light of the church’s complicity in perpetuating racism, patriarchy, and other structures of power and privilege.

“Fairly regularly,” he says, “I vacillate from just loving the church, this wonderful and sacred mystery that offers us the gift of the sacraments and this wonderful language of the liturgy, […] but also then thinking, like, burn it down.”

Considering this, finding ways to reimagine “how the church shows up in the world” is critical, according to Helms. As he grows to understand Christianity through the lens of liberation, he says, he sees Jesus doing acts of theopoiesis—moving deeper into relationship with marginalized individuals and systemically oppressed groups.

“And that’s where the scriptural grounding of [the LOGOS Collective] comes to me,” he says. “If the Christian life is about the imitation of Christ, what does that look like in a temporary context? It looks like embodying Jesus’s commitments to love and justice and liberation in as many contexts as possible.”

Alongside Cave Canem and EcoTheo, the collective launched the Starshine and Clay Fellowship, a new initiative providing financial and development support to emerging Black poets. On April 6, they will partner with Spencer Reece ’11 M.Div. and The Red Door Reading Series at St. Mark’s in Jackson Heights for a LOGOS reading featuring poets Carmen Giménez Smith and Ariel Francisco to promote the 2022 Lorca Latinx prize for a bilingual chapbook. They are also planning an in-person event in New Haven fall of ’22. For those interested in attending a gathering virtually, livestreams can be found on the LOGOS Facebook page.