In the midst of humanity’s divisions and convulsions, John Grim is watching the world slowly wake up to the urgency and ethics of Earth care. At Yale he feels that he joins with others to help make that happen. 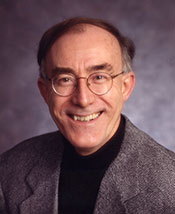 “The question is: What values do we human communities share?” says Grim, co-director of the Forum for Religion and Ecology at Yale with his wife, Yale scholar Mary Evelyn Tucker.

“Ultimately, while we can distinguish ourselves, we are not separate. We have different ways of making a similar point: We are interwoven with the natural world, and thus need an ethic of care, an ethic of respectful use. No one personality or community or denomination will trigger the ecological changes needed. I think it’s ‘a hundred flowers blooming’ across the world. Many communities, many relationships will make it happen.”

“We are not naïve to the problems of religion – its intolerance, its violence,” he says. “Despite some very sharp difference, we’ve seen the possibility of dialogue. Mary Evelyn and I are both hopeful that religions can make a contribution to a sustainable future.”

The wisdom of Native peoples

Like Tucker, Grim is a Yale senior lecturer and research scholar with appointments in the Divinity School, the School of Forestry and Environmental Studies, and the Department of Religious Studies.

For five decades he has been particularly drawn to the wisdom of Native American peoples and what they can teach us about mutually enhancing human-Earth relations. He has a longtime relationship with the Crow tribe in Montana, where he and Tucker have been adopted into a Crow family.

“Adoption is a pathway into ritual life,” he says. “Certain doors open through this pathway. Through their rituals there’s a re-creation of the cosmos in order to renew nature and animals and themselves. Native people are trying to preserve values that are essential to their survival. I want to convey their resilience. Indigenous knowing is a moving balance of life-taking and life-giving relationships. In this spirit, indigenous peoples are really speaking out in the face of climate change and standing up to degradation in many places across the continent.”

Grim’s long immersion in Native American traditions has positioned him for larger, global conversations unfolding rapidly in the 21st century. His work these days is helping articulate ecological ethics at the frontier of interreligious dialogues. His teaching embraces many styles of learning – classroom, filmmaking, books, online.

Grim and Tucker are pioneering hybrid online classes at Yale in religion and ecology. Students do the work online but also meet the professors once a week in class. This semester they are teaching Yale’s first online six-week course on East Asian religions and ecology. It is open only to Yale students for now, but they hope to expand the course offering to other interested universities – and eventually offer 10 online courses on ecology and other religious traditions. They are teaching Introduction to Religion and Ecology online this semester as well.

Grim and Tucker are also teaching “Law, Environment, and Religion” this semester with Doug Kysar, the Joseph M. Field ’55 Professor of Law at Yale Law School.

“We discuss how economic development can proceed with attention to the precautionary principle so that there is mutual flourishing of human beings within natural systems,” he says.

“There’s great interest in learning how to quantify the benefits of nature, not just the value of its exploitation. Does a river have value to us besides being a place for dumping? What about its role in the ecosystem, its value as a source for fresh water? What about its aesthetic value? Behind all our class discussion is a looming question: What values are driving us today? Do these values include social justice, eco-justice? These questions flow like a current through the class.”

Journey of the Universe

Then there’s the Emmy award-winning “Journey of the Universe” PBS film and companion book (published by Yale University Press). Grim and Tucker are executive directors of the film. Tucker and Brian Swimme are authors of the book. Together they present a fresh story about the origins of the universe, its principles of self-organization and emergence, and the hopes for an evolving Earth community of mutual concern.

The film has built a following. Some 66,000 viewers have rated it on Netflix over the past year. Grim and Tucker will be presenting the film in South Korea this summer.  The film has been translated into Korean and Spanish. They have also shown it to audiences in Europe, Latin America, and China.

Grim was raised in North Dakota in a progressive Roman Catholic household, which gave him an openness to the spirit of Vatican II, other Christian traditions, as well as evolutionary theory, he says.

He went to St. John’s University in Collegeville, Minn., as an undergraduate. He received an M.A. and Ph.D. degrees in the history of religions from Fordham, conducting research in shamanism and its healing practices in Native American Anisinabe traditions.

At Fordham he met historian of religions Thomas Berry (1914-2009), a comprehensive thinker who endeavored to weave the findings of science with the insights of religious traditions. Berry became a lifelong friend and mentor who also saw evolution as a cosmic story that envisioned a participatory role for humans.

Grim also met his future wife at Fordham, and soon he and Tucker would forge a remarkable partnership as university professors, authors, book editors, conference organizers and conversation starters on the ever-widening relations between religion, science, and care of the Earth.

“This life work has taken us out of the silo mentality,” says Grim, who came to Yale with Tucker in 2006. “The issues are too pressing to remain isolated in particular disciplines only.”

“That was a decisive turn – it allowed us to see a multidisciplinary picture in the religious ecologies and religious cosmologies of particular traditions,” Grim says.

His perspectives on world religions give him a glimpse of what different traditions can bring to each other. Asia can teach the West, and vice versa, he feels. Modern western worldviews and religions honor individualism, rights language, and forms of rationalism. East Asian traditions value community and holism. They see continuity in reality expressed by concepts such as qi (or ch’i). Qi is a circulating force of matter-energy foundational to life. In South Asian thought, community is also valued. For example, dharma points toward an inherent duty and responsibility to the larger community of life.

New understandings open up in his classroom when Divinity and Forestry students mingle. In one class, Grim reads from the work of a Hopi elder on the importance of blue corn within his culture in the southwest.

“It’s interesting to see how divinity students and forestry students react differently to the reading. The FES students will talk about the nutrient flow and other technicalities of root systems and soil. Divinity students pick up on the power of the symbolism of the corn. In the class, their conversation moves into peer learning. They begin to teach one another.”

For John Grim, such teaching moments inside and beyond the classroom will eventually inspire more empathetic and humanizing principles of environmental practice and community values. Religions, he feels, must find a way to be central to the conversation, realizing that they may not be sufficient but are necessary for environmental solutions.