The ‘fleshiness of the story’: David de Leon on the complexities of Asian American Christian identity

E. David de Leon ’21 M.Div., is co-author with Sabrina S. Chan, Linson Daniel, and La Thao of a forthcoming book, Learning Our Names: Asian American Christians on Identity, Relationships, and Vocation (InterVarsity Press 2022). We spoke about the relationship between the complexities of understanding “Asian American Christian identity,” the interconnectedness of journeys toward justice, and what is next for him in his vocational path as a doctoral student in Systematic Theology at Fordham University. This interview has been edited for length and clarity. Note: This article uses the spelling “Pilipino” at de Leon’s request. 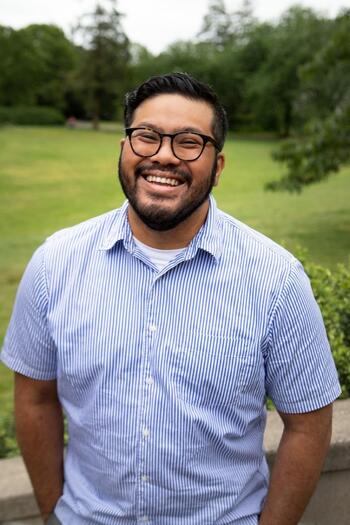 How has your sense of your Asian American identity shaped your faith?

I grew up in a Pilipino American immigrant church in a very Pilipino town in the San Francisco Bay area, but we didn’t really talk about being Pilipino very much. You just kind of were what you were. A lot of my adolescent and young adult faith journey was reconciling myself to myself and to the stories of self-hatred that I had grown up with. Often I didn’t know why I felt different. It wasn’t until college at UC Berkeley where I was a part of a campus ministry that I was pressed to ask myself, “Why do I feel unsafe or weird around other Pilipinos?” I’d eventually describe my experience as confronting my internalized racism and the coloniality inside of me, which was significant for my journey in learning to love myself and feel safe and whole in my own skin. That led me to explore my ethnic identity and culture in college and eventually to become a campus minister there. This journey with my identity was wholly tied up in my journey of faith. My notion was, if there was one student that I could walk alongside who’d benefit from allowing me to bear witness to their response to the Spirit in their lives, especially as it pertains to them being a Pilipino American, then the work would totally be worth it.

How did your faith journey inform your vocational calling and what led you to YDS? Could you tell me a little bit about your experience at divinity school?

My experience as an undergraduate campus minister expanded into a 12-year career. My colleagues and I focused mostly on contextual ministry and ethnic identity development as we helped students integrate their faith lives, their cultural experience and their embodiment of being Pilipino. My time at YDS came about because I realized that I needed more space for theological reflection apart from the direct practice of ministry. I wanted space to step back and reflect more deeply on questions like, “Why do I minister this way?” “What are the underlying assumptions that I have about scripture so that I lead Bible study this way?” “What assumptions about the church cause us to structure our ministries this way?” And, “What are the theological underpinnings of how we approach student spiritual formation?”

My first and second years at YDS, there were 12 Pilipinos there at once. We quickly formed a group called PAGOD, which stood for Pilipino American Graduate (Students) of Divinity. (The acronym was a fun little play on words since “pagod” in Pilipino means tired). We shared our work and spoke with early-career and mid-career Pilipino academics about their scholarship as it pertained to our work in theology and biblical studies. Doing theology as a communal endeavor was one of the most life-giving experiences at YDS. Despite the diversity of our experiences of Pilipino American culture and our areas of expertise, we had a spirit of mutual learning. I wouldn’t have decided to pursue theology and doctoral work had it not been for this group and the generous professors who were willing to step into my frames of reference as I explored questions around what it meant to be a Pilipino American and what theological questions arose out of my body and experience.

In the book, you describe how the label “Asian American” can feel like a one-size fits all T-shirt: “we can all put it on, but it seems to fit some people better, and everyone feels a bit awkward in it.” Relatedly, you write about the importance of holding one’s story with “grace and power” and collectively telling a larger story for the sake of solidarity both “internally within the Asian American community” and “externally alongside other racial and ethnic communities.” Could you tell me more about the complexities of the “Asian American” label within a ministry context?

The biggest revelation for me in the past five or six years is how thin my notion of identity was before. I don’t mean to say that I have such an enlightened understanding of identity now, but my perspective has shifted. It often felt like Asian American Christians in campus ministry approached ethnic identity solely on metaphysical or ontological terms. Like, “God has made me beautiful,” or “God cares about your ethnic identity.” Both statements are true and using that language can be helpful, especially when you’re encouraging people to move from apathy or self-hatred regarding ethnic identity to a place of self-acceptance and healing. Where that language becomes limiting, though, is where you realize that the stories that make up your identity can be wildly different from those who share the same identity labels and sometimes come into conflict with other people’s stories.

My hope for the second chapter of this book is to give people, particularly young, Christian, Asian American, college-age students, handholds for talking about the complexity of these issues. For example, to explain that when I talk about identity, this is what I mean: the stories that have shaped me that I claim, that I hang onto—even the ones that I’m not entirely aware of but affect me. To help them understand that these stories interact, and have interacted historically, with stories from other racial and ethnic communities. And that these stories have sometimes been co-opted and weaponized by whiteness. There’s a way that the tangible fleshiness of a story really puts things into perspective and gives students and young Asian American Christian handholds—not just for understanding the beauty and dignity of their identities  but the beauty and dignity of other folks’ identities and how their stories collide, interact, and run parallel to each other.

What are some pressing issues that you’re currently observing in the Asian American communities you’re a part of?

Having moved to New York recently it’s been a raw experience engaging with the high-profile murders of Asian American women in the city. At the vigils I’ve attended in the city, I’m seeing many Asian Americans advocating for safety within their communities without asking for more policing and while centering the necessity of more mental health resources in the city. I’m grateful to see that consciousness. When I talk about stories in this book, this is what I am trying to get at— sometimes Asian Americans fail to see (and I also count myself among these folks) how interconnected journeys for justice are. When I confront anti-Blackness in my own family, or the nativist sensibilities that my own immigrant family has come to embrace, I’m doing work for our community as well. To advocate for another community is to advocate for our own communities, to push back on white supremacy in its various forms. If you give white supremacy air in one space, it gives fuel to harm Asian Americans in another space.

Can you tell me about your work in Systematic Theology at Fordham and what might be next for you in your journey?

I am looking at how certain doctrines such as providence and eschatology have been used in colonial and imperial and civilizing projects. It’s a way to talk about the Philippines and think about Pilipino and Pilipino American history with a theological lens. It’s a very exciting time because many folks in my generation whose family immigrated around the same time as mine have only entered academia in the last 15 or 20 years—even as recently as the last decade. There’s a tight community of theologians brewing and growing and we’re following on the heels of the Pilipino-American psychologists, sociologists and Asian American Studies scholars who have gone before us.

I see my doctoral studies and the opportunity to teach as a consistent through line of ministry to college age students and my journey as a campus minister. I know when theology makes my heart burn in the best sort of way and is always what I’m after in the classroom and in the projects that I take on. That’s what I hope to do when I get the chance to teach in the future—to help students learn theology that will matter for them and their communities and the world.