But that did not discourage them. Now, thanks in significant part to the work of the Forum on Religion and Ecology that they started 20 years ago this month, they have the satisfaction of seeing how much has changed. 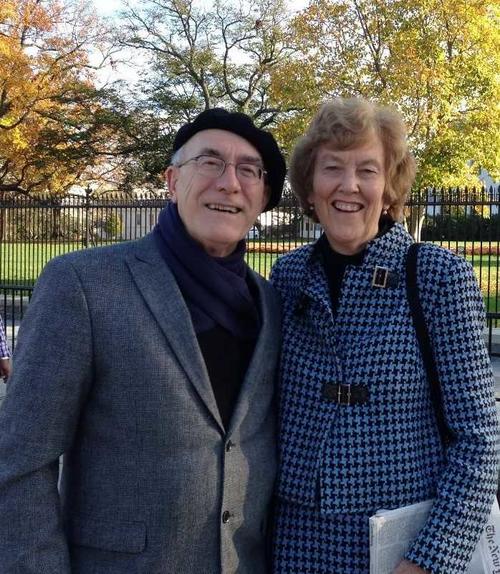 Today, there are academic positions in religion and ecology, and the number of courses offered on the topic has increased, including at Yale University. The Divinity School now has an M.A.R. on this topic, which includes courses such as the Doctrine of Creation and Christian Environmental Ethics. The network of scholars and environmentalists who Tucker and Grim involved when they started numbered about 800—but the Forum’s monthly newsletter now reaches over 12,000 people.

Looking back, Tucker and Grim can take pride in realizing that their work in collaboration with a growing body of academics, religious leaders, and activists has created a new field of study bridging religion and the environment—one that is now officially recognized by the American Academy of Religion.

“It takes time to get people on board,” Grim says. “But we have seen a deepening awareness of the ethical and spiritual aspects of environmental concerns.”

A married couple, Tucker and Grim are senior lecturers and research scholars with appointments in the Divinity School, the School of Forestry and Environmental Studies, and Religious Studies. The forum’s 20th anniversary is providing an occasion for amplifying their message that there are moral dimensions to the problems of climate change and environmental degradation, in addition to the more familiar dimensions such as science and policy.

For example, social and ecological justice are important concepts and are gaining recognition as such, as evidenced by Tucker’s and Grim’s membership on the advisory board of the ecology and justice series at Orbis Books for 20 years. As Grim observes, “Marginalized peoples are the most vulnerable to environmental problems, suffering from toxicity and pollution as we see in Flint Michigan or on many American Indian reservations.”

Both have spent their careers as religious scholars, Tucker specializing in Confucianism and Grim in Native American and indigenous religions. They share a decades-long interest in the environment and a deep regard for the work of Thomas Berry, a historian of religions whose books they have edited and whose biography they have written for Columbia University Press—a book to be published this spring.

Driving their work has been a crucial question, Tucker says: “How can we contribute to the growing global effort to address the environmental crisis? We are not scientists or policy people. But we do know something about what has been the missing link: the moral force of the world’s religions. When we started there were just a few theologians who recognized this as a problem, such as Joseph Sittler, John Cobb, Rosemary Ruether, and Sallie McFaugue. We have built on their work and broadened it to include the world’s religions.”

Tucker and Grim brought the Forum to Yale 13 years ago when the University hired them to teach in a joint master’s program with its Divinity and Forestry schools. The Forum as an international, multi-religion project has organized some 30 conferences, and Tucker and Grim have traveled to many parts of the world to speak on this topic including China, India, Korea, Indonesia, Iran, South Africa, and Latin America. They are currently giving lectures at the University of Oslo and will return for a symposium they have organized in Virginia on the “Living Earth Community.” This summer they will hold a conference in Morocco on the Abrahamic religions and ecology.

The Forum was launched at a day-long conference at the United Nations, which culminated a series of 10 conferences on religion and ecology that Tucker and Grim organized from 1996 to 1998 at Harvard’s Center for the Study of World Religions. The findings of those conferences were published in a 10-volume series, which showed ecological dimensions in texts, traditions, and practices of the world’s religions. Many have recognized the Harvard conferences and books as pathbreaking. “They helped to create a field within academia but also a force in the larger society,” Tucker says.

The Forum as public resource

A public face of the Forum is its website—a comprehensive resource that includes a listing of academic job openings and opportunities for students, a calendar of events around the country, links to news articles and other current publications, and videos. A section of the website is devoted to Laudato Si, the papal encyclical on the environment that Pope Francis issued in 2015. Tucker calls the encyclical an important development in getting more people engaged with environmental issues, especially because there are over two billion Christians in the world. Eco-justice is a centerpiece of this teaching document.

Another part of the Forum’s website is an overview of books and other published material on the environment-religion nexus—including Tucker’s and Grim’s own book, Ecology and Religion, published in 2014. The website also has sections devoted to 10 major world religions, along with indigenous traditions and interfaith efforts focused on the environment. Each section gives an annotated bibliography of books and scholarly articles.

The Forum is working to spread teaching of religion and ecology to colleges and high schools around the country. To help the effort, the website includes resource material for educators.

“Journey of the Universe”

Outreach is a crucial piece of Tucker’s and Grim’s work, and one of the most visible pieces of that effort is a multi-media project, “Journey of the Universe.” This consists of a film, a book, a series of conversations, and online classes. Released in 2011, the hour-long documentary traces the origin and development of the universe, the Earth and humans. The film was shown on PBS and won an Emmy

The film is a complement to but distinct from the Forum, Tucker says. “How do we involve more people in caring for environment? Religions are one huge doorway, but for many people it is the awe, wonder, and beauty of nature that speaks to them, and they are almost naturally environmentalists. There are many for whom science is the gateway. The film came out of a notion that we need a new story that brings science and the humanities together.”

Along with Brian Thomas Swimme, the film’s narrator and a professor at the California Institute of Integral Studies, Tucker wrote a book to accompany the movie that was published by Yale. She and Grim organized a series of conferences focused on “Journey of the Universe,” including one at Chautauqua that focused on the response of the world religions.

In addition, Tucker and Grim created three free online courses based on the “Journey of the Universe” that Yale offers through Coursera. Over 22,000 people have participated in the courses to date.

Extending the project’s reach even further, a content-rich “Journey of the Universe” website was updated in step with the Forum’s 20th anniversary this month. Devin O’Dea, a digital marketing consultant in San Francisco who led work on the site, says the time has never been more propitious for scholarly and popular exploration of religion and ecology.

Indeed, he notes that for his generation just turning thirty, “Journey of the Universe” and the Forum on Religion and Ecology provide sources of inspiration for the work still to be done for the flourishing of life systems for people and the planet.

Ken Byron is a freelance writer living in Connecticut with a special interest in academia and liberal arts education. Ken also had a lengthy career in newspaper journalism, including at the Hartford Courant. Follow Ken on Twitter at @kenbyron.