There have been a number of deaths of distinguished alumni/ae of YDS in the past few weeks. None of these people had a greater impact on YDS and theological education than George Lindbeck, who died on January 8th in Florida. 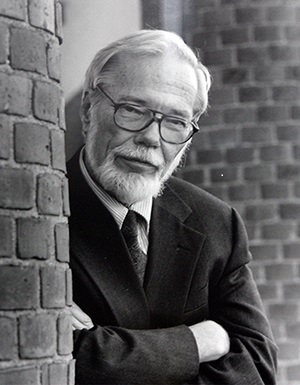 George was the son of Lutheran missionaries in China who spent the first seventeen years of his life in China and Korea. He was educated at Gustavus Adolphus College (B.A. in 1943) and Yale Divinity School (B.D. in 1946 and Ph.D. in 1955 [the Ph.D. program was located at the Divinity School at that time]). He was also trained at the University of Toronto and the University of Paris, where he went as a Fulbright Fellow. Trained as a medievalist, he wrote his dissertation on John Duns Scotus. As Professor Emeritus Harry Adams recalls, Lindbeck was widely regarded as “the brightest and best” of YDS students during the time he studied here.

Dr. Lindbeck spent his entire professional career at YDS. He began as an Instructor and Assistant Professor (1951-1962) and then made the giant leap to Associate Professor and Professor (1964-1993). I use the term “giant leap” because at that time there was no real tenure track at Yale. There were two categories of faculty: untenured assistant professors, who typically spent five to eight years at Yale and then went elsewhere; and the tenured faculty, who were generally hired from the outside–almost none came from within the first group. George was one of the few who made the transition from the first category to the second at Yale University.

As a scholar, George is remembered for two major contributions. In the broadest circles he is known for his work on Roman Catholicism and the Lutheran-Roman Catholic dialogue. Four of his books were devoted to this topic: Dialogue on the Way (edited volume, 1965), The Future of Roman Catholic Theology (1970), The Infallibility Debate (co-authored, 1971), and Infallibility (1972). He was a “Delegated Observer” from the Lutheran World Federation to the Second Vatican Council from 1962 to 1964.

The year that he did not serve on the YDS faculty (1962-1963) he was at the Second Vatican Council. He later served as a member of the international Lutheran/Roman Catholic Dialogue sponsored by the Lutheran World Federation and the Vatican Secretariat for Christian Unity (1968-1987) and was co-chairperson of the Lutheran delegation for more than ten years (1976-1987). He also served in the same capacity at the national level as a member of the official Lutheran/Roman Catholic Dialogue in the U.S. (1965-1989). When Catholicism opened up to the larger world, George Lindbeck was there to welcome and embrace Catholics, not only for the Lutheran Church but for YDS. His work made YDS a place where Roman Catholics could come—and indeed did come—following the Second Vatican Council.

“Throughout his life he sustained profound relationships among Protestant congregations, but also between Lutherans and Roman Catholics,”  remembers Margaret Farley, Professor Emerita of Christian Ethics at YDS. “He was able to cross what were for some scholars (and Christian believers) too high barriers in thought and action. A very gentle person, and a searcher of truth, he respected and even reverenced the faith and hope in all of the major Christian traditions. And his teaching was reflected in his similar respect and care for his students.”

The second area of Lindbeck’s work was postliberal theology. Perhaps his best known book is The Nature of Doctrine: Religion and Theology in a Postliberal Age (1984). He later published The Church in a Postliberal Age (2002). Harry Adams called the former “the most helpful of all the books we used to teach homiletics at YDS.”

Kris remembers him as “the kindest man and best listener I ever knew. He listened and asked questions in a way that taught me to think—and I’m sure that’s also true of the other students he taught.” A vigorous man who traveled widely and once summitted Mount Kilimanjaro, he loved hiking and walking near his retirement home in Vermont. He also continued his vocation: At eight-six, he finished his insightful introduction to the 2011 book Scripture, Creed, Theology: Lectures on the History of Christian Doctrine in the First Centuries by Robert L. Calhoun, his mentor at YDS.

A brain aneurism in 2009 hindered him greatly. But Kris says he would brighten during her frequent visits to the assisted living center in Florida where he spent his final years, where she would read him scripture and other Christian writings.

George was associated formally with YDS for a half a century (1943-1993), a true fixture at the school who embodied the ecumenism that is such a vital part of our ethos today. The quality of his scholarship and his dual commitment to the Academy and the Church made him an embodiment of what we represent. Every school needs iconic faculty who are revered by students and colleagues alike. George Lindbeck was one of those figures for YDS. There was a good reason why he received the 2004 Distinction in Theological Education Alumni Award.

We will remember him at Convocation this fall.

Greg Sterling is Dean of Yale Divinity School. This article is an adaptation of an email Sterling sent to the greater YDS community.