For more than a century, scholars of the Wisdom of Ben Sira have been staring at—and missing—a clue about the long-lost opening chapters of a historically crucial Hebrew version of this ancient text, which was first written in the second century BCE and has influenced Christian and Jewish teaching ever since. 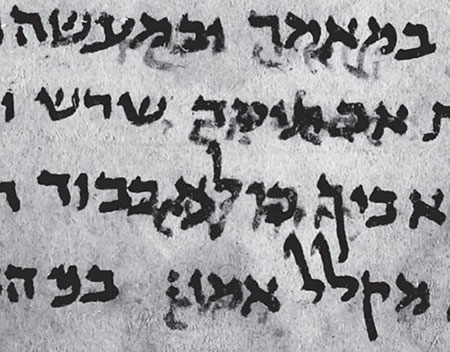 In a newly published article in the scholarly journal Revue de Qumran, Eric Reymond, lector in Hebrew at Yale Divinity School, has resolved some of the mystery around the missing chapters of the medieval Hebrew manuscript of Ben Sira in question—known by scholars as “Ms A” and discovered in 1896 at a Cairo synagogue.

Reymond has done so by making a connection between the lost first page of the manuscript and the strange ghosts of backwards letters that appear on the first of the surviving pages. He posits that the backwards letters are offsets or impressions of the missing text transmitted from the opposite, and long-missing, first folio page of this ancient manuscript.

“It’s a relief to finally know what those strange faint marks on the surviving text really are,” says Reymond, who exclaimed so loudly during his “aha” moment in his office that the professor next door could clearly hear it. “More important, this could give us an enhanced understanding of this foundational Hebrew text.”

A scholar of ancient Hebrew texts, Reymond has been noticing and puzzling over the faint traces of letters since he was in graduate school. Were they Arabic or some other language? Could they reveal something about Ben Sira’s text that was not known from the Greek or Syriac Aramaic translations? Could they help resolve which of those variant translations—the Greek or the Syriac—was closer to the original mark?

The discovery that the ghost letters are backwards Hebrew is important in and of itself. What adds even more value to his find is that it seems to indicate that the Hebrew of Ms A is, for the passage in question, closer to the Syriac translation than the Greek, which will help guide future research on the evolution of Ben Sira’s text. 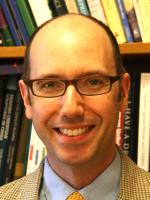 The similarity between the Hebrew and the Syriac is surprising since the Syriac translation for this passage includes later textual additions—additions that were not authored by Ben Sira himself. The finding illustrates clearly that although the Hebrew manuscripts do often seem to reflect the actual wording of Ben Sira’s original text, they (like the Greek and Syriac translations) were supplemented by ancient and medieval scribes who sought to introduce their own thoughts and theology into the ancient Hebrew work.

At the center of this literary detective story is the original text of Ben Sira, which has influenced both Jewish and Christian thought for millennia. This text, Reymond explains, is similar to the book of Proverbs in the Bible, “full of advice on how to live a righteous life, as well as hymns, praises, and poems.” Also known as Ecclesiasticus and Sirach, the Wisdom of Ben Sira, is part of the group of biblical-era books that form the Jewish Apocrypha or “Deuterocanonical Books.” Ben Sira, Reymond explains, is considered canonical by Catholics and Eastern Orthodox churches but not, generally speaking, by Protestant or Jewish congregations.

Scholarship around Ben Sira took a major leap forward in 1896 with the discovery in a Cairo synagogue of what were later proven to be authentic Ben Sira Hebrew manuscripts. Among them was so-called Ms A, which was hand-written by scribes around 1100 CE. Just one problem: The manuscript is missing its first folio page, which contains the first two chapters of the text and five verses of the third.

Has some of the missing page finally been discovered thanks to the realization that its letters rubbed off on a surviving page? Reymond is convinced the answer is “yes,” and he is excited by the new possibilities this creates for getting a better grasp of what those first chapters contained.

“This gives us a window on the Hebrew text as it was written in antiquity, and sheds light on the history of Ben Sira’s text,” Reymond says. “Because the material is secondary, made up of interpolated verses, it cannot reflect what Ben Sira wrote himself, but rather reflects the ideas of the scribes who read and copied his book in antiquity and in the middle ages.”

One portion of the missing text, constructed by Reymond through the use of the ghost letters and the Syriac translation, encourages the community to “love the fear of the lord and set your mind in it. Approach and do not tarry and you will find life for your spirit. … You will be like valiant people, you will be like heroes.”

The “life for your spirit” reference, Reymond notes, reflects an evolution in Jewish belief toward the concept of a soul that will live on in believers’ afterlife. This conception of the afterlife fits in with the theology of some Jewish groups contemporary with Ben Sira, including those who wrote some of the Dead Sea Scrolls. Verses touching on the immortality of the soul, therefore, could have been added to Ben Sira’s text relatively soon after the book’s completion.

A specialist in biblical and post-biblical Hebrew literature, Eric Reymond has been teaching Hebrew and pursuing his research at Yale Divinity School since 2010. Previously, he taught Aramaic and related languages and topics at the University of Michigan. Reymond is the author of three books: Innovations in Hebrew Poetry: Parallelism and the Poems of Sirach (Society of Biblical Literature, 2004), New Idioms within Old: Poetry and Parallelism in the Non-Masoretic Poems of 11Q5 (= 11QPsa) (SBL, 2011), and Qumran Hebrew: An Overview of Orthography, Phonology, and Morphology (SBL, 2014), as well as numerous scholarly articles.