The ‘hard-headed persistence of doing good’: An alum’s fight against rural poverty

By Kim A. Lawton

For Jason Coker ’01 M.A.R., the disgrace of persistent rural poverty in America is graphically illustrated by the boys’ restroom in the public school that Coker himself attended decades ago in the low-income, rural community of Shaw, Miss.

With little money in the budget for repairs, the school currently has just two working toilets for an entire wing of male students. 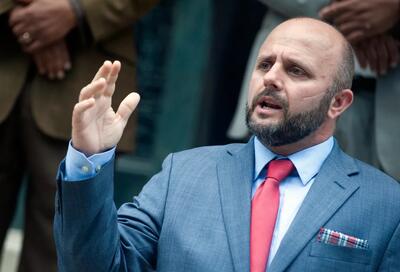 “What does that tell those kids?” Coker asks. “‘We don’t care about you. You’re not worth a pot to piss in.’ That’s what America tells its [poor] children.”

As president of the nonprofit rural development coalition Together for Hope, Coker has made it his mission to change that narrative.

“As a moral agent, I cannot stand by and think that’s OK,” he asserts. “We are all children of God, and as Dr. King says…if something happens to one person directly, it happens to all of us indirectly.”

The U.S. Department of Agriculture has identified 339 rural counties—more than 10 percent of all counties in the United States—where at least 20 percent of the population has lived below the federal poverty line for the past 30 years or more. And the COVID-19 pandemic has only exacerbated the problem.

“The past decade has been devastating for rural America,” Coker asserts. He knows this firsthand. He grew up in one of the poorest areas of the Mississippi Delta. “Rural poverty’s not something I read about. It’s something I know,” he says.

Together for Hope seeks to reimagine the most effective ways to address persistent rural poverty. The group works in five key regions: Appalachia, the so-called Black Belt region from Virginia to Alabama, the Delta, the Rio Grande Valley, and Native Lands. The organization takes what it describes as an “assets-focused and holistic approach.”

Coker says that all too often well-meaning organizations go into rural communities and ask about their pressing needs. The resulting lists are long.

“It’s demoralizing,” Coker says. “When you lead with a needs assessment, everybody’s overwhelmed, and they don’t even know where to start.”

Instead, Together for Hope, based in Jackson, Miss., urges community leaders to map out their existing assets. “Every time we’ve ever done it, they look up and say, ‘We have a lot more than we thought we did,’” he claims, calling the exercise “a powerful reframe.” 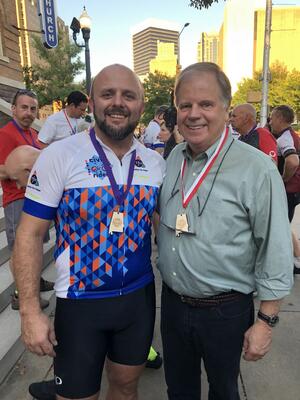 Together for Hope then  works with communities to leverage those assets, and to identify gaps in four priority areas (what they call their Four Priorities of Hope): education, health and nutrition, housing and environment, and social enterprise.

The group seeks to build a national coalition of local nonprofits, each dedicated to the specific strengths and needs in their particular region. For some regions, that means after-school tutoring programs or house-building and repair projects. For others, it translates into innovative social-enterprise projects such as an initiative in South Texas where entrepreneurs created pizza ovens to fit on the back of pickup trucks to provide lunch to field laborers.

Together for Hope offers resources such as national and local capacity training, as well as professional networking, or as Coker calls it, “connecting grassroots and grass tops.” The organization also engages in political advocacy including campaigns to increase SNAP benefits and reform public education.

Coker asserts that poverty is “a modern civil rights issue” in America. “People who live in the United States should not suffer under conditions where they are simply trying to survive.”

The issue of persistent rural poverty is deeply personal for Coker. “Growing up poor in the Mississippi Delta has always been a defining part of my life,” he admits. “My grandparents were sharecroppers. My grandmother was illiterate.”

Coker’s parents were factory workers, and he says he became a laborer at an early age. “Fields and factories, building houses, trimming trees, I worked I don’t know how many jobs,” he says.

Coker attended junior college on a carpentry scholarship. But while there, he felt a calling to become a pastor. He went to William Carey College (now University), a Southern Baptist-affiliated school in Mississippi.

He especially loved his Greek classes and decided he wanted to become a Bible translator. When he asked his advisor about the best schools for studying biblical languages, he  expected the answer to be one of two well-known Southern Baptist seminaries. His advisor instead told him about YDS.

He says he looked it up online in his school’s computer lab and saw that YDS offered classes in languages he had never heard of. He applied, got accepted, and moved from Mississippi to New Haven in 1998. 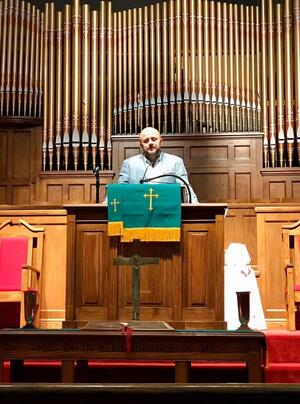 The next day, Coker was having lunch with some other students when one asked, “Can you believe how much they’re paying us on these work-study jobs?” Coker was about to voice his elation when she continued, “How do they expect us to live on only $7.25 an hour?” Right then, Coker says, he realized, “OK, it’s different up here.”

From studying concepts such as Liberation Theology to meeting people from all over the world and seeing the kind of wealth he had never imagined, Coker says Yale “was revolutionary” for him. After earning his M.A.R. at YDS, he stayed in the Northeast and went on to get a Ph.D. at Drew University.

While he was in New Haven, Coker worked at The  Congregational Church of New Canaan, which he describes as “the wealthiest place I’d ever seen.” He encouraged the church to take a mission trip to the Mississippi Delta region where he grew up.

Kelly Morrissey, Managing Director of the YDS Center for Continuing Education, was also working at the church and went on the trip.

“What the trip reinforced is that there is an unbelievable disparity in resources in this country,” Morrissey says. “Areas like the Mississippi Delta are at an economic, technological and nutritional disadvantage, and it has a generational impact.”

Coker eventually became lead pastor at Wilton Baptist Church in Wilton, Conn. But he continued his efforts in the Delta.

It was at this point that he got involved with Together for Hope, which at the time was a CBF initiative. He helped create Delta Hands for Hope, a nonprofit in his hometown of Shaw dedicated to empowering children and youth.

In 2016, CBF leaders asked Coker to consider moving back to Mississippi to head Together for Hope.

He  realized that addressing rural poverty was something he was uniquely qualified to do. “Coming from that lived experience and having gotten a world-class education at the highest level,” he says, “how do I use the body of knowledge that I have to build a coalition that’s going to make a difference?”

The work, Coker asserts, comes directly from his Christian beliefs. “This is what faith looks like,” he says. “This is my faith.”

Last year, Together for Hope became an independent nonprofit, although the organization retains close ties with the CBF.

Coker’s vision is to bring together partners and volunteers from many Christian denominations, and from other faith traditions as well. “They have some of the highest capacity to work for social transformation…and we want to work with them and build together,” he says.

Morrissey believes Coker’s work should inspire others to get involved. “It can be easy to turn a blind eye to the issues of poverty here, maybe because we don’t want to admit that it could happen in our own country,” she says. “We need people like Jason who remind us of the work there is to do and the role each of us can play in breaking the cycle of poverty.”

Coker can point to situations where individual lives have been changed, but he wants Together for Hope to develop programs that will be able to quantitatively measure the impact of the work. He knows it is a long-term process.

“We’ll know for sure in 10 years if what we’re doing now has made a difference,” he says. “What we’re trying to do is set up a process and a system so that maybe my kids, when they’re my age, will see a radically different place.”

What it will take, he asserts, is the “hard-headed persistence of doing good.” He adds: “That’s our commitment, because people have been hard-headed for doing bad for way too long, and nobody’s done anything about it.”

Kim Lawton is an award-winning reporter, producer, and writer who has worked in broadcast, print and online media. Lawton is also a Journalist Fellow with the University of Southern California’s Center For Religion and Civic Culture. For nearly 20 years, Lawton was Managing Editor and Correspondent for the highly acclaimed national public television program “Religion & Ethics NewsWeekly.”