YDS Dean Greg Sterling made the following announcement today to the YDS community.

Dear Colleagues,
I am very pleased to announce that Molly Zahn, a scholar of the Hebrew Bible and early Judaism who is currently at the University of Kansas, will join our faculty next year as a tenured Associate Professor of Hebrew Bible. Also coming to Yale will be her husband, Peter Grund, a linguist who will have a joint appointment as Senior Lecturer and Research Scholar in the English Department of the Faculty of Arts and Sciences and at YDS. 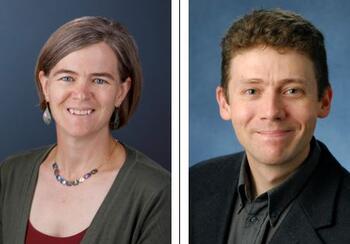 Molly Zahn has published widely on the intersections between composition, transmission, interpretation, and authority in early Jewish texts, especially the Dead Sea Scrolls. She is the author of Rethinking Rewritten Scripture (Brill, 2011) and Genres of Rewriting in Second Temple Judaism (Cambridge, 2020), and she currently serves as executive editor of the international Qumran journal Dead Sea Discoveries. She is currently working on a commentary on the Temple Scroll for the Hermeneia Series. She has also published two co-edited books, a dozen scholarly articles, and numerous articles in edited volumes and handbooks as well as reviews. She is widely considered to be one of the world’s leading experts on the Dead Sea Scrolls.
A University of Minnesota graduate, Professor Zahn has an M.Phil. in Old Testament theology from Oxford and a Ph.D. in Christianity and Judaism in Antiquity from Notre Dame. She has served on the KU faculty since 2008, moving through the faculty ranks as a lecturer (2008–2010), an assistant professor (2010–2016), an associate professor (2016–2021), and professor (2021–present).
Originally from Sweden, Peter Grund has served on the KU faculty since 2008, earning promotion to associate professor in 2014 and to full professor in 2021. The holder of a Ph.D. from the University of Uppsala, he studies the connection between language and sociocultural context in historical periods. He is the author of The Sociopragmatics of Stance: Community, Language, and the Witness Depositions from the Salem Witch Trials (John Benjamins, 2021). In addition, he has published dozens of edited volumes, journal articles, and chapters. He will offer a course at YDS on English and Social Justice as well as courses for the English Department. At KU, he was an award-winning pedagogue, earning three major awards during his tenure.
I look forward with great anticipation to the arrival of Molly and Peter and the contributions they will make. Please join me in welcoming them to YDS!
With my best wishes,
Greg Sterling
December 22, 2021