HomeNews & MediaNewsInclusion & exclusion in the New Testament and beyond: An interview with Prof. Yii-Jan Lin

Inclusion & exclusion in the New Testament and beyond: An interview with Prof. Yii-Jan Lin

As a Chinese American child of immigrants, Assistant Professor of New Testament Yii-Jan Lin ’14 Ph.D. had always been somewhat aware of how one’s personal context shapes one’s understanding of texts. This awareness, however, was cast into sharp relief when, in graduate school, she received a poor grade from a professor who assumed, just by looking at her name, that she was incapable of doing well in the class. Lin has written widely about the influence that concepts of race and ethnicity have on reading and interpretation practices. Her book The Erotic Life of Manuscripts (Oxford 2016) examines how metaphors of race, family, evolution, and genetic inheritance have shaped the goals and assumptions of New Testament textual criticism from the eighteenth century to the present. Her forthcoming book, Immigration and Apocalypse: The Revelation of John in the History of American Immigration, focuses on apocalypticism and the use of Revelation in the political discourse surrounding American immigration.

I corresponded with her about the challenges and joys of working as an Asian American scholar within the theological academy, how personal contexts inform a scholar’s reading and interpretation, and the importance of finding and cultivating communities that provide nourishment and support. The interview has been edited for length and clarity.

Leah Silvieus: When did questions of race, ethnicity, and immigration begin to intersect with your theological studies? Could you tell me about the times when these intersections were particularly vivid for you? 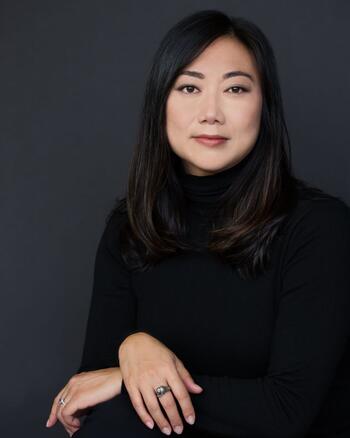 Yii-Jan Lin: This is a difficult question to answer. On the one hand, I’ve always been me: a child of immigrants and a minoritized ethnicity/race in America, my birthplace and home. Whatever I thought or produced in terms of theology and hermeneutics was always already shaped by my context. On the other hand, consciousness of my particular racialized identity that intersected with intentional and explicit discussion of this in my studies did not come until I was pursuing my second M.A. (the first was in English literature) in New Testament.

I vividly remember getting a paper back from a professor—this was in a large, hundred-student lecture on systematic theology. I looked through the paper and saw zero edits/commentary throughout, but the comment written on the very back of the paper made me ill: “As English is your second language, please have someone look through your paper for language difficulties.” I realized that the professor and teaching assistant responsible for grading my paper had only read one thing: my full name at the top and nothing else. From my name they had assumed that I was “foreign” and, therefore, could not express myself clearly or earn an A. This was a lesson in textual interpretation I have kept with me over the years. It is a lesson of how personal contexts shape readings in even—or especially—the moments when we are supposed to be the most “objective” (e.g. grading, “exegesis not eisegesis”), and how racialization creeps into these moments.

LS: You teach a course at YDS entitled “ ‘Race’ and the New Testament.” Can you tell me why “Race” is in quotations in the title, and why understanding concepts of race/ethnicity and racial/ethnic theory and minoritized hermeneutics, as you put it in your course description, is important to study of the New Testament?

YL: “Race” is in quotations because the course does not presume that “race” itself is a thing, unconstructed and “out there” waiting for us to discover it. We begin together—and I think of the course as a group enterprise—by considering different definitions of race and ethnicity and how these are constructed. The first half of the course surveys early Christian writings, along with Greco-Roman and Jewish texts, to see how our working constructions of race/ethnicity might or might not function in ancient contexts. The second half of the course is a bit more “meta”—we discuss New Testament and early Christian scholarship that foregrounds race/ethnicity in hermeneutics, and we also consider how such interpretations are minoritized in the field of biblical studies. This second part makes clear that there is no “neutral” scholarship; that is, there is no scholarship that is without context, whether social, cultural, or racial, etc. This is incredibly important because it dismantles the privilege afforded to certain types of scholarship deemed “neutral” or “foundational.”

LS: In light of your scholarship, can you talk about the importance of examining New Testament reading and interpretation practices—not only for academics, but also for those who seek to understand how the New Testament informs their faith practices and lived experiences?

YL: I think the books of the New Testament are greater than their texts. For example, the Book of Revelation has become a thing—socially, culturally, in the imagination of peoples of faith, in popular culture, etc.—that is much greater than the words printed under the heading “The Revelation of John.” This greater phenomenon impacts discourses about faith, the Bible, and their role in community practices, in legal disputes, in political rhetoric, and so on.

The metaphors and symbols of the books of the New Testament, writ large in social/cultural imagination, definitely impact how we think about race and ethnicity, even if at first it seems they contain no direct teaching or instruction about such things. Revelation doesn’t seem at first to have anything to say about race—until you start to understand it as a narrative about inclusion and exclusion. The New Jerusalem is a city with walls, albeit with open gates, but there are definite insiders (clothed in white robes, washed clean) and outsiders (murderers, dogs, the filthy). When the United States is understood as the New Jerusalem, even symbolically, a rhetoric of insiders/outsiders creeps very easily into discourses of immigration and white supremacy. Leaders who want to identify certain racial/ethnic groups as threats immediately take up language that echoes Revelation 22:15: “Outside are the dogs and sorcerers and fornicators and murderers and idolaters.”

LS: You have participated in a number of fellowships, trainings, and workshops that deal with the intersections of race/ethnicity and theological scholarship. These include teaching and learning workshops at the Wabash Center, participation in the Asian Theological Summer Institute, and membership in the Ethnic Chinese Biblical Colloquium [ECBC]. How have these experiences shaped your work?

YL: The [Wabash Teaching and Learning Workshop for Early Career Religion Faculty of Asian and Pacific Islander Descent] gathered together a group of fourteen early-career faculty and four senior faculty mentors, all of Asian/Pacific Islander descent, to meet three times over the period of a year—it was a fantastic experience. It created a safe space with a basic foundation of shared experiences in the academy, and it felt like a gathering of extended family. Together we brainstormed, strategized, and met individually with mentors to tackle issues we face in our institutions, our pedagogy, and the larger academy. These include outside assumptions about our status as the “model minority,” our invisibility or hypervisibility in the academy and our separate guilds, and thinking creatively about transforming our pedagogy and institutions as spaces against racism and white supremacy. Since the workshop, the women of the group—both early-career and mentoring faculty—have formed a Wabash peer-mentoring group and received a grant to pursue a project on “Cultivating Joy as Power and Resistance.” I can’t express how moving and sustaining meeting with these sisters (alas, virtually) has been, to share how we’re doing in teaching and research and in the rest of our lives.

I first attended an ECBC gathering right around the time I got that graded paper back with that awful comment written on it. Before the meeting, I had never met a single Asian senior faculty member in theology or biblical studies—or the humanities. I didn’t know they existed! Suddenly I saw people I would normally call “uncle” and “auntie”—but they were professors and scholars of the New Testament and Hebrew Bible. It blew my mind.

These trainings and meetings and groups form a network that is absolutely necessary for survival in the academy. We are each other’s family. We boost each other’s work in different forums, we learn from our elders, we swap strategies, we form alliances with other minoritized groups, and we help include young scholars in the community. It is my home and shelter in the academy.

Leah Silvieus is a poet and writer working at the intersection of religion and literature. Most recently, she is the co-editor with Lee Herrick of the anthology The World I Leave You: Asian American Poets on Faith and Spirit (Orison Books).