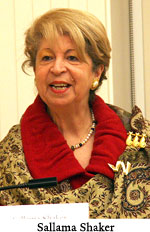 When the International Association of Religion Journalists (IARJ) was launched earlier this year, its mission was clear: to begin a conversation among journalists across the globe about how religion journalism can employ accurate and balanced reporting to foster understanding.

On Nov. 15, students and faculty at Yale Divinity School had the opportunity to join this conversation when members of the IARJ steering committee visited to take part in the panel discussion “Faith Across Oceans: Leading International Journalists Talk about the Religion Beat.”

Nayan Chanda, director of publications and editor of YaleGlobal Online Magazine at the Yale Center for the Study of Globalization, was joined by Rachael Kohn, producer and presenter of “The Spirit of Things,” Australia’s leading interview-based program on religion; Pedro Brieger, a journalist and sociologist based in Argentina who currently hosts a TV show on international politics; and David Briggs ’85 M.A.R., an American journalist with over 25 years of both national and international experience, including 10 years working as religion writer for The Associated Press. The panel was moderated by YDS Visiting Professor of Middle East and Islamic studies Sallama Shaker. 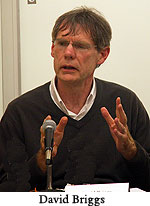 Briggs, who serves as executive director of the IARJ steering committee, describes the organization as a place where journalists can come together to understand religious issues around the world. He began the discussion by commenting on why the value of understanding cannot be underestimated, saying, “Now is the time for the type of knowledgeable, on-the-ground reporting that … places in context the actions of small groups of radicals and the public and private lives of people of faith throughout the world.” 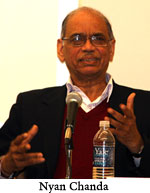 He added, “There is a real opportunity here. Journalists face some of the same issues all over and anything that increases religious understanding leads to a more civil society…Even the smallest act of understanding can make a difference in the world.”

Shaker noted that many people fail to recognize the role the media can play in ending prejudice. She called events like the “Faith Across Oceans” panel important, noting, “We need to bring positive awareness about the role of the media.” She invited panelists to discuss the ways in which creating a community of religion writers can strengthen religion journalism as a whole.

“This organization is important because so much of journalism displays only a shallow understanding of religion,” Rachael Kohn observed, adding, “[Journalists] must serve the interests of truth and fairness. We must foster the awareness of other traditions.” 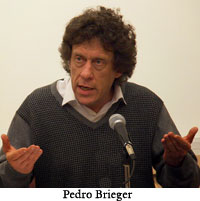 Kohn, who serves as vice-chair of the steering committee, emphasized that the work of religion journalists must be motivated by the needs of their own communities. Even as the IARJ has cultivated a sense of global unity, Kohn explained that her ultimate goal as a journalist remains rooted in the needs of her community.

“You don’t want to distort the nature of your own community,” she said. “It’s important to think about reporting for a group.”

Her sentiments were echoed by the other panelists, who each explained the unique needs of their audience and described the religious and political climate of their country.

Brieger, one of Argentina’s most popular television personalities and author of the books Holy War or Political Struggle? and What is Al Qaeda?, spoke passionately about some of the difficulties specific to religion reporting—such as the multiple definitions of the term “jihad”— and the need for journalists to convey a nuanced view of their subject matter. 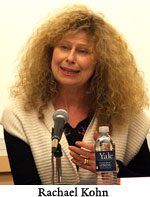 Briggs views the IARJ as a place where community needs can be met with global support. The organization, which had hoped for 100 members by the end of this year, by Nov. 15 already boasted 420 participants from over 90 nations.

Briggs stressed that, as the IARJ grows, it will continue to emphasize building understanding between its writers and with groups like the YDS academic community.

“I hope I leave you with the sense that we’re on this journey together,” he said. “We need to build conversations and to work together on this journey wherever it takes us.”

Click here to view a video of the entire discussion.