By Dean Greg Sterling
James M. Gustafson ‘55 Ph.D., Professor of Christian Ethics at Yale and YDS from 1955 to 1972 (and subsequently at the University of Chicago and Emory University), died earlier this month at the age of 95. His impact on his field and his students will long be felt. 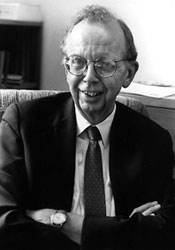 To his students—including Stanley Hauerwas ’65 B.D., who went on to become a pre-eminent ethicist himself—Professor Gustafson was a practitioner of “tough gentleness,” as Hauerwas once put it.
Gustafson’s YDS colleague David Kelsey ’58 B.D. elaborates:
“James Gustafson was a hard-headed realist about how complex most important ethical questions are. He pushed back against vague and over-simplified rhetorical gestures toward ill-defined abstractions … and rejected efforts to solve ethical dilemmas by appealing primarily to one’s ‘feelings’ rather than to critical analysis and careful reasoning. At the same time, he did so in ways that didn’t just shut students down but rather drew them out and engaged them. He implicitly refused to ‘solve’ any student’s ethical quandaries; but he helped them more clearly and carefully come to terms with them for themselves.”
His fellow ethicist and YDS faculty member Margaret Farley describes Gustafson as a model teacher. “He listened to his students,” Professor Farley remembers. “He had many different kinds of students; he was open, and they were open. That is what works, especially in the field of ethics.”
A lengthier remembrance by Professor Farley is included below.
Gustafson’s scholarship was as impressive as his teaching. Among his books were Christ and the Moral Life (1968); Can Ethics Be Christian? (1975), Protestant and Roman Catholic Ethics: Prospects for Rapprochement (1978), and Ethics from a Theocentric Perspective (1981, 1984). As stated by Douglas Ottati of Davidson College in a message to the late professor’s son, “Gustafson did more than any other thinker of his generation in America to shape Christian ethics as a scholarly field that also never loses touch with the practical life of faith.” The Society of Christian Ethics recognized Gustafson’s singular contribution by naming him the inaugural recipient of its Lifetime Achievement Award.
Rapid advancements in science, technology, ethics, and culture made Gustafson’s work especially salient, notes Boston College ethics Professor Lisa Cahill in a remembrance sent to the Gustafson family. “He cautioned against undue trust in the benign effects of scientific progress,” she recalls, “while in turn subjecting religious claims to the tests of experience, history, and science. He taught dozens of students who carried similar approaches into the next generation of religiously grounded ethical scholarship.”
Remembering theological ethicist James M. Gustafson: Read the article at the Emory University News Center
James Gustafson was preceded in death by his wife, Louise Roos Gustafson. He is survived by four children, all in the Albuquerque, New Mexico, area, and six grandchildren. The family asks that memorials be directed to the Roadrunner Food Bank in Albuquerque. Because of the pandemic, no memorial plans have been made.
We send our condolences to the Gustafson family, and to the many students and colleagues of James Gustafson who feel his loss deeply.
***
James Gustafson: A remembrance by Margaret Farley
James Gustafson was at the forefront of the growth of almost every form of ethical theory and practice that burgeoned in the Sixties. His legacy lives on in his countless former students and colleagues, as well as in the great diversity that marks his written work.
He never formed what could be called a “school” of his own, nor did he wish to. He was unique in the wide range of his interests and concerns, as well as in his “student-centric” approach to teaching.
Moreover, Gustafson’s ethical interests dug deeply into fields of theology, philosophy, science, anthropology, medicine, religion—all that pertained to humans, to the universe, to God.  He also had a kind of ecumenical spirit—in many forms.
In all of his searches, he found what he called “participation,” and in this he focused on relationships. His innovative method always contained his own experience. In Gustafson’s worldview, there is life and activity. “Something is going on,” he says. At the heart of what is going on are interrelated and interdependent beings and activities. Others have also found participation, but Gustafson’s direct mode of access to its meaning is ever new.
His last written work was an essay on “A Religious World” that brought together much of his focus on “participation.” In Gustafson’s worldview, there is life and activity, teeming in every aspect of “reality”—in God, between God and all other realities. What is going on in creation is the participation of creation and interdependent beings interrelated and interdependent activities. His is a way of “seeing” and “feeling,” in every aspect of “reality,” in God, between God and all other realities.
He will not soon be forgotten.
Margaret A. Farley
Gilbert L. Stark Professor Emerita of Christian Ethics
January 29, 2021