After nearly a decade of what she calls “old-fashioned archival research,” Professor Janet Ruffing has finished editing a volume of the correspondence between married mystic Elisabeth Leseur and nursing sister Marie Goby. It was an archival adventure of sorts, punctuated with unlikely events and uncanny encounters. Just this summer, Du Cerf, the Dominican Press in France, published her selection of letters from this extraordinary “epistolary soul-friendship.” 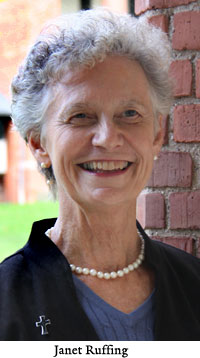 For Ruffing, a Sister of Mercy and professor in the practice of spirituality and ministerial leadership at Yale Divinity School, the publication of Lettres sur la soufrance: Correspondence avec soeur Marie Goby (1910-1914) is not only a professional accomplishment, but a personal achievement. “Rarely,” Ruffing said, “do you get to collaborate like this, with family members, publishers, researchers, transcribers, and archivists.”

Leseur, born an aristocrat and a contemporary of Therese of Lisieux, is well known for having lived a life of faith despite her marriage to one of the leaders of the atheist movement in Fin de siècle Paris, and the pain of breast cancer that ultimately killed her. “She was moving in high society,” Ruffing noted, “and found herself called to witness to unbelievers.”

Leseur’s personal diary, writings on Christian vocation, letters to unbelievers, and letters on suffering were widely circulated after her death in 1914. In her own lifetime, because of her husband’s career as a journalist and ambassador, the two traveled and toured extensively. On one of their many travels, they visited the Hôtel-Dieu, where Leseur came to know one of the nuns, Sister Marie Goby.

Although they met only three times during their four-year correspondence, Goby and Leseur exchanged many letters. According to Ruffing, “they had no one with whom to share the prayerful aspects of their lives. Both write some about their relationships and daily life, but mostly their spirituality.”

“It was so mutual, spiritual direction doesn’t explain the mutuality,” Ruffing observes, arguing instead that only “soul friendship” can describe their relationship, which was much more than a nun counseling a laywoman or a married mystic providing emotional support for a cloistered sister.

Ruffing concedes that “letters between friends are quite common, especially in religious life,” but she considers the correspondence of these women to be as significant as that of Francis de Sales with Jane de Chantal or Catherine of Siena with Raymond of Capua. The depth of their exchange is why she devoted years to researching, translating, transcribing, and editing despite having already published a volume on Leseur in 2005 for the Paulist Press’s Classics of Western Spirituality series.

“I can remember starting my graduate studies on Julian of Norwich,” Professor Ruffing mused, “I ran into my professor in the library, and he laughed when he found me by the card catalogue, saying, ‘Research is frequently not a logical process.’ None of this was logical.”

By illogical, Ruffing means that her journeys were not always as she planned. But with the hospitality, logistical assistance, and linguistic skills of her brother and sister-in-law, who were living in France during the years of her research, Ruffing was able to retrace Leseur’s life in Paris and track down Goby’s home and parish church in the village of Beaune. Her brother Kenneth located relevant newspaper archives, while her sister-in-law Lorraine helped scour them for mentions of Goby’s hospital during World War I.

Having family in France was only one of many instances of fortuitousness that led that led to the publication of Lettres sur la soufrance: Correspondence avec soeur Marie Goby (1910-1914). The 34 boxes of Leseur papers are preserved only because Elisabeth’s witness ultimately converted her husband, Felix, who not only abandoned his atheism but became a Dominican priest. While the details of Goby’s nursing career are chronicled only because a medical historian wrote a history of the Hôtel-Dieu that would not exist if the hospital were not one of the oldest in France.

“It was an adventure,” Ruffing said, excited that because of her efforts the letters between Leseur and Goby will be read by a new generation.