John Collins on apocalypse, biblical values, and the academic path

John J. Collins is the Holmes Professor of Old Testament Criticism and Interpretation at Yale Divinity School and the author of a new book on Jewish apocalyptic literature. We sat down with Prof. Collins to discuss his book, his popular course on biblical values, and other related topics.

You have a new book on Jewish apocalyptic literature, Apocalypse, Prophecy, and Pseudepigraphy. One issue you deal with in the book is what your publisher, Eerdmans, calls “the troubling ethical issues raised by apocalyptic texts.” What are one or two of those issues and what’s troubling about them?

Apocalypses typically expect a divine intervention and a decisive judgment, in which God will destroy 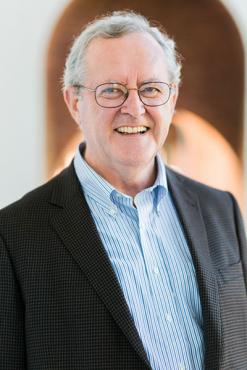 the “bad people.” This way of thinking is dualistic in an over-simplified way, and it often encourages intolerance. That, I think, is the biggest problem with it. Also the violence of the judgment can be troubling. The violence is fantasized, and it can be a way of letting off steam without resorting to actual violence. But there is always a danger of slippage—thinking that if God is going to kill bad people, perhaps we should give him a helping hand.

As your title makes clear, you’re also very interested in false ascriptions of authorship. How big a problem is this in the literature and why does it matter?

Pseudepigraphy isn’t really a big problem in this literature. It is a literary convention. The question is, why do people choose to write in the name of Enoch, or some other person who could not possibly have written the text in question? It is a way of bringing ideas we associate with that person to bear on the text.

I would distinguish between pseudepigraphy, as a literary convention, and forgery, as a calculated attempt to deceive. The lines do get blurred, however. If the intention behind pseudepigraphy is to pass something off as an inspired writing, that can be a problem.

At YDS, you teach a course on biblical values that is one of the most popular on the Quad. What’s it like to be a student in that class and why do you think so many people want to enroll?

The purpose of that class is to get people to think critically about the Bible, as it applies to several issues that are controversial in our time. Students like to have the chance to talk out the problems. (There are always a few students who do not like to talk, and sometimes do not like to listen to other students talking!) So even though it is a big class, students do a lot of the talking. I am not trying to tell them what is right and wrong, but to help them think through the issues.

Broadening our view, we see this notion of biblical values being brought up time and time again in politics and public debates. Do you think these popular and political invocations do justice to that term, “biblical values”?

The main reason I decided to start teaching this course is that “biblical values” get abused so often in political discourse. A lot of what people think are biblical values are not in the Bible at all. For example, the Bible says absolutely nothing about abortion. Only a few verses address homosexuality. Huge sections of the Bible (the Prophets, the Gospels) do not address it at all. Neither does the Bible affirm a right to life. And so on.

Tell us about why you decided to become an academic and, more to the point, a professor of Old Testament?

Two of my siblings were teachers and the other married one. I was always going to be a teacher of some sort! I grew up in a little place in the country in County Tipperary. I got a scholarship to a boarding school, called Rockwell College, outside Cashel (also in Tipperary). It was run by the Holy Ghost Fathers, and I joined the order after high school. I was in the order for nine years.

I stumbled into the Old Testament. I had studied Classics in high school, and wanted to continue with that in the university. But I was in a seminary, and the director told me, “You can do Classics if you also do Hebrew. Then you can teach scripture.” The Hebrew professor turned out to be much more engaging than the Classics professors!

Why do you think this ancient text, the Old Testament, written many thousands of years ago for people whose lives were so very different from ours today, continues to fascinate and fuel debate?

It is largely because people are taught to think of it as sacred, so they expect it to be relevant. But also, most of the Bible deals with very concrete, down-to-earth situations. It is not abstract or theoretical. It is easy to engage with.

For more on John Collins, visit his faculty biography page.