He’s no longer alone. González is considered a Cuban-American patriarch who inspired new generations of Latino and Latina scholars to enter theological education and change the way the Christian story is told and perceived.

Over a span of 50 years as a church historian, he has helped inject a more global view into Christian thought, broadened the mainstream conversation, and shaken the complacency of traditional faith narratives. 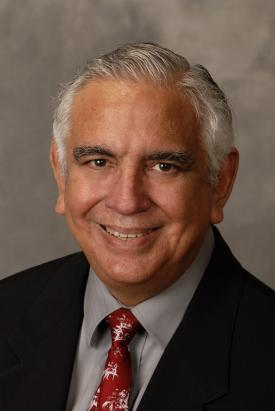 “Latino/Latina voices have brought unique viewpoints to theological and biblical reading,” González says. “All of us are not all these things, but most of us have been most of these things—marginalized, poor, exiled, or seen as foreigners. And when you start looking at scripture or theology or church practice from such points of view, they suggest a new, powerful idea: People on the margins are empowered to proclaim the gospel.”

He has had a hand in founding three pivotal organizations over the years—the Hispanic Theological Initiative, the Hispanic Summer Program, and Asociación para la Educación Teológica Hispana (or AETH). He is the author of many books, including A History of Christian Thought (three volumes), The Story of Christianity (two volumes), Santa Biblia: The Bible Through Hispanic Eyes, The Story Luke Tells, Essential Theological Terms, and Mañana: Christian Theology from a Hispanic Perspective.

At 78, after a long career as a theologian, writer, and ordained United Methodist minister, González has allegedly passed retirement age—but he continues to promote Latina/o theological education and mentoring. By now, Latino/Latina scholars constitute about 4 percent of the total at member institutions of the Association of Theological Schools.

Last fall, the Latina/o Religion, Culture, and Society Group and the La Comunidad of Hispanic Scholars of Religion met at the AAR in Atlanta to honor González for his life’s work in shaping “Latina/o biblical hermeneutics, constructive theology, inter-religious dialog and mission histories, and the formation of Latino/a serving organizations in theological education.” In 2014 he was awarded the Distinguished Service Medal by the ATS.

On April 22 at YDS, he will be a keynote speaker at  a Hispanic theology conference entitled “The Grass is Brown on this Side of the Fence: Reading the Bible from Our Own Perspective.”

“Theology has changed enormously these past decades,” González says. “I think the most important change is the recognition of its contextual nature. When you read or write theology, you bring your own perspective. And this has enriched our understanding greatly. We’ve come to realize how culture affects the way we read. So for instance when I started reading Patristics, I brought new questions to these early writers—what is the best use of wealth? How do we regard the poor? I found all sorts of counsel there on questions we don’t customarily ask.”

He has tried to cover neglected historical themes of Christian theology, sometimes despite publisher resistance.

“Writing books, what surprised me in my research was how much was left out of the conventional histories—the church in China and India, details of Portuguese and Spanish colonialism in the western hemisphere. Those things were neglected—very interesting!”

González grew up in Havana as a Methodist—a small Protestant minority within the island’s pre-revolutionary Catholic culture. Even as a boy, this minority identity shaped his approach to religious questions, pushing him to work harder to understand and defend his Protestant beliefs.

He looked to scriptural authority in order to answer the arguments of his non-Protestant schoolmates. He looked to European history in order to grasp the origins of the Reformation. His experience also gave him a strong Anabaptist sort of instinct for disciplined Christian community that defines itself against the larger society or “Christendom.”

And when he came to the U.S. for graduate school at YDS in the mid 1950s, he discovered he was an outsider once more—now an ethnic minority—who experienced prejudice against people of color, American-style.

“Thus my experience of being a minority in the ethnic sense opened my eyes and ears to the oppression that is very much a part of our society, and to hear the voice of the oppressed who are crying out, often in the name of Christianity,” he writes in Mañana: Christian Theology from a Hispanic Perspective, published by Abington in 1990.

During González’s Yale years, the Cuban revolution convulsed his nation and made it impossible to return home and freely depart again. When he graduated, he joined the faculty at the Evangelical Seminary of Puerto Rico. In 1969 he left for Atlanta to teach at the Candler School of Theology at Emory.

By 1977 he gave up fulltime teaching in order to lecture, write, and organize on behalf of Latina/o theological education.

“In the 70s there were so few of us that I was invited to speak almost every week somewhere—a school or denominational group—and so you could say I ‘retired’ from teaching fulltime long ago,” he says.

The writing, editing, and speaking continue. He is finishing a book called Our 95 Theses, which will gather Latina and Latino perspectives on next year’s 500th anniversary of the Reformation. He’ll be lecturing on the Reformation at Princeton Theological Seminary in the fall, focusing on Calvin’s identity as a French-born foreigner or exile in Geneva, where the reformer’s influence came into bloom.

Today, González notes, the church worldwide is growing, but trends in U.S., decades in the making, remain troubling.

“Much of the mainline here started losing touch with the grassroots, especially rural areas and poor people,” he says. “In the 60s there was a decisive move to suburbia, but that’s not where the people are. When I go to Latino churches—and I don’t mean the megachurches, I mean the smaller ones—I see energy. Things are moving.”

Justo González is buoyant about the future of Christian faith, even if he worries about spiritual signals in his adopted country in this election year.

“What worries me is the growth of a nationalist Christianity that’s a heresy. People are swayed by someone who comes along with showmanship. We have to distinguish between Christianity and nationalism. The church will find its way. I worry more about the nation than the church.”