According to civil rights lawyer, advocate, and legal scholar Michelle Alexander, most Americans are asleep to the deep-seated, systemic racism infused into America’s legal and penal system known as “mass incarceration.” “This system,” stated Alexander, “has decimated so many communities, destroyed so many families, and has literally turned back the clock on racial progress in the United States.” At the behest of what she described as “the Spirit whispering in my ear,” Alexander now works to wake Americans, including people of faith, out of their lethargic snoring into a full-scale movement that embraces—not ignores—people who are labeled “criminals.” 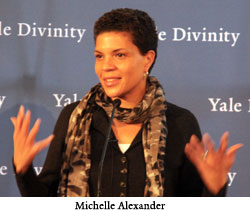 Alexander spoke to the YDS community as part of All School Conference, an annual week in the spring semester where the YDS community joins together to attend lectures, participate in discussions, and communally explore a particular issue, question, or idea. This year’s Conference focused on the racism of mass incarceration as explained in Alexander’s stirring book The New Jim Crow: Mass Incarceration in the Age of Colorblindness (The New Press, 2010), which all members of YDS received in Fall 2012.

Within the YDS community, awareness of mass incarceration emerged out of popular course from the Spring 2012 semester, “Jesus and Paul On Poverty and Economic Justice,” which engaged the gospels and epistles to critically address contemporary poverty.

As their final project, four students in the class last spring—Marilyn Kendrix ’13 M.Div., Tyrone McGowan ’13 M.Div., Herron Gaston ’14 M.Div., and Willie Barnes ’12 M.Div.—researched the relationship between incarceration and racism. In the process, Kendrix came across The New Jim Crow. Marilyn describes reading the book as a “life-changing” event. Her passion for spreading awareness about the crisis of mass incarnation sparked an idea: why not have the entire YDS community read the book, invite Alexander to speak at the beginning of the week, and then, for the remainder of the week, host a series of intentional discussions that would “allow the community to engage in discussions around mass incarceration with more depth and understanding than would have otherwise been possible.”

From February 25 to March 1, Kendrix’s idea became a reality, thanks to a collaborative effort by the Community Life Committee, Book Project Committee, and Diversity Committee, as well as Student Council.

The weeklong undertaking began with Alexander’s lecture on Monday, February 25. Before Alexander’s address—which drew a crowd of more than 600 people from across the Yale and New Haven community—YDS students had the opportunity to ask Alexander questions in casual Q&A session.

Questions ranged from signs of hope in the struggle for racial equality to the role of education in ending mass incarceration. Several questions addressed the particular role of people of faith in changing “hearts and minds” to end mass incarceration. “We’re going to have to inspire people to care about the ‘least of these,’” answered Alexander, “there’s no way around it.” 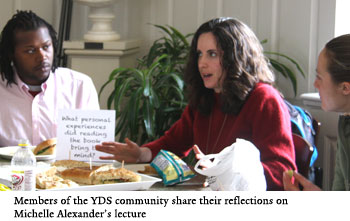 In her lecture that followed, now available online in its entirety, Alexander underscored how America’s criminal justice system functions more like a caste system than one of crime prevention and control. Noting that the prison population has quintupled in the last three decades—from 300,000 to well-over 2 million today—Alexander pointed out that almost half a million of these prisoners are black, despite the fact that African Americans make up less than 13 percent of the national population.

The result, she explains, is the intensely disproportionate mass incarceration of African Americans and a continuation of the nation’s brutal history of ‘legally’ controlling black people, first using slavery, then using Jim Crow, and now using mass incarceration—what she calls “the new Jim Crow.”

Furthermore, Alexander highlighted the staggering challenges faced by formerly incarcerated people when they try to re-enter a society “that had never shown much use for them in the first place.” Permanently labeled with “ex-convict” status, explains Alexander, these people are legally subject to old forms of discrimination and restricted from mainstream forms of employment, housing, and educational opportunity and many of them end up back in prison.

In her address, Alexander noted that it was fitting to have this dialogue in the midst of Black History Month, especially since this year marks the 150th anniversary of the Emancipation Proclamation and the 50th anniversary of the March on Washington and Martin Luther King’s infamous ‘I Have A Dream’ speech. Reflecting on this occasion, Alexander bid listeners to ask, “What could [MLK’s] Dream possibly mean for the 65 million people who now have criminal records, who have been branded ‘criminals,’ and who have been stripped of the very rights that were supposedly ‘won’ in the civil rights movements?”

For many members of the YDS community, the scale and depth of injustice that Alexander identified was shocking. Fortunately, in the words of Marilyn Kendrix, “The events of the rest of the week served to allow the community to engage in discussions around mass incarceration with more depth and understanding than would have otherwise been possible.”

Throughout the rest of the week, members of the YDS community were able to continue processing Alexander’s words by participating in guided lunchtime discussions, documentary screenings, and an all-school community dinner with a time for open-mike reflection.

“Reading The New Jim Crow was an unsettling experience,” reflected Elaine Ellis Thomas ’13 M.Div., “and having time to discuss the contents with others who were just as horrified at the trampling of civil liberties of persons of color in this country helped not only to process the information but to galvanize us, as a community, into action.” Tyrone McGowan agreed, adding that Alexander’s work helped him reevaluate “the role of the black church in confronting these issues.”

Some classes, like Willis Jenkins’ course “Social Justice: Christian Ethics and Community Engagement,” directly integrated The New Jim Crow into the curriculum. Jordan Haynie ’13 M.Div., who is taking the course, said “The timing couldn’t have been better: the class read Alexander the week before she arrived and, following her lecture, we used our practicum sections to discuss what Christian values of love and justice have to say about the points she raised.”

Seeking to carrying this very discussion beyond YDS, Anne Thatcher, ’14 M.Div, has started an initiative to have students and friends send or give a copy of The New Jim Crow to their college or high school alma mater, book group, friends, or faith-community.

To win the battle against mass incarceration, Alexander insisted that people of faith must wake up to the realities of systemic racism in our country, but also “need to be willing to tell this truth in our churches and places of worship.”

Yet “consciousness raising” won’t be enough. “We’re going to have to be willing to get to work,” said Alexander, “And in my view that means being willing to build and underground railroad for people released from prison—an underground railroad for people who are trying to make a genuine break for real freedom…opening our homes, opening our hearts, opening our places of worship, opening our schools to people returning from prison who need help finding work, getting an education, finding housing, perhaps even getting access to food.”

This work of opening our hearts to formerly incarcerated people is “about cultivating genuine care, compassion, and concern for all of us,” said Alexander, “believing in the possibility of redemption, acting on genuine forgiveness, building a society that is rooted in fairness and compassion.”

Speaking on behalf of the entire YDS community, Dean Sterling eloquently followed Alexander’s lecture saying, “As those who profess allegiance to a crucified criminal, I hope that we will take this to heart.” If students did indeed take this to heart, then the seeds of a movement to end mass incarceration may have just been sown at YDS.

>To view the lecture given by Michelle Alexander in Marquand Chapel, click here.