Growing up in a small town, Ginger Gaines-Cirelli ’96 M.Div. saw the wounds caused by poverty and segregation. Growing up United Methodist, she saw the urgency of connecting personal piety and social action. 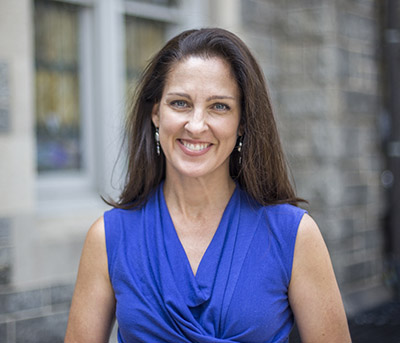 So when she hears the repeated refrain that Christian faith and social justice don’t mix, she’s not buying.

“We hear this in America—that you can’t be a Bible-believing Christian and be engaged in social justice—but my whole life is dedicated to responding to that,” she says.

Gaines-Cirelli is senior minister at a historic, high-profile congregation in the nation’s capital, Foundry United Methodist Church—the first woman to be senior pastor in the congregation’s 200-year history. Foundry is known as a progressive voice in the UMC, a church that “welcomes all, worships passionately, challenges the status quo, and seeks to transform the world through God’s love,” according to its website.

In her regular sermons and day-to-day work, Gaines-Cirelli issues her own challenges to the 21st century’s fears and complacencies. She declares the love of Jesus as a force for change and courage amid the messiness of life. She and her church are advocates for full LGBTQ inclusion. They are joining others to work to eradicate homelessness in Washington, D.C. They are hosting projects to confront the persistence of racial prejudice, including the blind spots of liberals who think they are enlightened already on race.

“All of us need to be involved in this discussion and awareness,” she says.

A particular theology of Jesus connects these many issues: He is “the one who came into the world to be like us so that we might be more like God.”

“People need to hear the story: there’s hope, and God is with us,” she says.

“Social justice comes out of scripture, and it’s right there in United Methodist tradition. I’ve said it from the pulpit that some things Jesus said are downright un-American. Not once did Jesus commit an act of violence. Not once. But we don’t want to hear it, because our culture is so caught up in values of the military-industrial complex.”

Gaines-Cirelli grew up in Kiefer, Okla., a small town near Tulsa, and studied religion as an undergraduate at Southwestern University in Georgetown, Texas. A mentor at college urged her to continue her theological probings—at Yale Divinity School. Unsure of her vocation, still in seeker mode, she applied to YDS and was accepted.

“I was delighted to discover I wasn’t the only one in that boat—not everyone had a sense of clarity. There was a lot of space in the Divinity School for exploration, and that was attractive.”

Soon enough, she noticed fellow students and others nudging her toward congregational ministry.

Her time at YDS was life-changing. She took liberation theology from the late Letty Russell. She met her future husband, Anthony Cirelli ’96 M.A.R.  who is now a Roman Catholic theologian working for the U.S. Conference of Catholic Bishops.

She also took a YDS-sponsored trip to southern India for two weeks that connected faith and life in ways she has never forgotten.

There she and other students met with liberation theologians and a variety of Christian groups who applied their faith in concrete ways, such as advocacy against domestic abuse and water-stealing.

“The trip was transformative at all sorts of levels,” she recalls. “It connected theological inquiry with how we live and how we shape community. It made us think about the question of how to live as Christians in an overwhelmingly non-Christian society. The answer we found was: We just do it as disciples of Jesus. Let that be a witness.”

Gaines-Cirelli had been a pastor at UMC churches in New York, Maryland, and D.C. before accepting the Foundry position last year. Leading a Washington congregation that is situated at the intersection of national politics, policy, and ideology, she gives a lot of thought to the role of public theology in American life and what it should look like. One ambition is to keep challenging a stubborn perception that “Christian” poses no threat to the political status quo.

“We’ve got to have a broader conversation about this inaccurate media perception of Christianity,” she says.

“It’s possible to stay grounded in scripture and be a progressive voice. The mistake is to put a finger on a particular verse and miss the larger threads of God’s saving grace for the world.”

Day by day, Ginger Gaines-Cirelli endeavors to expand that conversation and embody that grace. In late November, in a sermon entitled “Is Jesus a Bigot?” she meditated on a phrase of healing that Jesus used, “Ephphatha,” which in Aramaic means “be opened.” She said Jesus dared to become the fragile, marginalized “other,” inviting us to see him in others, even in the nervous 21st century, and be open to change.