In the summer of 1937 an associate of the German American Bund purchased 178 acres of land in the town of Southbury, CT. The Bund, German for “association,” claimed to promote American values in German American Youth. But the organization had a hidden message: to spread the Nazi philosophy of Adolf Hitler on United States soil.

Nine-year-old Lois Lindsay—now Lois Lindsay Brown, age 84—shouted these opening words to her younger sister when two tall men stepped out of a black Mercedes Benz and wanted to know where they could find her father, the Rev. M.E.N. Lindsay, a 1930 graduate of Yale Divinity School and the pastor of South Britain Congregational Church.

The Bund had already established more then 20 training camps across the country and the secluded town of Southbury, with its small population of 1,200, was next on their strategic list. 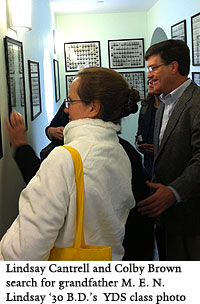 At least that was the plan until Rev. Lindsay, fellow YDS graduate Rev. Felix Manley of the Class of 1935, and the residents of Southbury sensed that something wasn’t right.  The year 2012 marks the 75th anniversary of this interesting year in the history of Southbury, and as part of the town’s commemoration a film was produced, “Home of the Brave: When Southbury Said No to the Nazis,” featuring the work of Lindsay, Manley, and others.

While the Bund worked to clear trees and stockpile food for the camp, Lindsay and other town officials scoured the pamphlets and news sources hoping to learn more about the organization. In 1937 many in the United States did not yet know the full weight of Hitler’s genocidal mission overseas.

These depression-era citizens had other concerns.

Lindsay’s research revealed unsettling findings: in order to be admitted to the Bund, people had to sign an oath that they were of Aryan descent and would follow the philosophy of Adolph Hitler. In the Bund camps, children learned how to march in formation, hunt, fish, and, of course, to Heil Hitler.

Detecting red flags, Lindsay made up his mind. On Sunday, Nov. 21, both he and Manley preached against the Bund; the sermons made front-page news the next day in the Waterbury papers.  “We could not be silent. There is no Bund camp,” he wrote in a letter to Yale Divinity School.

In his sermon, Lindsay called the movement an “insidious menace” that was “anti-Christian” and “anti-American.”

The town also mounted a legal challenge to the Nazi plans. Shortly after the suspicious visit by the men in the back Mercedes, Lindsay along with other town leaders organized a community meeting to discuss establishing a zoning commission in Southbury. They elected Lindsay to chair the meetings.

Because the meeting had been called only for the purposes of establishing a zoning commission, Rev. Lindsay stated that conversation would avoid all direct references to the Nazi movement.   The commission was established; the meeting was adjourned.  Immediately after, another meeting was opened, and the topic of the Bund camp was discussed at length.  Resolutions passed and people signed their names as opposing the Bund and its ideology of hate.

The subsequent draft of the new zoning policy, revealed strong sentiment against the actions of the Bund.

The new policy banned the use of land for “military training or drilling with or without arms except by the legally constituted armed forces of the United States of America.”

Following the zoning declaration, the German American Bund abandoned both the property as well as the town of Southbury, CT. Their exit, however, left a lasting impact on all who were involved.

While the small details are hard to remember, Brown, Lindsay’s daughter, can still recall many of the emotional memories of the event.

“I can remember being frightened by the whole thing,” she said during a Nov. 16 visit to YDS with her children Daphne Oakes, Lindsay Cantrell, and Colby Brown, all of whom live in Rocky Mount, VA.  “I was not at ease with this situation.”

Following the town’s decision, Lindsay received a letter from Nazi officials in Germany that promised that he and his family “would be remembered” when the party came to power in the United States. 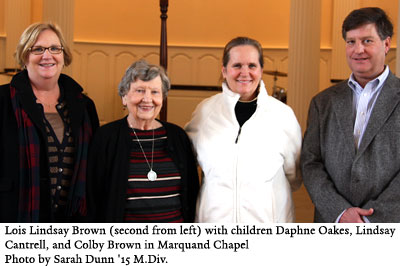 To mark the 75th anniversary of this historic event, Southbury’s religious and town leaders teamed up with the Southbury Historical Society to remember the occasion in a variety of ways, including coordination of the “Home of the Brave” documentary. Organizers premiered the film on Nov. 24 to a sold-out audience at Pomperaug High School. Demand was so high that Southbury Town Hall agreed to show two additional screenings the following Tuesday.

Rev. Shannon Rye Wall ‘08 M.Div., the current pastor of South Britain Congregational Church, was instrumental in organizing many of the festivities and gatherings.

“Before I came here I had no idea that this had happened,” she said. “I’m proud to be a part of this commemoration.”

Wall contacted Brown, who now lives in Virginia. “She tracked Momma down,” joked one of Brown’s daughters. ”We were surprised by all of the attention we got,” said Brown. “Eighty-four is a little late to be a movie star.”

Hollywood dreams aside, Brown, who knew her father as a “humble man,” wants everyone to know that “This was the work of the whole town, not just Daddy.”

Wall smiled at the comment. Southbury’s current population now well-exceeds the 1,200 residents who lived there in 1937. Nonetheless, Brown’s assessment of the town’s spirit remains accurate to this day.

Click here to view a trailer of the documentary “Home of the Brave: When Southbury Said No to the Nazis.”  DVDs of the entire film are available with a $25 donation to the Southbury Historical Society, Inc., P.O. Box 124, Southbury, CT 06488.  The film can also be viewed at YDS’s Ministry Resource Center.