Born and raised in Haiti, Jean-Fritz Guerrier ’18 M.Div. enjoyed a childhood surrounded by loved ones.

“A famous Haitian proverb says that your neighbors are your family,” he said. “Even distant cousins are considered close family and part of everyday life. It’s a nice way to grow up.” 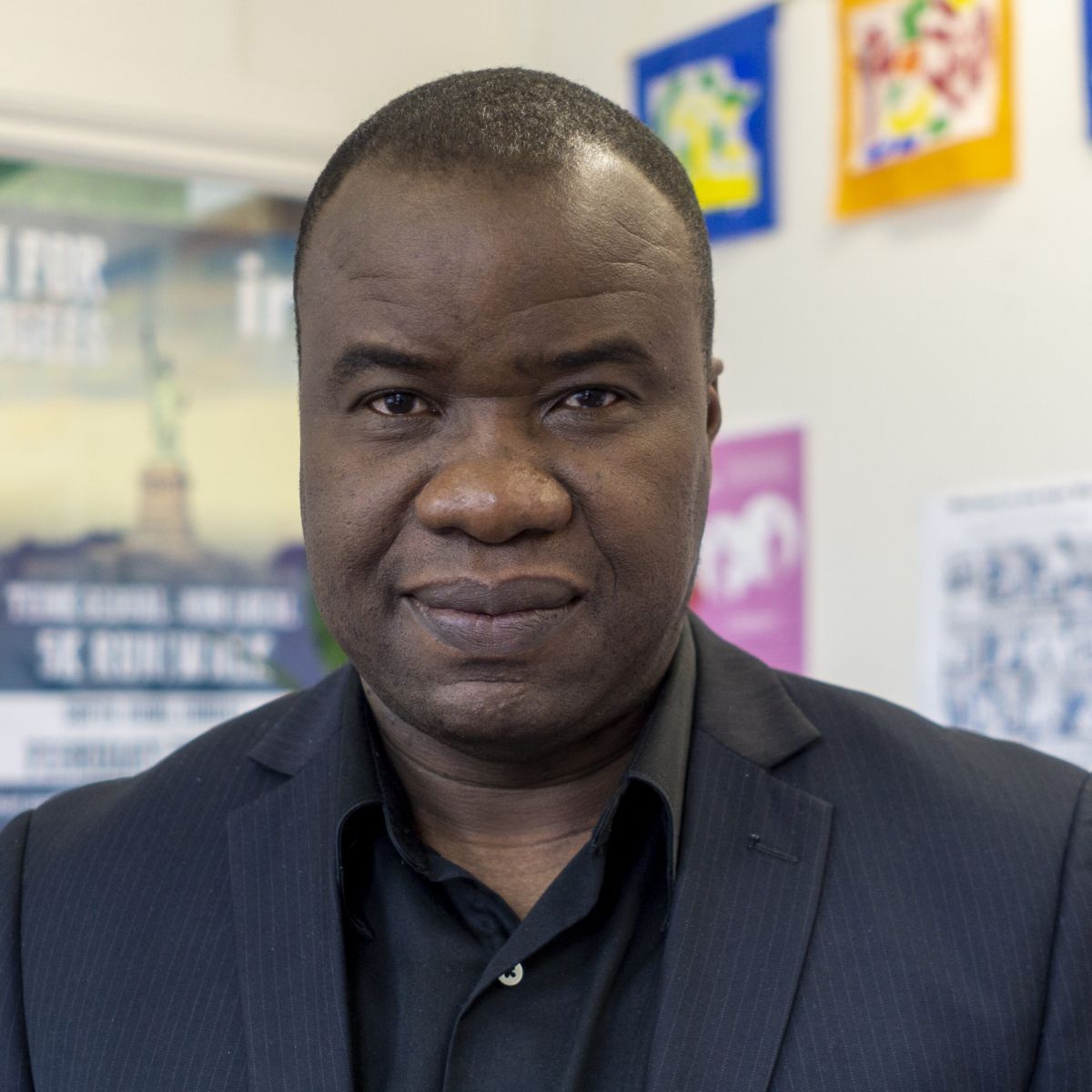 But life in the Caribbean has its challenges. Many family members must travel to the U.S. to work, including Guerrier’s father.

“At times, my father worked in manufacturing in Florida and was the pastor of a church there,” Guerrier said. “I missed him when he was gone, but I was surrounded by many other male relatives. Our house was filled with people coming and going.”

The ability to move between the secular work world and the pulpit must run in the family. Because Guerrier has made such moves, too—from banker to pastor and, most recently, an administrative leadership role with a refugee resettlement agency, the New Haven-based IRIS (Integrated Refugee & Immigrant Services).

Guerrier attended a private Catholic school and received his undergraduate degree in business at the University of Notre Dame satellite campus in his hometown city of Cap-Haitien. When it came time for graduate school, however, Guerrier opted for studies in the U.S, earning an M.B.A. from Southern Illinois University.

After receiving his business degree, Guerrier moved back to Haiti and held a position as the dean of business at a prestigious college. He describes the move as “a bit jarring.”

“After experiencing the individualistic nature of the U.S., I had some reverse culture shock,” he said. “I am now at the point where I live life in the in-between; no matter where I reside, I am in a liminal space and am often perceived as the ’other.’ However, my in-between-ness helps me deal with cultural and professional ambiguities more effectively.”

After a few years of working in Haiti, Guerrier returned to the U.S. again.

“At the time, both of my parents were living in Florida and getting older,” he said. “Additionally, the political system in Haiti was in upheaval, so it was the right thing to do.”

Guerrier moved to Fort Lauderdale to help his parents run their church while working full-time at JP Morgan.

“I worked for JP Morgan from 2009 to 2015,” he said. “My job was to bring balances to the bank, but it was right during the crash. It was a terrible time to be a banker. A lot of people would cry or yell at you. One day a man came into my office because he wanted to invest about a million dollars. He threatened to shoot himself if he lost any money. It was so awful.”

Guerrier realized that banking was not the path for him.

“I am a very creative person and like to come up with new ideas,” he said. “(In banking) there is some innovation, but it’s very limited. I also didn’t like the laser focus on money and the idea of a zero-sum game. I felt lost in such a big system.”

Life and leadership at YDS

His banking career behind him, Guerrier started YDS in 2015.

“When I arrived, I was pleased to see a number of second-career students like me,” he said. “Other factors helped contribute to the diversity I experienced, including the international students and variety of religious traditions."

Guerrier became the President of International Student Fellowship and the Coordinator of the Community Life Committee.

“I helped organize events for the YDS community and managed budgets for student groups,” he said. “Overall, the groups help emerging leaders create solutions to problems. Then when they graduate, they go on to transform the world.”

Guerrier talks a lot about creating “a new way of being church for the 21st century.” 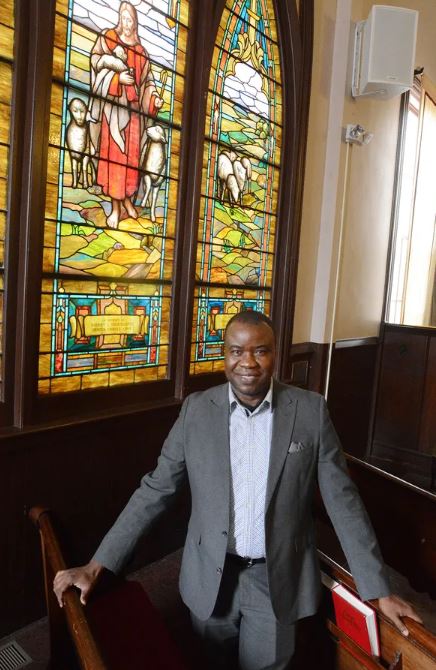 “Numerous churches are unable to afford full-time ministers and staff, while budgets for missionary work and community outreach shrink,” he said. “Buildings are crumbling and basic services are lacking. Consequently, congregations are not equipped to make the required strategic decisions to survive and thrive.”

One hallmark of Guerrier's pastoral career is his penchant for creating more diverse offerings.

“People come to church with different needs, tastes, and wants, and we can offer different programs for them,” he said. “A worship service may start with announcements, a song, a prayer, and a 20-minute sermon after which attendees will be invited to go to different venues,” he said. “Some may go to a prayer room or a Christian video games room, while others may attend a play or a session on sign language ministry.”

While some parishioners were originally hesitant about Guerrier’s changes, most embraced his ideas.

“It takes time to change a culture, especially one that has been engrained for a couple of centuries,” he said. “Churches have to understand that if they don’t change, they will die.”

Guerrier also calls on seminaries to update their curricula.

“Seminaries must provide their future ministers with the financial realities of running a church,” he said. “You want your students to understand modern marketing tools, strategic planning, and so on.”

'Business training for seminarians': Learn about partnership between Andover Newton at YDS and Yale's School of Management

“Every congregation will require different types of change,” he said. “Each has its own set of challenges.”

A new path to resilience

An example of Guerrier’s innovative pastoring is his creation of The Overcomer Hour. Started a few months after COVID hit, The Overcomer Hour is held over Zoom every Saturday evening and provides spiritual and emotional support through sharing, prayer, and music. It is also streamed on Facebook and shown on a community television station.

“The program started as a way to help people deal with the challenges of COVID,” Guerrier explained. “It is a unique ministry designed to create conversation around theology, social sciences, music, and prayer. I wanted to create something that felt more like a group therapy session and to touch upon various themes with guest experts.”

Though Guerrier took a group therapy class in the past, he wanted a professional therapist in the mix. He reached out to his friend Daniel Cohen. 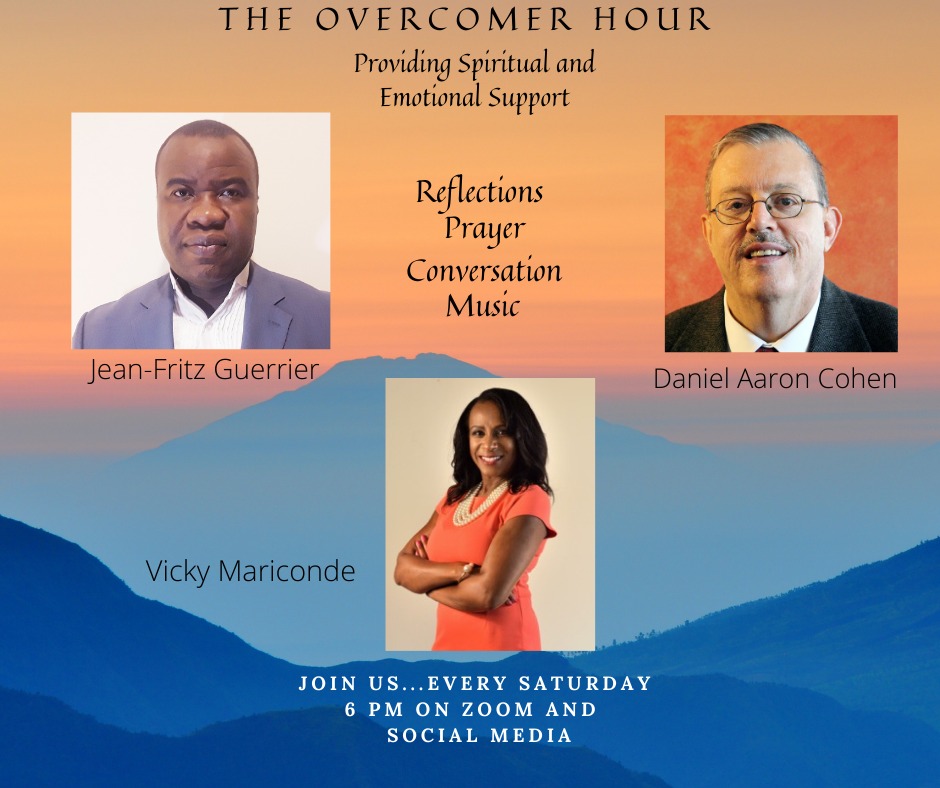 “Daniel agreed to tap into his experience as a social worker and therapist to talk about things like mental health and trauma,” Guerrier said. “He had also just written a book on humility, so I offered him to lead a five-minute weekly reflection on the importance of humility.”

Cohen enjoys his time on The Overcomer Hour.

“It’s a lot different than just a sermon,” Cohen said. “We focus on and discuss various issues. You don’t have to be a Christian to like it. So many of our guests are doing fascinating work.”

Guerrier also invited acclaimed vocalist Vicky Mariconde to be part of the program. Her performances of Christian contemporary music add an element of inspiration to the online gatherings.

“Our guests have included scholars, doctors, scientists, ministers, college administrators, nonprofit managers, and so forth,” Guerrier said. “I have received calls and emails from many people who say that participating in our meeting has been like a therapy session for them—just what I hoped for.”

Guerrier resides in a bustling home with his wife, Ange, and their three young daughters.

“We have three daughters under the age of five, so there’s never a dull moment,” Guerrier laughs.

Guerrier originally met Ange at his church in Haiti.

“She was a soloist in a big youth choir,” he said. “We started dating after I moved to the U.S. In Haiti, she was an infection control nurse in a large university hospital. We got married in 2013, and she moved to the US with me. She continues to work in the healthcare industry.”

The couple juggles their full-time jobs and caring for their daughters.

“They are the most beautiful girls,” Guerrier said. “They are smart and curious. I know that as Black girls, they will face a lot of challenges. My job is to prepare them for these challenges. I teach them to stand up, dust themselves off, and keep going. I think that’s what my parents did for me. They wanted me to get ready for a world that is far from ideal.”

The ministry of refugee resettlement

Recently, Guerrier started a new job as the first Director of Human Resources, Diversity, Equity, and Inclusion at IRIS, the New Haven-based refugee resettlement agency that helps refugees and immigrants integrate into their new communities. IRIS resettles 200 to 500 refugees each year. 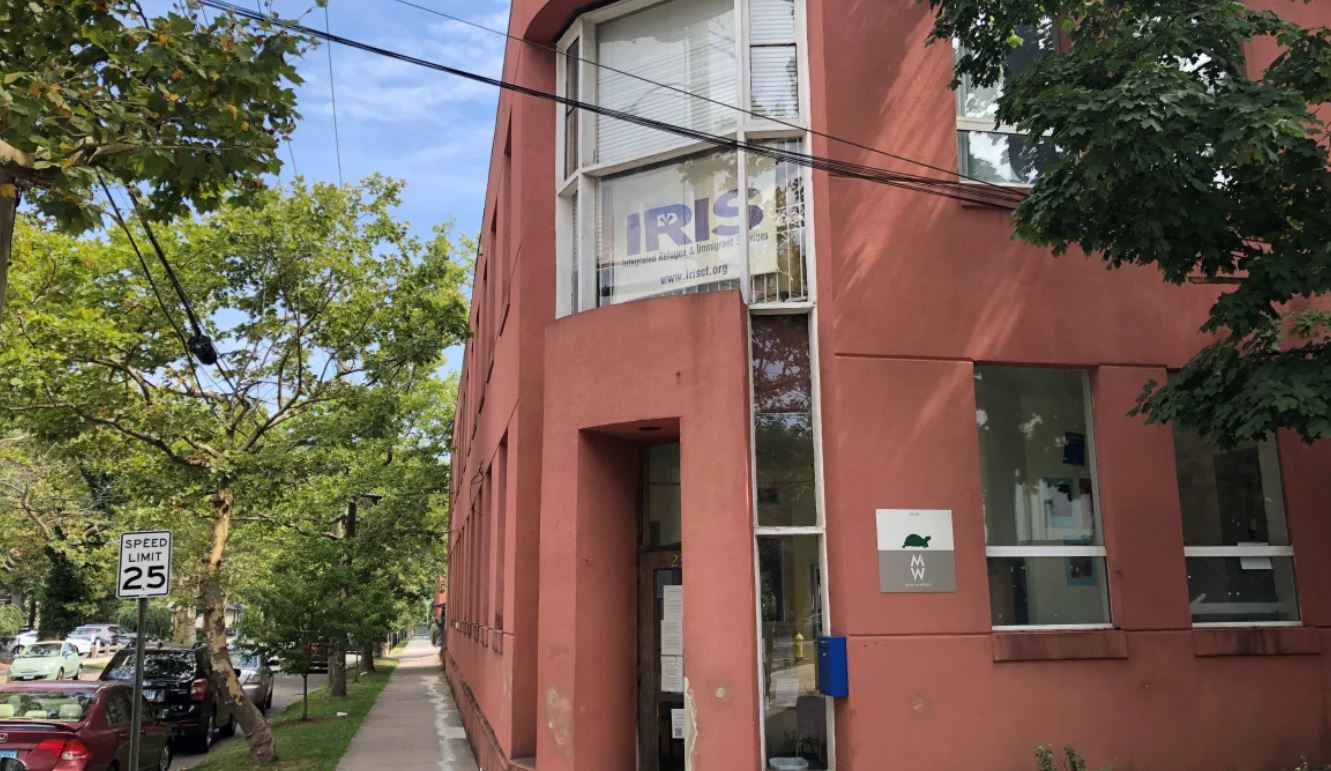 “As somebody who has had the immigrant experience, I feel like we are one world,” said Guerrier. “IRIS provides ways to bring these victims some form of justice. The day they arrive in New Haven, a case manager meets them with a culture-appropriate meal. As a minister, I deeply believe that this work is part of my ministry.”

The Executive Director of IRIS, Chris George, is excited to have Guerrier aboard.

“I like Jean-Fritz’s calm and quiet strength, along with his professional background," George said. "We wanted someone with real depth of experience and wisdom.”

“In everything I do, I feel like I am following my particular calling,” he said. “It can be chaotic, but it’s wonderful. When I look back on my life, I feel truly blessed. I just want to continue to serve people and be my best and most joyful self.”