At the urging of the YDS Alumni Board, the Divinity School introduced an element of oral history to last month’s Convocation and Reunions, offering women (and other) graduates the opportunity to share perspectives and stories from their time at YDS.

Informally titled “Story Corps” after the popular NPR program, the project used an online survey and on-camera interviews to capture graduates’ and other community members’ reflections and experiences around gender and inclusion. Fifteen alums video-recorded interviews, either individually or in small groups, and by early November another 83 had completed the questionnaire.

According to then-Alumni Relations Director Gail Briggs (who retired at the end of October), the project accomplished its goal of shedding light on “who we were, who we are, and who we aspire to be. We think that we are going to take a lot away from this.”

Debby Jagielow, who succeeded Briggs as Director of Alumni Relations and Annual Giving, adds that “it is educational and inspiring to hear the voices of seven decades of alumnae. We look forward to archiving these stories in the library and adding to them in with future reunion celebrations.” Jagielow encouraged alumnae to continue adding online submissions by completing the survey at this this web location. 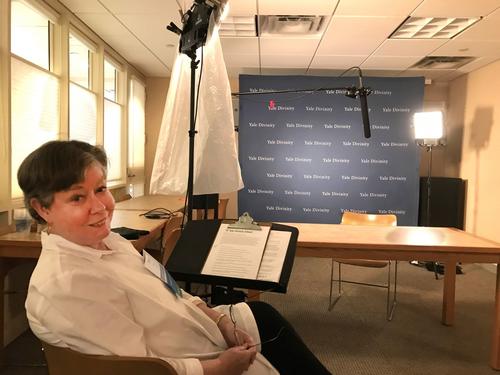 Interest in a Story Corps-style project began building last spring when Martha Smalley, former Special Collections Librarian and Curator of the Day Missions Collection at the Divinity Library, and Professor Carolyn Sharp ’94 M.A.R., ’00 Ph.D. visited the Alumni Board at its biannual meeting. As Smalley and Sharp described their work on the Divinity School’s participation in the 50WomenAtYale150 celebrations, the Board was inspired to launch a project to illuminate the experiences of women throughout YDS history.

The Board’s idea culminated in the interviews that took place at the Story Corps station set up in the Library during Convocation and Reunions. Alumni Board member Paige Smith ’76 M.Div. served as the interviewer for most of the sessions.

Here is a sampling of comments made in the recorded interviews, all of which are available on the YDS YouTube channel.

If you were planning for ordination, did your churches, at that time, ordain women, or was that a question for you?

Susan Thomas ’79 M.Div.: “I didn’t become Lutheran until after divinity school, and then was ordained there. But I remember, very distinctly, being on the steps behind the chapel here talking to another Lutheran male student who said, ‘But Jesus really didn’t have any female disciples.’ And I said, ‘Well, I know that that’s not the way Jesus intended things to be interpreted. And if he did, I don’t want any part of the church.’”

Do you think your time at YDS being in a minority affected your ministry?

Bonnie Scott ’69 M.A.R.: “I think being a minority as a woman here at Yale did affect my ministry…. When I went for ordination, there was a group of women who surrounded the church with picket signs saying, ‘Woman, put back on your apron.’ And I think it was that culture and environment that so many of us as women lived through, but we did it. We were pioneers, and it seems so strange today when we have 50% women now at Yale, and they don’t know how hard it was. But we do. We do. And I think that’s why I continued to work until just this year, and I’m 74 and a half, but I just didn’t want to stop.”

In her on-camera interview, Christine Janis ’96 M.Div., ’99 S.T.M. remembered, “[The women] were doing philanthropic works together and sharing ideas. The men needed to be discussing the fine points of theology. But the women were getting back to Isaiah 11 or Matthew and saying, ‘What is God commanding us to do?’ And the women were always gathering together and forming groups and helping people. That’s why I stay in New Haven.” 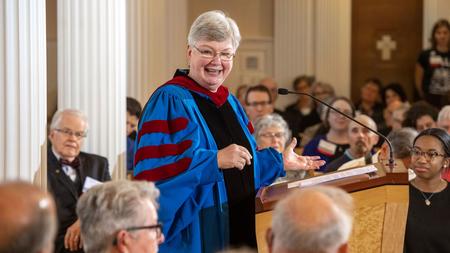 The men and women who attended YDS, Janis added, “have helped not only build their denominations but build the nation and the world.”

The 2019 iteration of Convocation and Reunions honored women’s voices and leadership in other ways, too. All three featured lectures—the Ensign Lecture, Kavanaugh Lecture, and Beecher Lectures—were delivered by women. All four alumni awards were presented to women, as were two special Dean’s awards for outstanding service.

Read about this year’s awards recipients.

The author of this article, Moriah Lee ‘20 M.A.R. is interested in the intersection of biblical studies and current theological structures within American evangelical Christianity. She writes as a freelance journalist for Business Insider, with work also appearing in the Chicago Tribune and the New York Daily News.