The first time Peter S. Hawkins studied Dante’s Divine Comedy as a student, it didn’t take. Soon he had a second opportunity—again, no impression. Then, as a Yale graduate student, the wary young Hawkins was persuaded to attend the Dante course led by renowned scholar John Freccero. And the beatific vision struck him.

“A fellow student had told me, ‘Let’s try this class, just once,’ ” recalls Hawkins, professor of religion and literature at YDS and the Institute of Sacred Music. “It turned out to be the rest of my life.”

By now, he has been sharing his passion for Dante’s magisterial medieval poem—the three-part Inferno, Purgatorio and Paradiso—with students for decades. This fall at YDS he is teaching his two-semester Divine Comedy course, “Dante’s Journey to God,” which continues through Spring 2013. He is exposing the epic work also to undergrads this semester in Yale College’s Directed Studies program. 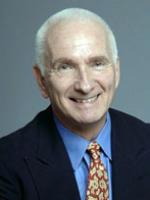 “People ask, ‘Aren’t you tired of it?’ Absolutely not!” he says. “It’s an endless discovery. And the discovery is not just the text; it’s whom I’m reading it with. The students are learning what an intricate work the Divine Comedy is. It’s a conversion story. It’s civilization’s most complicated rendering of moving from lost to found, culminating in a vision of God. In some sense, so many students are on that journey. I am too.”

Hawkins’s own academic journey included 24 years as a popular teacher at YDS (1976-2000) before moving to Boston University (2000-08) to head the Luce Program in Scripture and the Literary Arts. Hawkins fans were delighted at the news of his return to Sterling Divinity Quadrangle in fall 2008. His uniquely crafted YDS course offerings include “The Passion of Christ in Literature and the Visual Arts” and “Genesis and its Literary Afterlife.” In the spring he will teach “Psalms in Scripture, Literature, and Music” with Markus Rathey and Vicki Hoffer.

“Being away from Yale I missed a couple of things,” he says. “One is the theological context here. People disagree about everything, but there’s a common language, a sense of urgency about theological education, the sense that it really matters. And I missed chapel. And coming back I found it was so much richer than it was before. No matter what happens that day in worship (whether I like it or not), I step out of my preoccupations and join the company. I set my compass by worship.”

As his course titles make plain, Hawkins has long worked at the crossroads of faith and poetry, belief and art. It was in high school that the power of literature broadsided him: he discovered Gerard Manley Hopkins, T.S. Eliot, Flannery O’Connor and others who showed him how the life of faith is enlivened and refreshed by the struggles of poetic imagery and imagination.

“All of these writers are forever shaped by the biblical canon, but they do something new with it,” he says. “This is literature that takes religion very, very seriously. I see it as a secondary scripture. It’s a way of listening for God. People have their spirits quickened as often from outside the Bible as from inside it. I like going back and forth between the Bible and its literary afterlife.” (Among contemporary literary figures who embrace religious themes, he turns especially to John Updike, Marilynne Robinson, John Cheever, Bernard Malamud, Nathan Englander and poet Christian Wiman among others.)

Hawkins says he became “an adult Christian” at Union Theological Seminary, where he received an M.Div. in his early 20s. At that time he also got his first valuable lessons as a teacher: his experience as a first-grade instructor in the South Bronx has stayed with him.

“I learned so much from that. I discovered how important it is that every class should have a beginning, middle and end. Learn students’ first names, create a sense of community. The great moment is when the class is able to go on without you.”

As a teacher he remains committed to the spiritual wisdom of reading literature with concentration. His books include Dante’s Testaments: Essays on Scriptural Imagination, Dante: A Brief History, and Undiscovered Country: Imagining the World to Come. He is co-editor of the four-volume series Listening for God: Contemporary Literature and the Life of Faith.

“There’s so much emphasis in classrooms on reading a lot, but with literature you have to read slowly, closely,” he explains. “I like to spend a lot of time on a sentence, a metaphor, on how a poem can contain an infinity of meanings, on how creative language can articulate the mystery of God. I like being with students as they discover a valence of their own through the poetry and fiction.

“That’s a wonderful thing about literature: it slows a person down. It quiets me.”

Reading the entire Divine Comedy with students —some 14,000 lines—represents a pinnacle of a teacher’s vocation and mastery; it also offers, as Hawkins suggests, one of the soul’s great adventures. In his class he stresses the work as a theological poem, “taking full account of the poem as a path with a divine destination.” American readers have long had a special relationship to Dante, whose ambitious endeavor to describe the great journey of the afterlife has preoccupied American poets from the 19th century (Emerson, Longfellow,) through the 20th (Eliot, Pound, Pinsky, Merwin) and into the 21st.

“It’s a big story—reverent, irreverent, exhibiting a hunger to take on the world, ambitious enough to try to see the world as God sees it,” Hawkins says.

Never far from considerations of Dante is the theme of our life in God, the human endeavor to find wholeness in the summons of gospel and scripture. And so Hawkins’s thoughts turn easily again to worship.

“The experience of praise and lament in company does my soul good. I begin by praying that I won’t be mean and critical, which is a hazard of being a professional “religious person.” I pray to be surprised. I need to read scripture in company. I need the power of music, the presence of tradition that is very old yet made new in worship. Worship constitutes my Christian life. I need it.”