Since January, a photography exhibit titled “Seminary” has been on display in the Divinity School’s Sarah Smith Gallery. The show features the work of Gabrielle Muller ’20 M.A.R., who during her time as a student spent more than a year photographing members of the LGBTQ community at YDS. The exhibit description written by Muller and collaborators JaQuan Beachem ’21 M.Div. and Laura Snell ’21 M.A.R. calls the work an “unapologetic, joyful celebration of queer visibility in religious spaces.”
YDS sat down with Muller to discuss her exhibition. (See the photographs at gabriellemuller.com/seminary.)
What motivated you and your collaborators to create this exhibit? 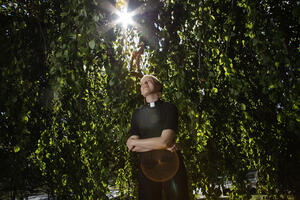 While taking photo courses at the School of Art, I began photographing my friends at YDS in the Spring of 2019. I was curious about the way photography and photographs function in communal spaces, and more specifically, the way photographs shape and preserve institutional narratives. I was also studying the way shame and guilt have operated as a means of establishing and consolidating power in theological claims about gender, sexuality, and otherness. I decided to build a project that challenged the prominence of the taken-for-granted current stories told by the photographs on the walls of YDS, by centering queer visibility.
***
Statement by co-curators JaQuan Beachem and Laura Snell:
“Seminary” is a photography exhibition that renders our queer community visible to the institutions that house us. This visibility brings to the forefront a dialogue of belonging for queer members, juxtaposed with the homogeneity of institutional portraiture, to exist authentically in space. Through this display, our queerness becomes not just visible, but integral to the narrative that religious spaces tell about themselves and the people that move within them. The exhibition displays glimpses into the integrity and dignity of those photographed while combating inclinations to shrink or question the divinity of queer bodies. This photo series invites the Yale Divinity School community to acknowledge the queer history of the Sterling Quadrangle and to see the fullness within our community and, therefore, the fullness of the Divine.
***
I began by working with my friends who were leading (the student organization) DivOut at the time. We talked about the project, and they worked with me to get the word out in order to organize photoshoots. Once space opened for an exhibit in the YDS Sarah Smith Gallery in early 2020, the show curators, Laura Snell and JaQuan Beachem, and I began to discuss and plan the specifics of the show.
What’s the story the exhibit tells? 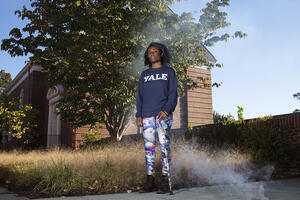 This project always had a performance element built in, as its fulfillment was in hanging the photographs on the walls of the school. I wanted this to open a space for an alternative, more authentic, visual narrative that includes and centers queer seminarians—one that is almost never explicitly told in religious spaces.
It’s been said that photography both conceals and reveals. Do you agree with that? How if at all was that a factor in the way you approached this work?
Photographs can provide a glimpse of reality, but they never give a full story. They are vulnerable to interpretation, intent, and bias. The stories they might tell are always contingent upon context. So yes, they have the ability to both reveal and conceal. This dual nature was a large motivating factor behind the incarnation of the project. Since I was examining the creation and preservation of communal narratives, I wanted to highlight concealments in institutional memory by bringing the focus onto seminarians who, despite continued accomplishments and gifts to the institution and church at large, have had parts of their identities diminished and/or erased by historical memory.
Among the responses you are hearing what stands out for you? 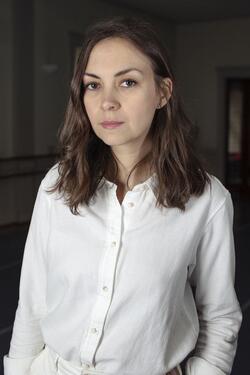 The responses that resonate with me most are from the people who took part in the project. People have shared various feelings with me, but the most common and prominent feedback has been an affirmative, positive reaction to a feeling of being seen and centered. This kind of response resonates with me because it speaks directly to my desire to create the project.
It’s unfortunate that foot traffic is much less than normal at YDS because of the pandemic and that fewer people are able to see the exhibit in person. What are some of the actions you and your team are taking to extend the reach and impact of the exhibit? How can people see the work if they cannot come to YDS?
Yes, it is unfortunate that more people cannot see the show in person, especially because its placement on the school walls is so inherently important to the project. That said, JaQuan, Laura, and I came up with some cool alternative ways to see and experience the work. First, we wanted a way to host a virtual version of the show. And secondly, we wanted to create another way to interact with it in material form. I called my friend, Mark Price, a super talented artist and designer, to see if he could help with the design of these elements. Mark designed mailable packets that include risograph zines and postcards with images from the show, and they are enclosed in semi-transparent envelopes. He also designed a digital catalogue in the form of a downloadable PDF with all of the images from the show, some extras that didn’t make it into the show, and some installation photos.
You graduated last May. What have you been doing since then (besides preparing the exhibition) and what’s your next move professionally?
In spite of graduating into the global pandemic last spring, my first feature film, Crossroads of America, was released. I also recently accepted an offer to the limited residency MFA in Photography program at Hartford Art School, where I am very excited to further develop my practice under the guidance of amazing artists and photographers all over the world. I am also planning my move back to the New York City area this summer.
For those with Quad access, “Seminary” will remain on display in the Sarah Smith Gallery through the remainder of the Spring 2021 semester. If you are unable to visit in person, view the exhibition online at gabriellemuller.com/seminary.
A time-lapse video of the exhibition installation
April 4, 2021