In a July 28 ceremony at the White House, President Barack Obama presented Krista Tippett ’94 M.Div. with a National Humanities Medal. 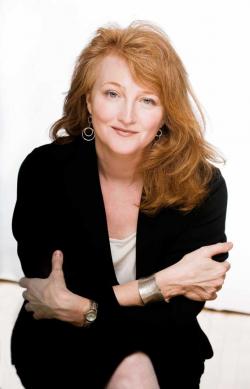 Tippett, host of the radio show OnBeing and New York Times best-selling author of Speaking of Faith (Viking Penguin, 2007) and Einstein’s God (Penguin, 2010), was recognized for “thoughtfully delving into the mysteries of human existence,” explained the National Endowment for the Humanities press release.

“On the air and in print, Ms. Tippett avoids easy answers, embracing complexity and inviting people of all faiths, no faith, and every background to join the conversation.”

Today, OnBeing is a Peabody award-winning radio show airing on more than 330 radio stations. Its website has won a Webby award and its podcast has a diverse, international following.

“Krista Tippett personifies Christian leadership in the public arena,” said Dean Gregory Sterling upon learning of the award. “OnBeing is one of the most important venues for the public discussion of faith today. We are honored to call Krista one of our own.”

In her National Endowment for the Humanities profile, Tippett explained that radio is particularly conducive to rich and nuanced conversations.

“There is an amazing intimacy about radio that lends itself to talking about intimate things, talking about spiritual things, or talking about what it means to be human,” she was quoted saying. “The medium of radio creates space for the spiritual and religious life, tapping into the reflective part of us.”

The National Humanities medal “honors individuals or groups whose work has deepened the nation’s understanding of the humanities, broadened our citizens’ engagement with the humanities, or helped preserve and expand Americans’ access to important resources in the humanities.” Previous recipients include Wendell Berry, Marilynne Robinson, Elie Wiesel, Mark Noll, Toni Morrison, and Steven Spielberg.

In 2008 Tippett returned to YDS to deliver the Francis X. Cheney Lecture at Convocation and Reunions, entitled “Religion, Media, and Public Life in the 21st Century.” In her lecture she identified the daily uses of her theological education at YDS.

“I was one of those people who came to divinity school not knowing what I would do with it,” explained Tippett in the lecture.

“But the truth is I can’t imagine that I would be using the theological education I got here any more in any other profession; I use it every day. And what’s been really thrilling is how the Christian foundation I got here—in thinking theologically, thinking about religious tradition, unlocking sacred texts—those have absolutely been keys to me as I have gone out to continue my conversation with people across the world’s religious traditions.”