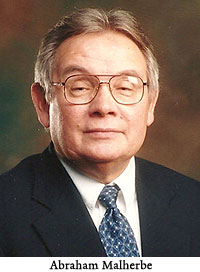 Malherbe was a prolific author and made major contributions in several areas. He is best known for his work in Hellenistic moral philosophy and early Christianity, especially the Pauline tradition. He made contributions both to Hellenistic moral philosophy and to the ways in which early Christians were influenced by it. His work on The Cynic Epistles: A Study Edition (1977) and Moral Exhortation: A Graeco-Roman Sourcebook (1986) made a number of important texts available to the wider range of scholars. His “Hellenistic Moralists and the New Testament” (ANRW) may hold the distinction for being the most cited forthcoming article in the history of New Testament studies. Both before and after its appearance, this article provided a framework for scholars to think about how to appropriate Hellenistic moral philosophy. Malherbe did this in detail in several of his own books, especially, Paul and the Thessalonians: The Philosophical Tradition of Pastoral Care (1987), Paul and the Popular Philosophers (1989), and his Anchor Bible Commentary, The Letters to the Thessalonians 2000). He was working on a commentary on the Pastorals for Hermeneia when he died.

Dean Gregory Sterling, who met Malherbe as a graduate student, said,  “Abe was, however, more than a scholar. He was a beloved teacher and mentor. His students have gone on to a wide range of successful careers. There are multiple scholarships in his name, a testimony to the personal friendships that many had with him. He was a self-confident man, but he had reasons to be self-confident.

“He did not lack opinions nor was he shy about expressing them: you knew what he thought and why he thought it. Yet he was also a generous person: he went to great lengths to assist students and colleagues.”

Malherbe and his wife, Phyllis, who made their home in Hamden, CT, dedicated a great deal of time and resources to support the Whitney Avenue Church of Christ in New Haven as well as a number of other churches in the area including the First Baptist Church in New Haven, which the Malherbes attended in recent years.

David Bartlett, the J. Edward and Ruth Cox Lantz Professor Emeritus of Christian Communication, said, “Abe Malherbe was the embodiment of an ancient ideal, the Christian scholar.  His scholarship is known by everyone who studies New Testament as he helped bring early Christian literature into conversation with the Hellenistic philosophical writings and helped us to think about the church in its social and intellectual context.  His Anchor Bible commentary on 1 & 2 Thessalonians will surely be the major resource for students and scholars for a very long time.

“At the same time he was deeply devoted to the life of the church.  Through the years I have been impressed by how many pastors remember Abe as a major influence on their calling and their careers.   He was also always active in the life of a local congregation, teaching church school, counseling pastors, and encouraging laypeople.

“It is impossible to overstate the impact that Abe Malherbe’s research, writing, and teaching had on the field of New Testament studies at Yale, in North America, and indeed throughout the world,” said Wayne Meeks, the Woolsey Professor Emeritus of Religious Studies.  “But for me that impact was deeply personal—and not only because he was a friend I treasured.  Speaking for the moment only professionally, I could not have done what I did, nor been who I was as a scholar, had it not been for Abe.  Our very different backgrounds, areas of special knowledge, and skills somehow dovetailed serendipitously into a shared way of asking new questions about early Christianity.  Abe, for me, defined what ‘colleague’ means.”

And Harry Adams, the Horace Bushnell Professor Emeritus of Christian Nurture, commented, “Abe Malherbe was respected by his students as an effective teacher and a thoughtful scholar.  He was an active member of the Divinity School faculty, who was concerned not only about the academic strength of the School but also about the life of the community.  He was actively involved in the church where he and Phyllis were members, and constantly sought to enhance the ways in which the program on the Divinity School would prepare students for ministry in the church.”

Malherbe the scholar was also interested in Paul and the Cynics, which led him to edit Ancient Epistolary Theorists (1988), a work that is invaluable for students of epistolography and rhetoric. He was one of the first to call attention to the importance of social history in his Social Aspects of Early Christianity (1997, 1983). He also made significant contributions to our understanding of the early Church, e.g., Gregory of Nyssa, Life of Moses: Translation, Introduction, and Notes with Everett Ferguson (1978). Malherbe’s essays have been collected and will appear next year in two volumes published by Brill. The esteem in which he is held as a scholar is evident in two Festschriften: Greeks, Romans, and Christians (1990) and Early Christianity and Classical Culture (2003).

He was born in Pretoria, South Africa in 1930, and after graduating from high school spent several years working as a surveyor and then a draftsperson in the Electrical Supply Commission of South Africa. He came to the United States in 1951 to attend Abilene Christian University, where he received his bachelor’s degree magna cum laude in 1954. While he was at ACU, he met and married Phyllis Melton. They had three children together: Selina, Cornelia, and Jan. From Abilene Malherbe went to Harvard, where he earned an S.T.B. in 1957 and a Th.D. in 1963 under the supervision first of Arthur Darby Nock and then of Helmut Koester following Nock’s death. He also spent a year at the University of Utrecht working on the Corpus Hellenisticum project with W.C. van Unnik (1960-61). Malherbe distinguished himself both in the classroom and beyond. He was selected as the Harvard Divinity School Commencement Greek Orator in 1957. In the same year, he and Pat Harrell co-founded The Restoration Quarterly, a scholarly journal associated with the Churches of Christ.

Malherbe returned to Abilene Christian University, where he held a faculty position in the New Testament and Early Christianity (1963-69). He went back to Harvard as a visiting scholar in 1967-68 and then left Abilene for Dartmouth (1969-70). During his first year at Dartmouth, he attracted the attention of Nils Dahl, who was instrumental in bringing him to YDS in 1970. The combination of Malherbe, Wayne Meeks, and Lee Keck, along with a number of talented younger faculty, made Yale one of the international centers of New Testament study and scholarship.

There will be two services for Malherbe. The family will have a private service for the interment of his ashes this week.  A public memorial service for all who would like to attend will be held on Saturday, Oct. 27, 2012 10:00 AM - 11:00 AM in Marquand Chapel on the YDS campus.  A reception will immediately follow the service in the Old Refectory.

The Malherbe family asks that memorial donations  be sent  to either of two funds: