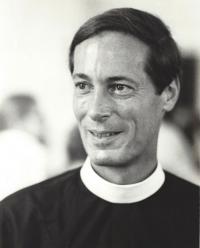 Greer was the author of several books, including The Captain of Our Salvation: a Study in the Patristic Exegesis of Hebrews (J.C.B. Mohr, 1973), co-author of Early Biblical Interpretation (Westminster, 1986), Broken Lights and Mended Lives: Theology and Common Life in the Early Church (Pennsylvania State, 1991), and The Fear of Freedom: A Study of Miracle in the Roman Imperial Church (Pennsylvania State, 1990). As an authority on Anglican history, Greer also wrote Anglican Approaches to Scripture: From the Reformation to the Present (Crossroad, 2006).

He specialized in patristics, the study of the church fathers, particularly the relation between the theological development of the early church and its social setting. His research has included the impact of the Diocletian persecution and the Constantinian Revolution on Christian theology.

“Rowan was an internationally recognized expert in the interpretation of scripture and the early church,” said Dean Gregory E. Sterling. “He also touched the lives of students profoundly. He was one of the great scholars at YDS who leaves an enormous legacy.”

Sterling Professor of New Testament Harold W. Attridge stated, “Rowan Greer was a highly respected scholar and teacher. He made many memorable contributions to the study of patristic theology and Biblical interpretation, including one that I particularly appreciated, The Captain of Our Salvation, on the interpretation of the Epistle to the Hebrews in the fourth and fifth centuries.”

Greer was also an Anglican priest. After earning his bachelor of sacred theology at General Theological Seminary, he was ordained in 1960. He served as curate at two Connecticut churches—St. Paul’s Church in Fairfield, and Christ Church in New Haven. He was a chaplain for Edinburgh Theological College of the Scottish Episcopal Church.

According to Joseph Britton, Dean of Berkeley Divinity School at Yale, “Rowan Greer was the quintessential scholar-priest. His academic work deeply informed his priestly identity, and vice versa, which is why so many Divinity School students looked to him not only as a teacher, but also as a mentor. His presence was deeply felt in the classroom and chapel alike.”

After he joined the Yale faculty, he served as Associate Rector of Christ Church, West Haven, for a few years, then as an assisting priest at St. Thomas’s Episcopal Church in New Haven, and served weekly as the Celebrant at Berkeley’s Morning Prayer.

Carolyn Sharp, Professor of Hebrew Scriptures, remembered, “[He] was there faithfully every morning, always in the same chair in the back row. As the Scripture lessons were read, he would follow along in the original languages, having marked a small Biblia Hebraica for the Old Testament and Nestle Aland for the New Testament beforehand.”

Greer was well loved as a teacher, as much for his style as his scholarship. “Rowan was seen on campus in the company of his beloved golden retrievers, MacGregor and (later) Montgomery,” Sharp recalls. “They stayed in his office; one or the other would come with him to class, snoozing under his chair while he lectured.”

“Rowan taught an unusual range of classes, including History of Christianity I and II, From Hooker to Temple: A Survey of Anglican Theology, Spirituality of the Desert Fathers, and Patristic Greek,” according to Sharp. “He turned student papers back within a few days, always with learned and meticulous handwritten notes covering two, three, even four sheets of yellow lined paper.”

After retiring from teaching in 1997, Greer was awarded emeritus status by the Yale Corporation. He continued to serve the church, moving to Charlotte, North Carolina where he served as curate at St. Peter’s Episcopal Church. He returned to New Haven in 1999 and resumed teaching for two more years.

Attridge said, “He was much beloved as a mentor by a generation of YDS and BDS students.  When lecturing [at YDS] several years ago, Stanley Hauerwas dedicated his lectures to Rowan, as the faculty member who had been most influential on him during his time as a student on the Quad. Many other students of Rowan’s years as a teacher would no doubt echo that sentiment.”

Faculty and students remember Greer as a strong, gracious and thoughtful presence on campus. Sharp explains, “He knew the patristic literature so well—including, of course, the heresies—that he could spot a dubious theological point in a sermon or prayer immediately. Berkeley worship went through a brief phase in the 1990s of naming God as Creator, Redeemer, and Sustainer in place of the standard Trinitarian formula. In those days, Rowan could be heard muttering under his breath about Modalism on his way to morning coffee, but always with good humor. Students loved him.”

The burial service will be private, according to Greer’s wishes. A reception in Rowan’s honor will be held at the Christ Church parish hall on Friday, March 28, from 5:00 p.m. – 7:30 p.m. Christ Church is located at 84 Broadway at the intersections of Broadway, Elm, and Whalley Avenues. You may enter the Christ Church grounds through the gate on Broadway or Elm Street.

Plans for a memorial service at YDS are underway, and will be announced on the YDS website when they are finalized.

This article has been updated to include his service as Associate Rector of Christ Church, West Haven.